After a prolonged period without flying my brain reflects in a negative way about why I participate in this sport. Does the risk warrant the pleasure gained from it? My last flight was back in November and I had missed multiple opportunities to fly due to work commitments and the pressure of family life; was I really committed enough?

It was fortuitous that I had booked the week off work, but the latest bout of tummy bugs was doing the rounds in the family. I had spent most of Sunday evening and the early hours of Monday morning tending to the sick and with just 5 hours sleep, I questioned if I were in a fit state for flying. After I had ingested copious amounts of caffeine, I felt alert and fit for the day so headed to the Dyke! 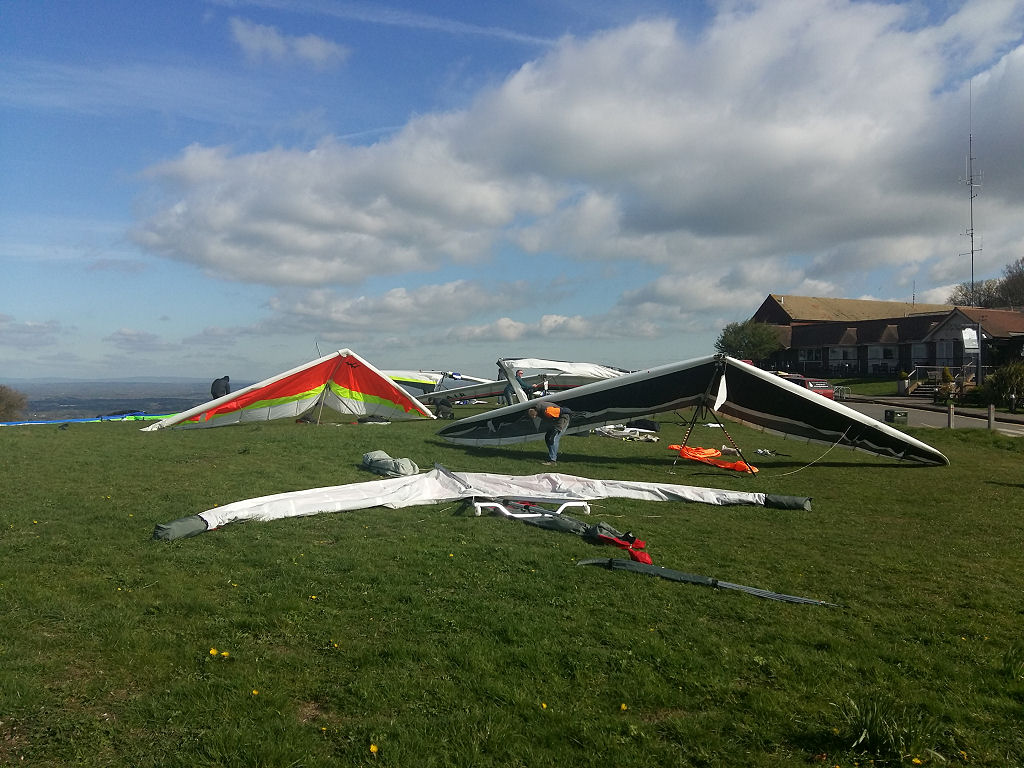 Rigging
Rigging the gliders at the start of what looks to be an epic day!
10 Apr 2017

Unusually for a mid-week flying day, there was a great turnout - I suspected that I wasn't the only one that was eager to get back into the air after a prolonged period of being grounded. There had also been a buzz of activity on the Southern Hangies Forum and many recently qualified pilots were there to catch their first thermals and an elevator ride into the skies. Luke had also committed Taka to give a brief for the day; ideally this had been intended for the novice pilots, but hearing insights from a talented pilot like Taka was an opportunity I couldn't resist. 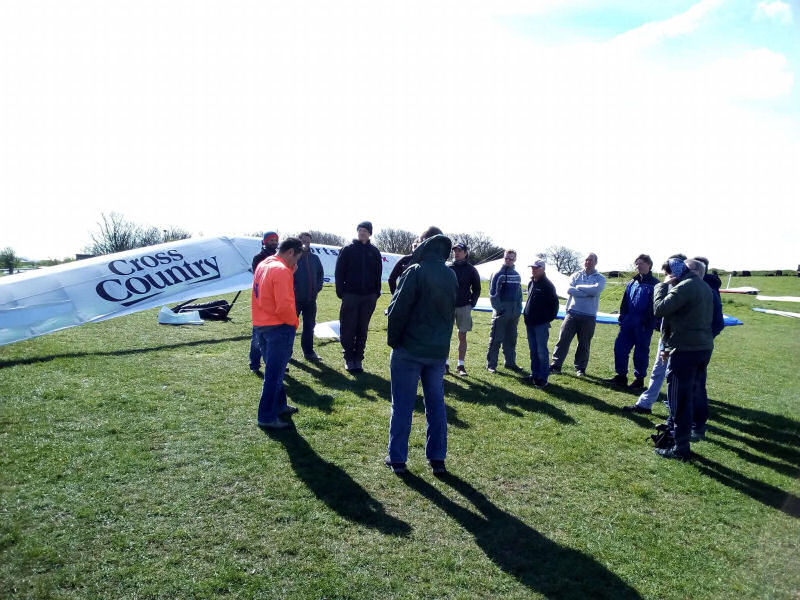 Taka completed the briefing shortly after 11am and as I returned to my glider, I noticed the wind had significantly dropped. Paul C. must have noticed also and quickly made his way to the front and took to the air. I had rigged at the back of the field so had to manoeuvre my glider around all the rigged and partially rigged gliders to reach the front of the hill. I watched Paul for a while and noticed he wasn't really climbing; the air wasn't very buoyant and with it forecast to drop off later, I decided to launch.

The wind was much more northerly than I had expected and was still a little blustery. I launched without event and turned left headed for the main bowl; I barely climbed at all and quickly realised today wasn't going to be as easy as perhaps we had all expected. I beat back and forth along the Dyke ridge trying to work out where the best bits of lift were. It wasn't until I spotted Paul just north of the first bowl on the Truleigh Run, when I realised with the wind coming much more from the north, that this was the place to be. 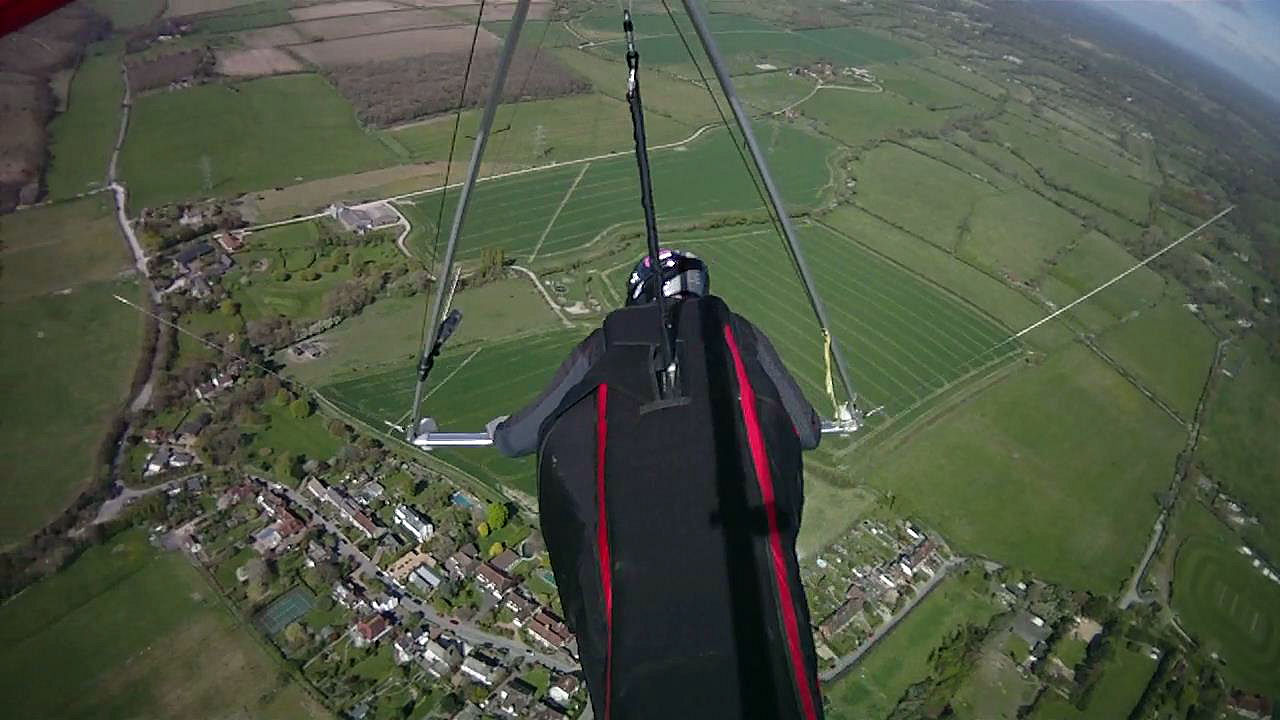 Thermalling Over Fulking
Falling out of a thermal over the village of Fulking.
10 Apr 2017

Paul and I both pushed out over Fulking and were able to climb in a thermal, although staying with it proved problematic for me. As I drifted back to the main ridge, I decided to attempt the Truleigh Run. It wasn't easy, the air was bumpy and I didn't really connect with any significant lift, but made it, albeit only 50ft or so above the ridge! 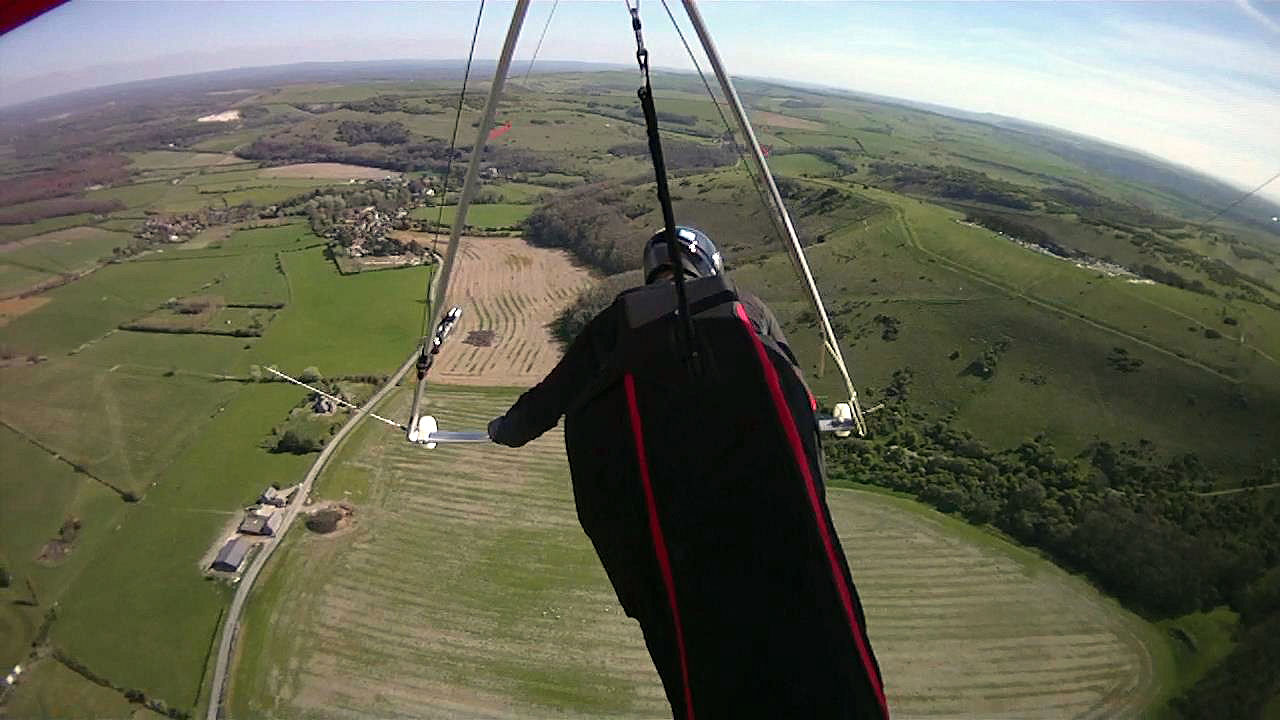 Looking Back at the Dyke
Drifting back in a thermal headed for the Truleigh Ridge.
10 Apr 2017

I normally connect with something at Truleigh Hill, but today was a total disaster - any bit of lift was met with an equal amount of sink moments later. The result of which meant I had to spend most of my time scratching back and forth, sometimes flying a little closer to the hill than comfortable! It wasn't all bad; I had some fantastic close encounters with some Buzzards that were in the same predicament as I! 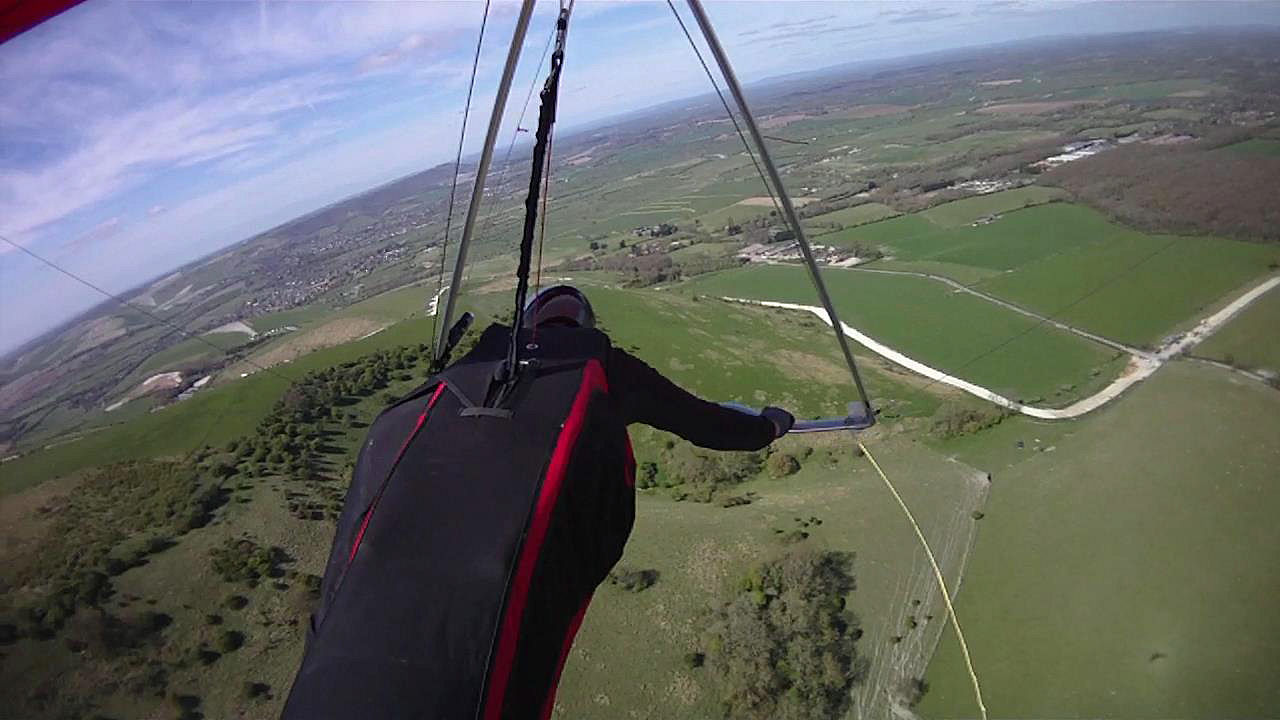 Truleigh Hill
Over Truleigh Hill with Steyning in view and the Rampion Wind Farm cables below.
10 Apr 2017

Eventually due to more luck than skill, I managed a moderate climb and decided to head back to the Dyke. No-one else had dared the Truleigh Run (probably wise) and as I returned to the Dyke, I could see plenty airborne, all scratching and with a significant number landed in the top landing field. By the time I reached the Dyke, I had found myself just below the ridge and was desperate for a climb to permit a safe top landing. Unfortunately it didn't happen and so began my slow but certain descent to the bottom landing field. I hadn't quite resigned myself for a bottom landing and tried much harder than perhaps I had ever done before to find a low save, I hugged the hill and tried to eke out that one magical climb. I almost pulled it off when I connected with a punchy evil thermal at the north end of the Dyke, just below the modeller's bowl, but it spat me out with disgust and set me off for an imminent bottom landing. 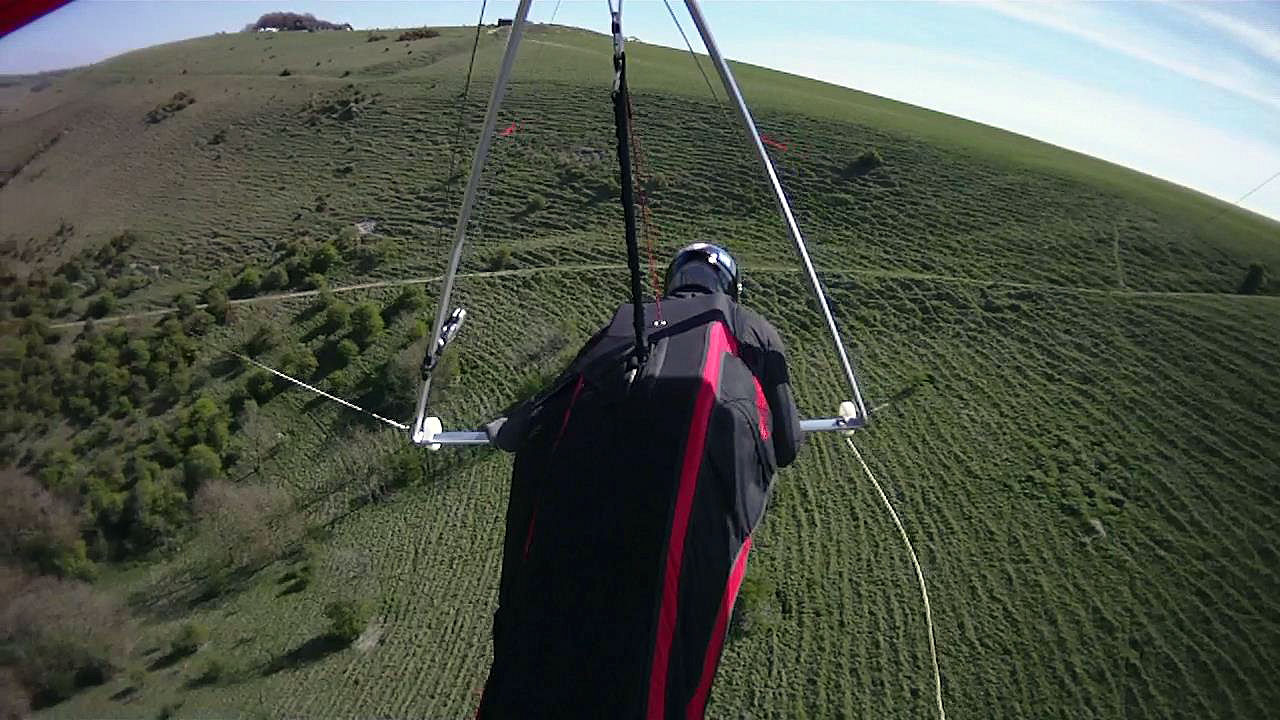 Scratching
Almost game over; the lift cycle drops off and I scratch along the ridge trying to eke out some lift for a safe top landing.
10 Apr 2017

I did however have one final smug moment - I wasn't going to be the first down! Tim D. had also succumbed and was 100ft lower than myself. I watched him land then set-up my final approach; I connected with not one but two thermals (why does that always happen at the most inopportune moments?) and seriously began to consider that I may overshoot the bottom landing field; the outcome of which would not have been nice! Needless to say, I landed with plenty of field to spare - I was knackered, thirsty and ecstatic - what a wonderful flight! Does the risk warrant the pleasure gained from it? Hell yeah! 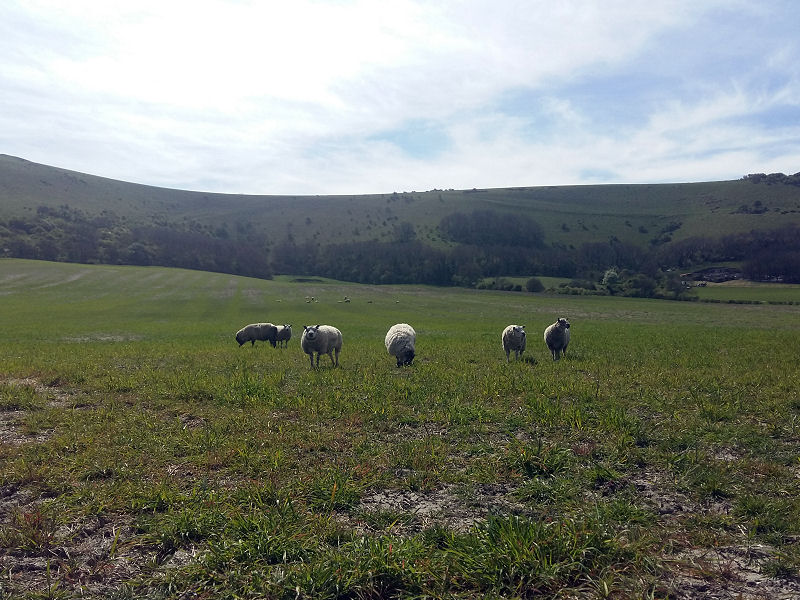 Devil's Dyke
Finally, my first flight of 2017. This is my video highlights of my 39 minute flight at the Devil's Dyke. It wasn't quite the epic everyone had hoped for, but a lovely day soaring with Buzzards, Kestrels and friends - looking forward to many more days like this to follow!