The Shadow Beneath Me

I'd only made it to Suffolk once this year and I was eager for one last trip there to see the team before the year ended. The forecast for Sunday was looking perfect with a light westerly wind blowing straight down the runway. My first shock of the day was the increase in the Dartford Crossing toll; it was now £2, a 50p increase on last time! Fortunately, I found some spare change in the glove box as I approached the toll barrier!

Arriving at Mendlesham I was once again warmly greeted and pleased to see some new faces. More pilots had turned up on the day than expected, so a helmet queue was set-up and one by one, pilots were winched into the air. The weather was perfect, blue skies, a gentle westerly breeze; all ideal for easy takeoffs, smooth tows and stress free landings, just what I needed after too many months without any winching!

My first tow in too many months and I was happy; everything felt natural. After launch I very carefully checked which release lever I was going to operate as I didn't want to double release. Thereafter it was smooth all the way up to 690 feet ATO where I released. After release I pulled on full VG, stuffed the bar and screamed (as fast as I can on the Sting), back to launch. A quick couple of 360's lost my remaining height and I touched down will a full flare, embedding the end of the keel in the soft mud in the process! Apparently it looked like a perfect landing!?

The only notable event on this tow was a small thermal lifting the glider during tow and snapping the weak-link. Fortunately this happened almost at the top of the tow so I was able to enjoy the full descent back to the landing area, prolonged a little longer by that small thermal that I found again when returning to launch!

The sun was low in the sky and the small fluffy clouds from earlier had now dissolved hinting that nothing was really happening in the air. As expected, the tow was smooth all the way up to 700 feet where I released. Unknown and invisible to me was an inbound Shadow Ultralight, flying low towards the Mendlesham runway. The first I became aware of this was when it passed directly beneath me as I was losing height by doing a few tight 360's over the hanger. I did wonder if the pilot of said aircraft had actually seen me and for a few moments wondered what might have happened if all this had unfolded 30 seconds later! With those closing thoughts I set-up and safely landed beside the runway.

I had decided this would be last tow of the day for me as I didn't want to be de-rigging and short packing my glider in the dark. Other pilots had been doing a little out and return, that is, see how far they can fly from the winch and return for a safe landing. Most had made it just beyond the northern perimeter road, so this was my challenge. The wind was still a westerly but had dropped. Take-off required a bit of a run compared to earlier launches, but the tow to 700 feet ATO was smooth. After releasing I pulled the VG full on and set off towards the northern perimeter road. I bottled out about 200 meters short and turned tail to return to launch, fearing I wouldn't make it all the way back. It was an ill-founded decision and I easily made it back to launch with height to spare.

Safely down, I retreated to a patch of grass and packed up my now damp glider ready for the return journey to Sussex and that �2 toll fee! 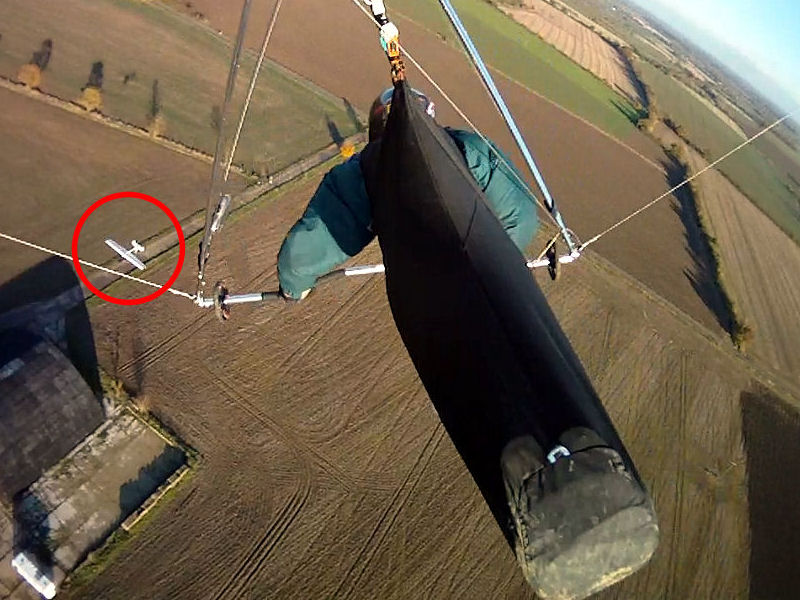 Aircraft Below!
The Shadow Ultralight passing beneath me as I tightly circle to drop height ready for a landing - 30 seconds later could have made for an interesting situation!
11 Nov 2012