A Perfect Day at Bo Peep

I'd been very apprehensive about flying with my new harness and after studying many YouTube videos, exploring techniques others were using to climb up onto the uprights for landings - I was convinced of the need to change my own technique. Mentally I had rehearsed this over and over again, and as Saturday came, I committed myself by leaving my old harness at home! If I was to fly, it would be on the Myth!

Only wanting to change one variable at a time, I left the U2 at home to concentrate on improving my landing technique with my familiar Sting 3:168. I arrived at Bo Peep and saw pilots were already established above and the rest were congregated just east of the car park where they rigged their gliders in the lee of the bushes.

By the time my glider was rigged and I had mentally rehearsed my flight, the wind had increased and was a little gusty. I worked myself towards the front of the hill and allowed my glider to bump and yaw around above me as the gusts blew across launch. Ideally I was waiting for a few minutes of smooth air, but when I noticed another glider patiently waiting behind me, I decided to launch. A good solid run with the bar pulled in stabilised the glider and I took to the air. I turned to the east and slowly made my way towards the paraglider bowl! This is where the vast majority of the other pilots were flying, a sure sign that most of the lift was there. 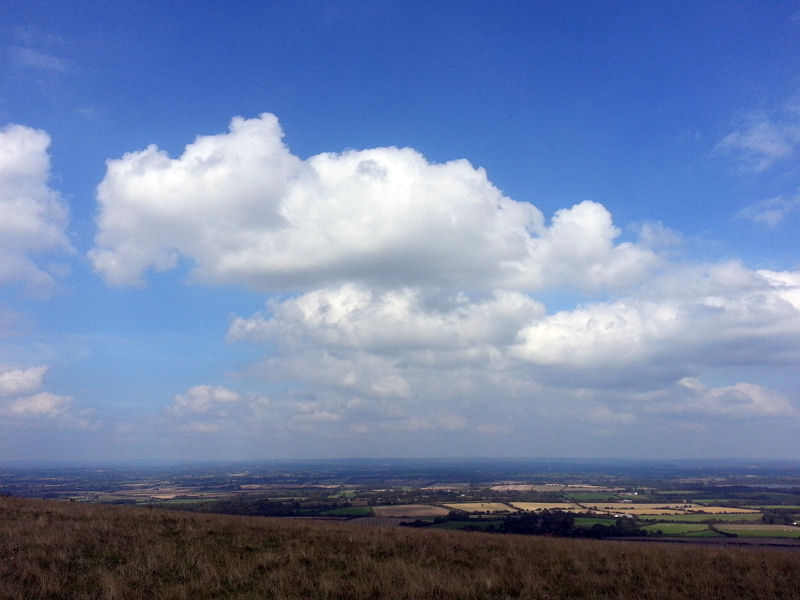 At times the airspace was busy and with some rough spring like thermals bubbling up, you certainly had to keep your wits about you to avoid un-intentional wing lifts followed by changes in direction! After 30 minutes of airtime, I had worked my way several times up to 1200 feet above take-off and was feeling more comfortable with the harness. I was able to push out beyond the byway out front and safely return to the hill - quite an achievement considering the strength of the wind.

My new top landing set-up involved staying in prone, looking towards the right upright then grasping it at the bottom with my right hand, then then looking to the left upright and grasping it with my left hand. All the time remaining in prone and flying the glider. The reason I had adopted this technique was that I had got into a bad habit of wilding swinging my left arm out to grasp the left upright. This worked fine with a harness and glider I was familiar with, however, upon changing harness my reference points were totally un-calibrated, so without the visual reference obtained from looking at what I was doing, I was able to get my arm caught in or wrapped around the wrong side of the rear wires! This was a significant factor in my crash earlier this year and some recent poor landings (check out some of my recent videos!). 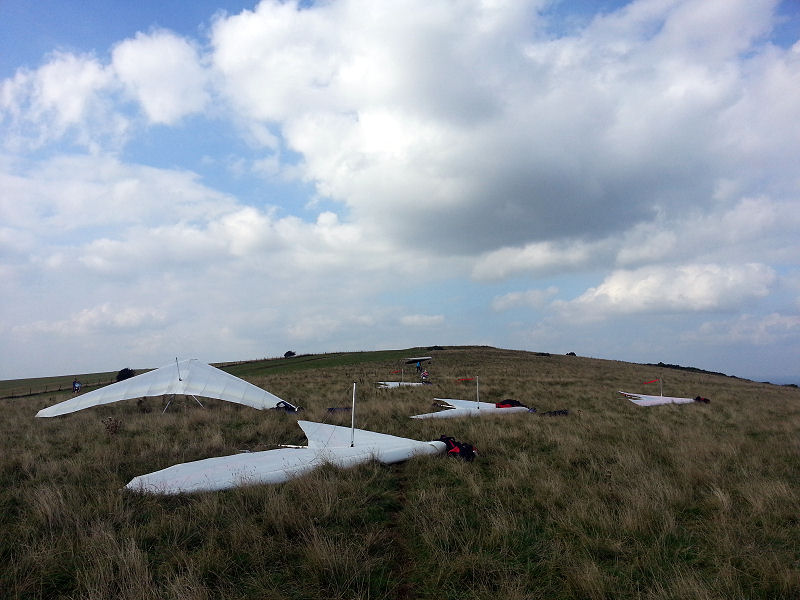 Top Landing
My first flight concluded, I join the others that have sensibly landed behind the main bowl (often referred to as the paragliding bowl).
13 Sep 2014

Whilst at altitude and clear of traffic, I practiced this over and over, all the time monitoring my airspeed to see if I was easing the bar out (another factor in my crash). Once satisfied I was doing this correctly, I moved on to stage two - getting into an upright position. This was surprisingly simple once both hands were on the uprights; just letting my feet out and pulling upwards rotated me perfectly. Again I rehearsed this over and over, monitoring my pitch inputs carefully. If anyone on the ground had been watching me 1000 feet up, they were probably wondering what the hell I was doing!

After well over an hour I was starting to get tired and felt ready to top land. For a 70+ hour pilot, I had never been so apprehensive about landing. Most of the lower airtime hang glider pilots had sensibly landed at the larger top landing near the paraglider take-off. I decided that I'd join them. Just before I started my approach, I moved each of my hands onto the bottom of the uprights then flew a crabbing circuit from the east. Apart from my target fixation on the footpath sign, I gently touched down and to my relief, it was perfect! 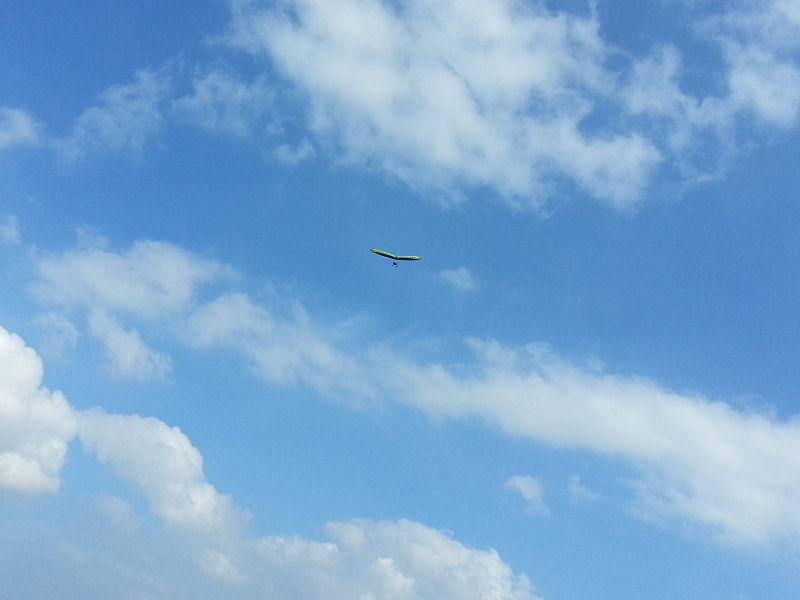 After working my way towards the other hang gliders, I dropped my glider and recovered my thermos flask (I now stow this in the tail compartment of my harness - a great feature of the Myth 3).

I was happy with my flight and seriously considered concluding my day there and then - the wind had certainly increased, so this would have been the better option in my opinion. That said, this little area of the hill became quite social so I chatted and met some new faces and debated the conditions and the various aspects of this fantastic sport. 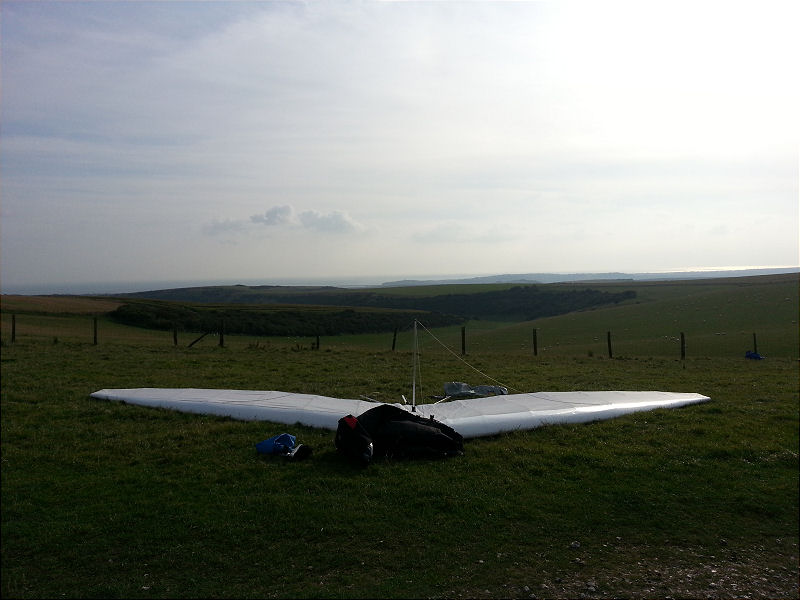 The Day Concluded
Safely top landed near the car park ready for a short carry back to the car - what a lovely end to the day!
13 Sep 2014

After an hour or so, the wind had eased, so I assisted others to launch then returned to my glider. After checking it over with a view of floating it and walking it back to the car park, I ended up clipping back in and moving towards the paragliding launch (I'm not even sure why I did this). I was assisted to launch where I once took to the air. After 5 minutes a huge grin had developed on my face; it was lovely! The air was silky smooth with the odd weak thermal that I was able to work to around 1000 feet above take off. Most of the others had now landed, so for over an hour I enjoyed the freedom of the skies above Bo Peep before deciding it was time to land and head home.

The air was exceptionally buoyant and after several failed attempts at landing behind the paragliding bowl, I thought I'd try my luck at the car park end of the site. I knew I was high when I started my approach and as I moved on to the uprights, I could feel the harness strap digging painfully into the right side of my crotch - I think I'm going to have to add some padding to the harness straps! I almost overshot, but being keen to get down on that attempt, I allowed the glider to crab to the east where eventually, the ground rose up to meet me.