Driving along the A27 the sky looked overcast but with some potential. Showers had been forecast and I was hopeful nothing would come of them.

As I continued along the A27 (Ranscombe Hill) I saw Ozzie then John B with gliders on top of their vehicles passing in the opposite direction. I was destined for Bo Peep with the NNE forecast but I was also contemplating Swanborough, a private site that I've not yet flown. Swanborough had added appeal because I had expected hoards of paraglider pilots at Bo Peep. It's rare to find them at Swanborough. I had made up my mind, so I pulled off the A27, dialled Will's telephone number (a requirement if you're to fly Swanborough) and left a message on the office answer phone.

I then headed back along the A27 where I drove through Kinston and met John B and the Southdowns Hang Gliding School on the track leading to the Swanborough takeoff. After a quick chat with John I discovered he'd lost a couple of his students en-route. I volunteered to find them. On my first attempt I found a young woman and drove her to the top of Swanborough but this turned out to the wrong person. I had more success on my second attempt and found a nice couple parked in the garden centre car park just outside of Kinston.

As this was my first time at Swanborough and with the wind direction not being ideal (NNE), John B kindly gave me and some other pilots a full site brief. After that, I watched a few others launch and beat back and forth in what I can best describe as scratchy conditions.

I watched two of John's CP students soar for a while and bottom land then I was ready. I had secured my camera to the keel (it's always nice to get video of a new site) and made my way to launch. I watched Ozzie launch then John helped me with a hang check before I also launched joining Ozzie in the air.

Swanborough itself is a stretched out bowl. With the wind slightly off to the north, I concentrated most of my efforts on the south spur of the bowl. I considered the north spur to be full of rota so avoided it. It was certainly scratchy and my initial beats didn't get me much above takeoff height.

Ozzie and I both danced around each other trying to catch something that would take us higher. There was definitely something brewing as my glider was occasionally jostled around by broken thermals whizzing through. Ozzie was doing slightly better than myself as he always seemed to be 20 or 30 feet above me. Eventually Ozzie top landed leaving the whole bowl to myself. For the next 20 minutes I scratched around until I felt some air that was certainly more buoyant than anything I'd been in previously. 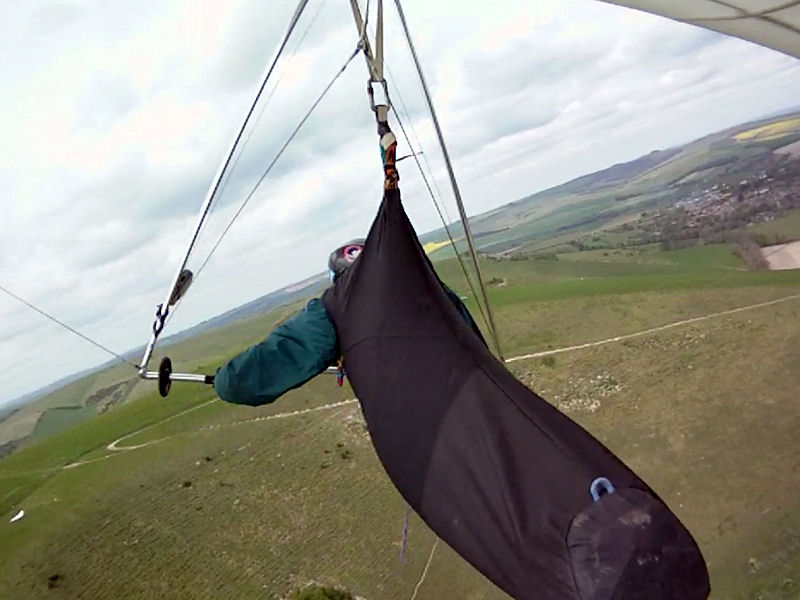 Swanborough
Scratching for available lift in the Swanborough Bowl.
14 Apr 2012

I started to 360 and with each orbit my vario continued to emit its happy climbing beats. I worked this well and drifted a short distance over the back where I lost the thermal. This left me around 900 feet above takeoff. With sufficient height, I worked my way back up wind and headed for the next bowl north of the main Swanborough bowl. Almost instantly I connected with another thermal, probably kicked off from Kingston, and began to 360 again. As before, I drifted over the back with the thermal and I started to feel a little colder as I climbed. I maxed at 1684 feet above takeoff and for a few moments contemplated a downwind dash to Falmer Stadium (I could see this very clearly from my vantage point). But as John B said, I became victim of a phenomenon called "Hill Suck" and returned back to Swanborough.

I missed my first opportunity to top land and ended up scratching back and forth in the bowl again. After another 5 minutes of this I gained enough height to top land. During John's earlier site briefing he had warned me about the wind gradient on top of Swanborough. Sure enough, as I began my turn into wind, the glider dropped quickly. Tightening my turn remedied the situation and I gently touched down a short walk from my car. 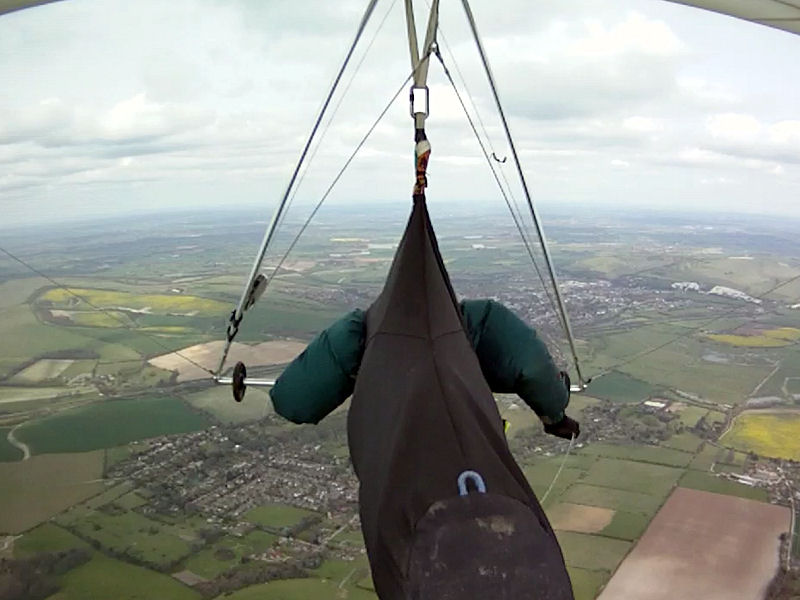 I regretted not flying with my water pack and drank some much needed fluids rehydrating myself in the process. I left my glider upright but angled against the wind then made my way back to the front of the hill. There, I talked with some of John's CP students and assisted some other pilots to launch.

After a good 30 minutes rest I decided on one more flight. Ian helped recover my glider from the top landing field through the gate to launch where I once again took to the air. This time I shared the airspace with one of John's CP students. I think this was his final soaring flight before being signed off as club pilot. He was doing exceptionally well. The air was certainly lively in places so I gave him (and myself) plenty of room. 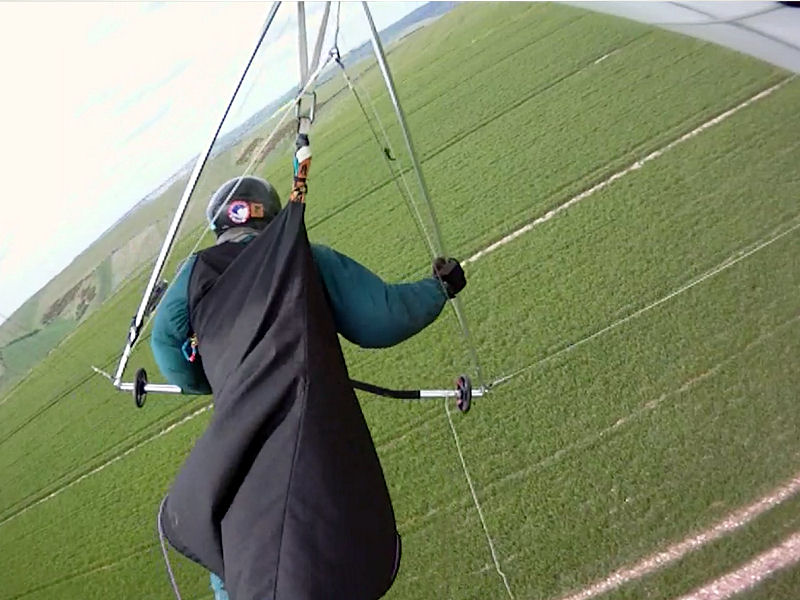 Swanborough
Coming in for a top landing, a tight turn gets me down in time.
14 Apr 2012

Soon I was high enough to top land so I grasped the opportunity and safely landed back on top. That was me done for the day and what a day it was! As I began to de-rig my glider, Ozzie landed beside me, alighted, came up to me and shook my hand and congratulated me on a great flight. Top of the stack - there's a first!