I was one of the first to arrive and with the fresh wind forecast to drop off later I rigged my glider on arrival. The wind was very westerly so it was obvious that we'd all be soaring over the Devils Dyke pub. As more and more hang gliders arrived, it was evident that the airspace was going to be busy, so I was motivated to get into the air early to avoid the crowds and for some time to get used to the new harness.

I was the first pilot ready and with some assistance from Ozzie, was manoeuvred to the front of the hill where I launched. Almost immediately, I realised I was hanging too low so decided to adjust my hang point on my next flight. Out in front I spotted black birds all enjoying a thermal so advanced in their direction. As I bullied my way through they all dispersed in every conceivable direction and I was rewarded with a few beeps from my vario. Thereafter, I established the normal back and forth ridge soaring pattern, occasionally connecting with small punchy thermals that I was able to work to around 500 feet above take off.

An Ugly Landing
While still getting used to my new harness, I bottom land at the Devils Dyke and am not quite prepared for the wind to be so far off to the west!

Eventually I was joined by another flex wing and the two of us yo-yoed up and down in the sporadic thermals that rolled through. Models were flying in the modellers bowl and with so much west in the wind, the bowl was pretty much ruled out due to turbulence. This limited the available airspace and as more and more pilots took to the air, this further added to the challenge!

The rigid wings piloted by Luke, Miles, Ozzie, Steve and Chris operated at their own flight level, about 100-200 feet above the flex wings, but occasionally dropped to our level when the lift cycles became few and far between. Trying to exploit the thermals became all but impossible for me for fear of 360'ing into traffic, so I adopted a more conservative flight plan.

After well over an hour in the air, the wind dropped off and the paragliders that I had seen neatly laid out on the ground in front of the pub took to the air. Eventually, I conceded and as I dropped below ridge height, decided now was the time to bottom land. This had in fact, been my intention from the outset as I knew I was going to have problems getting out of prone in the new harness. I therefore wanted time to allow for this on my landing approach. Unfortunately, what I had failed to recognise was the wind hadn't dropped off, but had in fact swung around almost as far as west of south west! The net result was an ugly high speed landing approach, further compounded by the difficulties of getting onto the uprights! As I landed, I dropped the nose, very reminiscent of my earlier flying days, however, I was pleased to be safely down!

I was shortly joined by a family that were interested in what I was doing. After a quick chat, I took some photographs for them of them alongside my glider. I then noticed that pretty much all the pilots above were now succumbing to the newly established wind direction. Some managed to pull off top landings, but the rest were destined to join me at the bottom. This added for some extra entertainment for the family as I pointed out their imminent arrivals. I was amused by the children and adults all squealing cries of excitement as they announced, "There's another one!", as each pilot began their final landing approaches!

There was only one aluminium breakage but of more interest, there were some notable pilots in the bottom landing field! After I packed up I decided that was it for the day so headed home. Later I learned that the wind eventually veered back to a WNW direction and some hangies enjoyed the air beyond sunset! 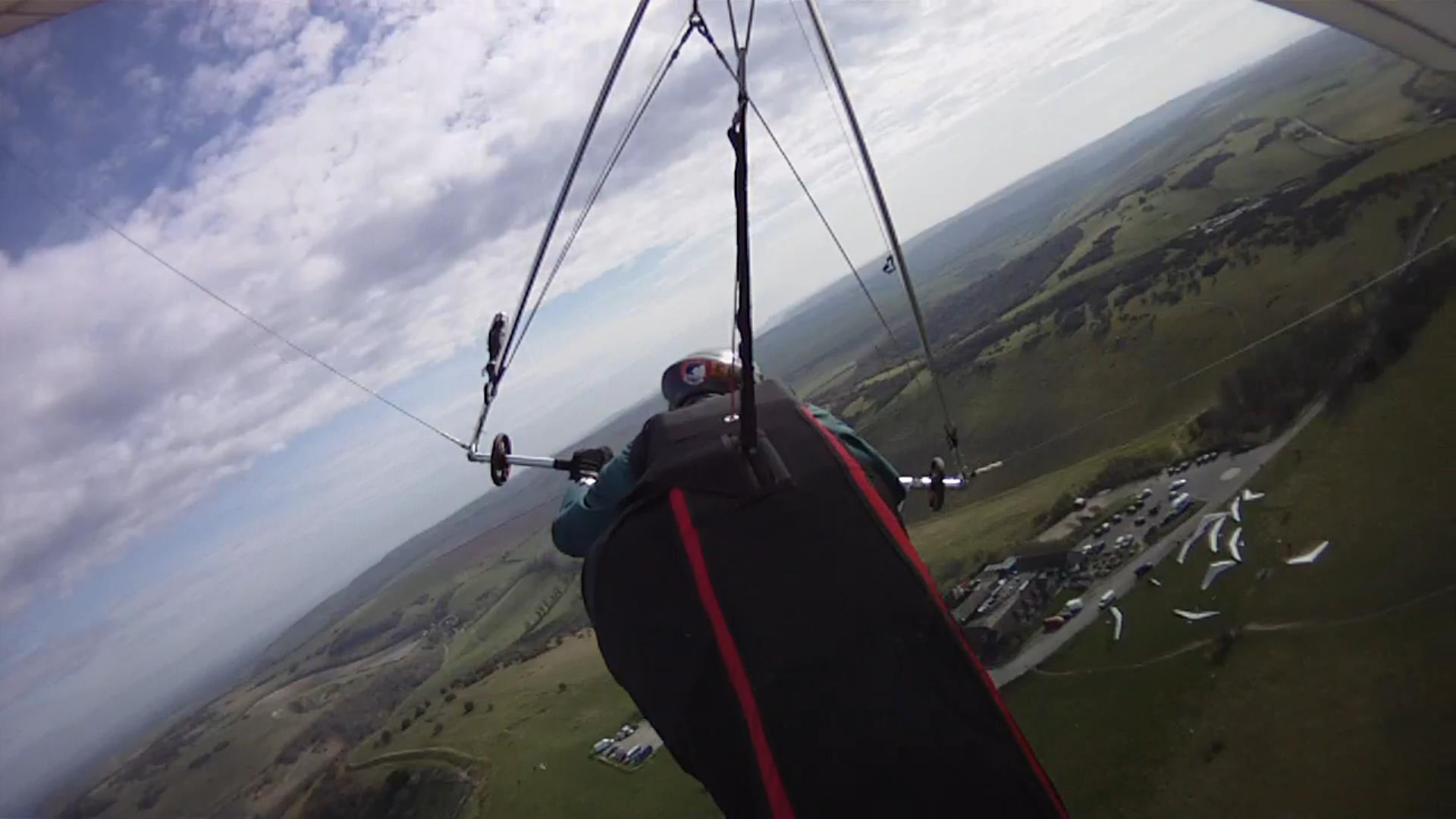 Thermalling over the Devils Dyke Launch Area
Before the sky gets too busy, I am able to exploit a few thermals over the Devil's Dyke - remembering the club rule of right-hand 360's!
15 Mar 2014 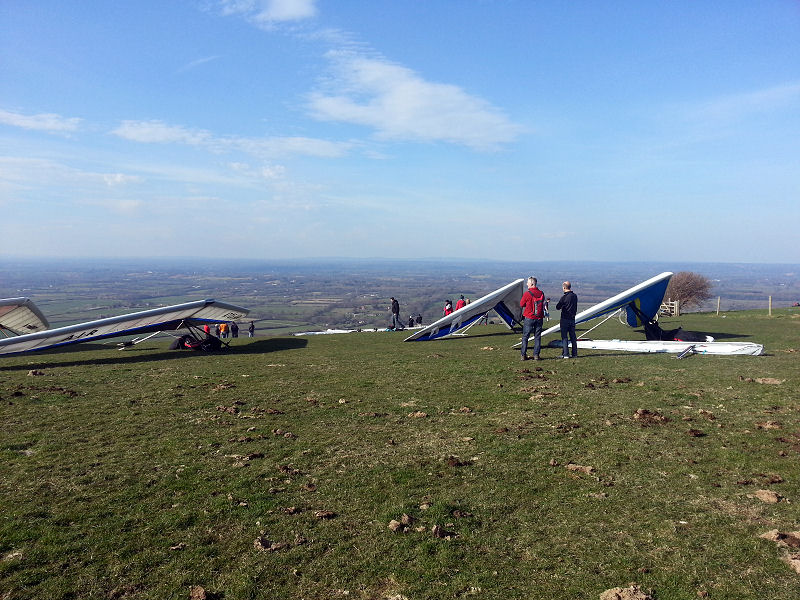 Devils Dyke Launch Area
As the wind backs to a west, south west, everyone assumes this is the end of the day and start to pack up!
15 Mar 2014