A Trip to the Clouds and Beyond

With almost 6 months passed since my last flight I had seriously considered putting hang gliding on hold. With the new additions to my family, simply finding time for hang gliding was near impossible. On Sunday I had visited Bo Peep with my partner and she obviously saw a longing in my eyes, so when I mentioned Tuesday looked promising; she made arrangements which meant, for the first time in a long time, I could visit the hill with intent to fly!

I wasn't the first to arrive at Bo Peep; Steve was already airborne, John B and Adam were rigging and Johnny Carr was out too! Ian W. arrived later with his Target and new supine harness that he intended to try. The wind was cold and strong, but not as strong as last Sunday where some had chosen not to fly. Cloud base looked low and the sun occasionally peeped through the odd patch of blue that periodically opened up in the blanket of cloud covering the sky. With the wind forecast to increase later, it wasn't going to get any better. 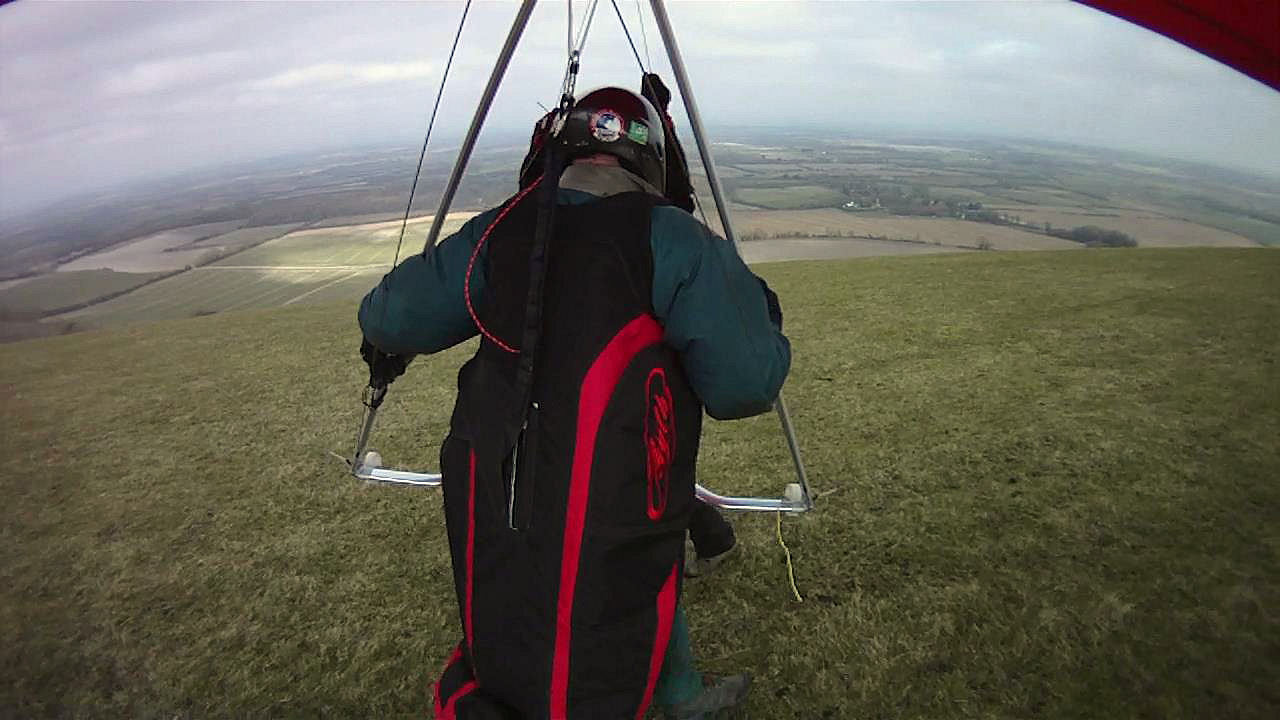 John and Adam had already launched and both experienced rough air - mental note made for my own launch! Ian had somehow rigged his glider before I was ready, so I assisted him to launch. However, as I looked at his glider I noticed a strange bend in his left side wire. Prudently, Ian postponed his launch until a closer inspection later revealed it was just a bend with no broken strands!

Ian assisted me to launch and I took to the air. Just like John and Adam had experienced, I too hit some rough air during take-off. I pulled the bar in and accelerated the glider and punch through it and was soon established in the lift, headed eastward towards the paraglider's bowl.

For the apparent wind strength, the air wasn't particularly buoyant; although I find colder air always seems to feel stronger than it actually is. The wind also had a northerly component to it and at times came through pretty strong. I found the north facing sides of the bowls generated more lift and the easterly facing bowls a source of sink and rough air! 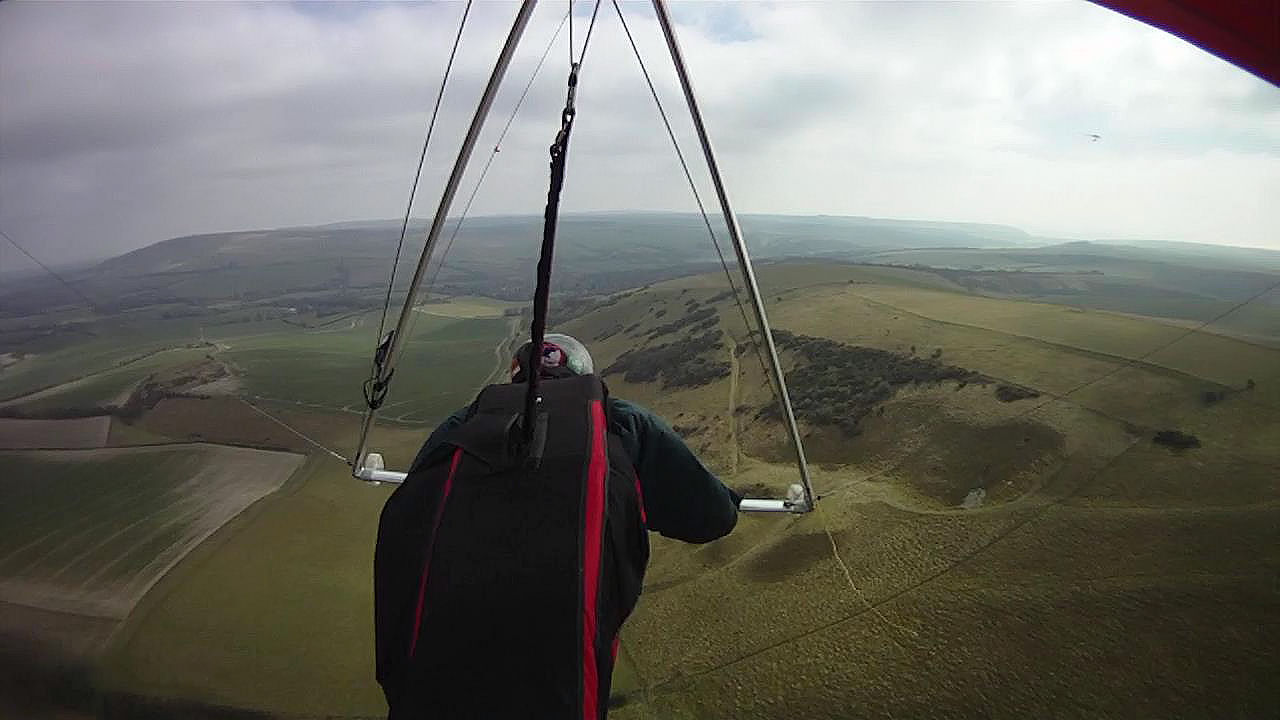 Airborne
Safely into the air and climbing in the paraglider bowl at Bo Peep.
15 Mar 2016

This was the first flight on my U2 with the custom hang loop that I had fitted at the tail end of last year. My position was now perfect but alas, something had happened to my vario. It had somehow reset to factory defaults which meant the sink tone sounded almost constantly and the units were now in metres as opposed to my familiar units of feet; I realised this when my vario read what I thought was 90 feet above take off and from my vantage point, looked significantly higher!

My flight was mostly lonely with Johnny Carr predominately doing well high above Firle Beacon (his first proper flight in a while) and John, Adam and myself using the rest of the ridge with Ian eventually joining us on his Target. At one point I enjoyed a short lived thermal with John where we both orbited it together before it dissipated and we went our separate directions along the ridge. 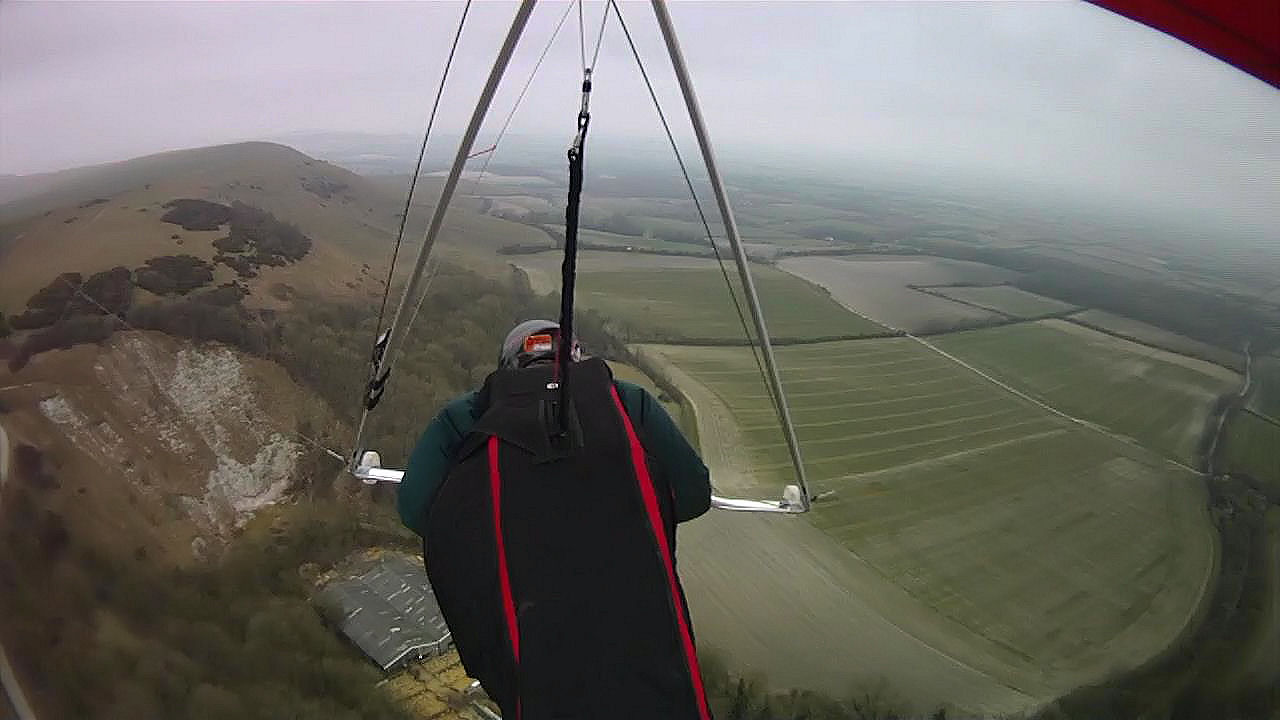 After 45 minutes had past most had top landed leaving myself to enjoy the entire ridge from the Tumuli at the south east end of the ridge, right up to Firle Beacon (I daren't go around the corner for fear of not making it back). I could clearly see Firle and I must admit I was tempted to go around, but I had noticed that Johnny hadn't and this was probably for a very good reason!

Several Kestrels soared the ridge with me and I was mesmerized by their elegance as I gently floated above them. Of course, the moment they realised I was there, they darted off in a flash. 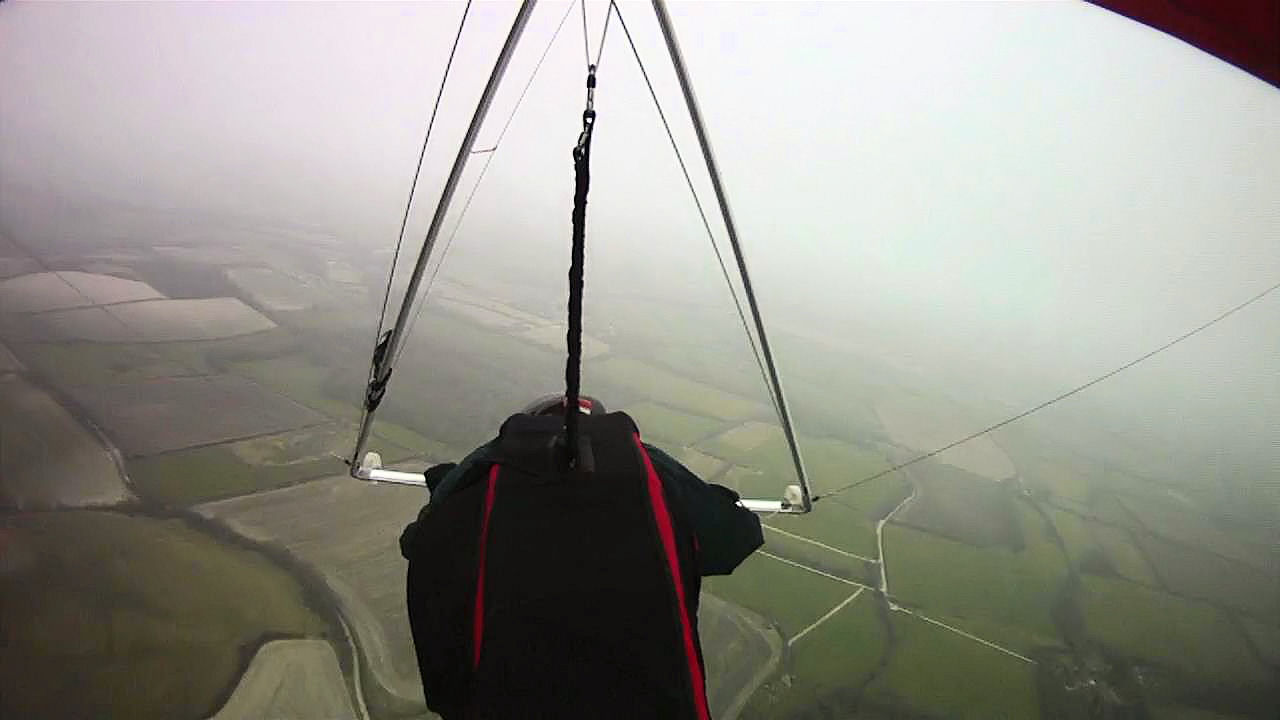 Nearing Cloud Base
Gently turning in lift at Firle Beacon the cloud base is getting very close!
15 Mar 2016

On my final climb from Firle Beacon, the glider climbed with unbelievable ease - no matter which way I flew the vario continued to squeak its happy chirps. I looked to my left then to my right and realised I had reached the base of the clouds. As I looked directly beneath me an eerie mist had formed and as it grew thicker, it shrouded the ground features below! It suddenly dawned on me that I had not only found cloud base, but the cloud suck that accompanied it! Uh oh! Arlington Reservoir was the only ground feature I could make out so I pointed my glider towards it, pulled in and accelerated the glider. 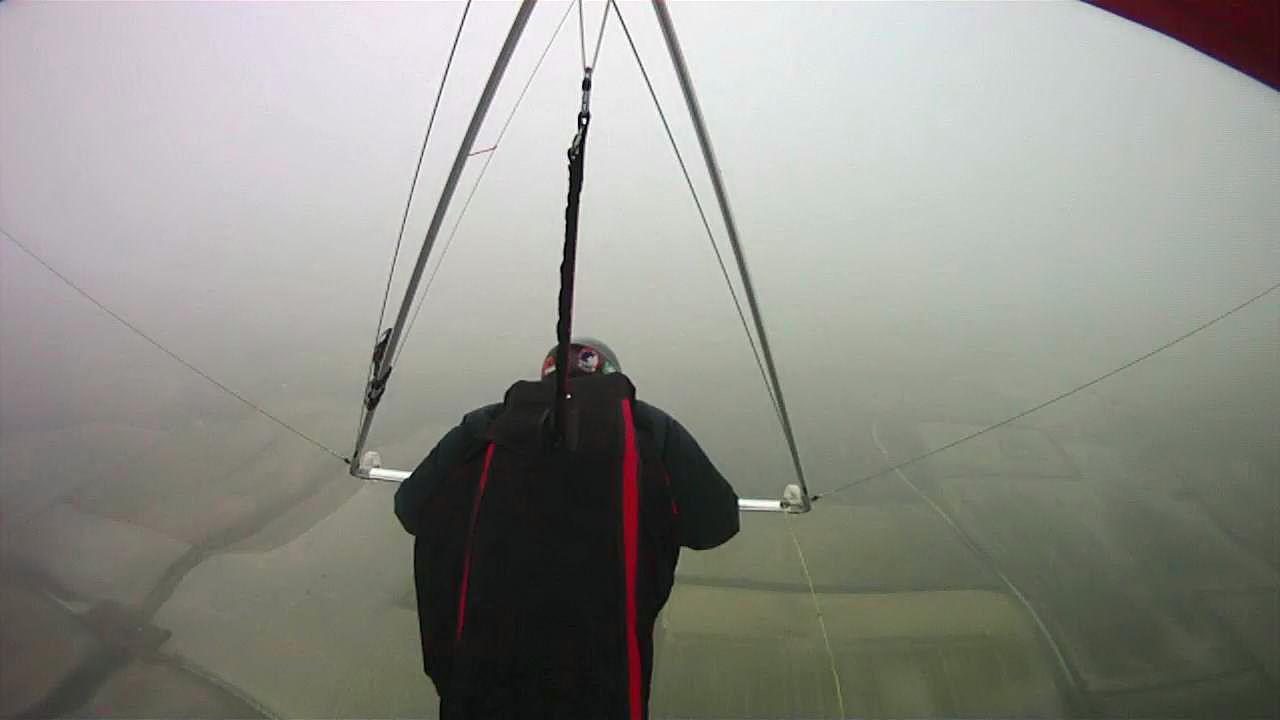 By the time I had cleared cloud, I was practically over the A27 still with plenty of height. I had to find a suitable landing spot and with so many power cables north of the A27, I elected the first field to the east of the Bo Peep lane / A27 junction. It looked flat, so I commenced a long final orbit of the field to lose height and set up my landing approach. The final moments were a little hairy when I realised the field was indeed not flat and I encountered turbulence/rotor, but I was down in a fashion, not elegant, but in one piece without event.

A while later I managed to contact those still up on the hill. I hadn't stowed any of my glider packing; it was still in my bag on top of the hill (lesson there!). Ian White very kindly recovered my packing then came down to retrieve me and my glider - a big thanks to Ian! 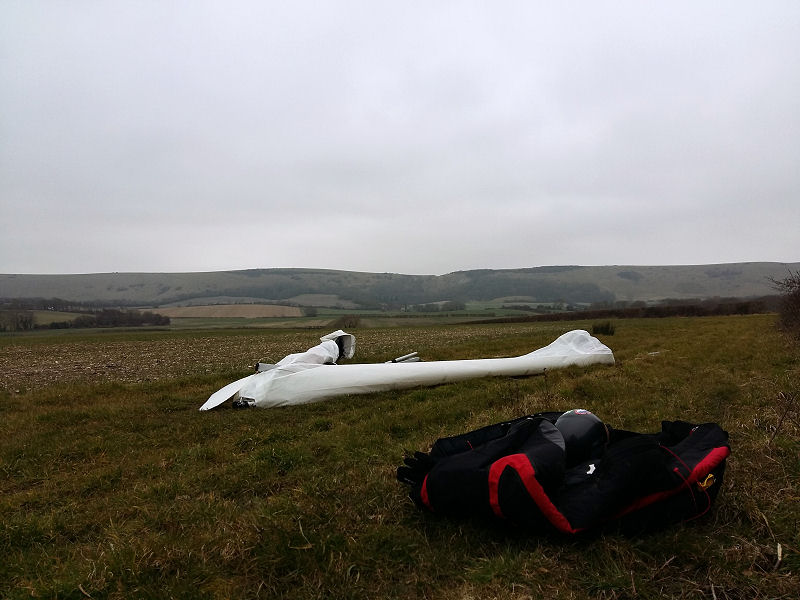 Packing Up
After my short cross country where I landed at TQ507064; I pack up my glider and await the arrival of Ian who kindly recovered my glider kit bag from the top of the hill.
15 Mar 2016

To The Clouds and Beyond
My memorable flight at Bo Peep where I finally reached cloud base, had my longest flight to date and completed a small XC. The only negative : the video camera battery didn't catch the most interesting part at the end! 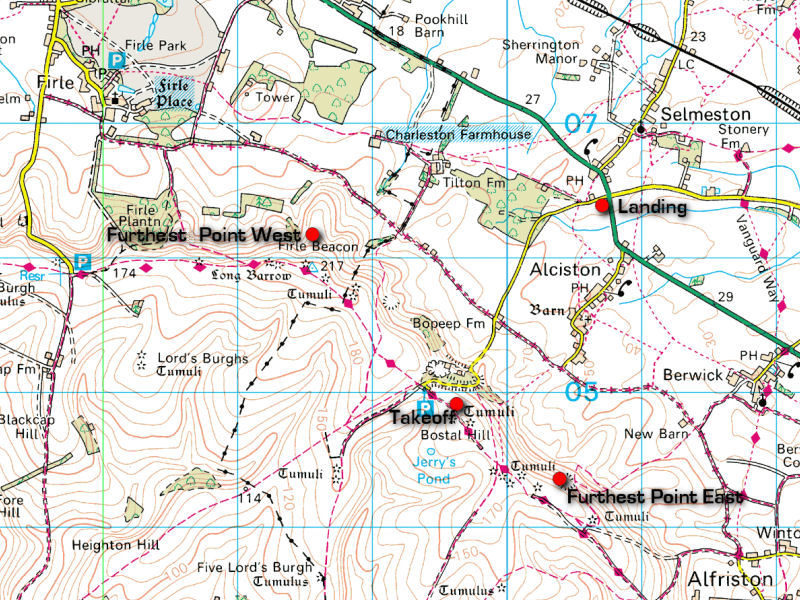