Truleigh and Back - 4 Times!

My first arrival at the Devil's Dyke revealed the hill covered with orographic cloud. I was amazed to see the faint image of a couple of paragliders already flying. The hangies were not enthusiastic so retreated to the pub for a coffee (thanks John for the latte). We then got talking about my recent video published on YouTube (Landings 2010-2014) and some of the issues I had had regarding my new harness. It was at that point that I had a horrible feeling that I'd left my harness at home! A quick trip to the car confirmed this, so off I set to retrieve my harness.

An hour later (I drove legally!), I was back and the orographic cloud had cleared. The wind was light and many paragliders had taken to the sky. I was reasonably confident that it would improve later so began to rig my U2. By the time I was ready I could only see Luke on his rigid wing flying amongst the many paragliders although I knew there were other hangies up there somewhere (Ollie, James etc). The cloud base was still low, lingering around 300-400 feet above the hill, but that didn't appear to matter as everyone was scratching around at ridge height.

The wind was blowing around 10-15 mph and coming from a north, north-west to northerly direction. I was ready moments before John, so together we both worked our way towards the front of the hill. At the front I patiently waited for a gap in the paraglider traffic and for a bit more of a breeze. The conditions were light and I knew I had to go for the northerly ridge straight after launch. A gap in the traffic soon opened, but the breeze was a little lighter than I would have liked, but I decided to launch. I ran hard down the hill before I was lifted into the air. I re-checked airspace then turned left and followed the contour of the hill around the bowl and onto the north facing part of the ridge.

To my surprise my vario squealed happy beeps confirming I was above the ridge by 100 feet or so. My first dilemma was which way to go? Behind me were hordes of paragliders all scratching around in weak lift and westwards along the ridge were other paragliders braving the north facing bowls. It was a numbers decision and with space along the ridge towards Truleigh and with far less traffic, that's where I headed. I was still at the same height as the paragliders so decided to pull the VG to the 2 mark (half way on) to see what difference it would make. The U2 began to feel a little stiffer in handling and as I approached the first paraglider, I passed him ridge side then arrived at the pylons. I wasn't very high. The paraglider had turned back and being 80 feet above the ridge I took the risk and crossed. There was still some west in the wind so progress was slow. It was only when I crossed the next bowl west of the pylons that my vario began beeping again. From thereon, it was slow progress to Truleigh, not getting much more than 80 feet above the ridge. 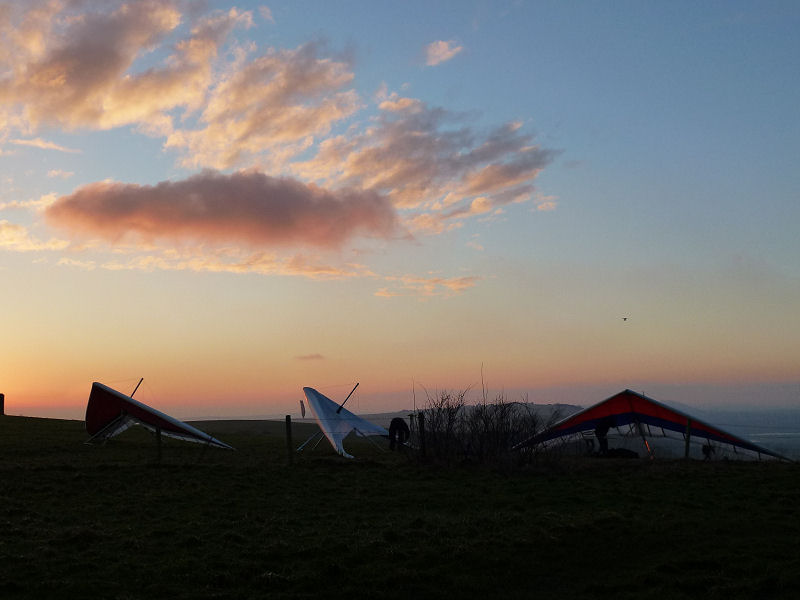 The entire time I was scanning fields at the bottom for a safe bail out, but I soon reached Truleigh and was rewarded with some reliable lift. I managed to work my way up to 300+ feet above the ridge. I estimated that the clouds were another 50-100 feet above me. From here I could see the water logged fields following the path of the river Adur. I thought to myself that it's not going to take much more before we're flooded again!

After throwing the U2 around to gain more of a feel from it, I headed back along the ridge. This time I cranked the VG fully on. The glider became very stiff and pitch pressure became noticeably lighter. As I arrived back at that Dyke, with plenty of traffic to contend with, I released the VG. It wasn't long before I decided the Truleigh ridge was more preferable, so off I went for a second time, then a third time and then a fourth! On my fourth trip down to Truleigh I was aware Ron was following me on his Sting 3. I wondered if he'd follow, but he decided not to (red ribbon). On my final arrival at Truleigh there was another hang glider there (a Rio). As I arrived, he set off back along the ridge. He was maybe two bowls along when I decided to follow and see how fast I could fly the U2. I pulled the VG three quarters on (just enough for the roll stiffness to be comfortable) then set off back along the ridge. I pulled the bar down to my waist and the glider noticeable accelerated and tracked perfectly straight. I wasn't that much above the ridge so the ground proximity gave me a real sense of speed! I was flying faster than a car travelling eastwards along the bottom road and I soon caught and passed under the Rio approximately 100 feet lower. I continued to blast along the ridge, crossing the Pylons for the final time then arriving back the Dyke.

I was still nervous about my top landings so decided to play safe and land in the large field at the back. Below I could see Luke and James, both landed there so decided to join them. My hands were numb with cold, so now was the time to get down. My nerves were ill-founded and I gently touched down just behind James' Sport 2. What an amazing feeling, 1 hour 40 minutes on my U2!

Safely landed, I watched as Luke clipped James onto his rigid wing and James took to the sky. I commented to Luke that he probably wouldn't see that again as James headed off to Truleigh, then offered Luke a flight on my U2. Luke jumped at the chance and clipped in. The condition was he had to land it in the Paddock, of course he gladly accepted before taking to the skies. I watched with awe as Luke threw it around with such wonderful grace before landing it the Paddock as agreed.

For a moment I thought others may think that my flying had significantly improved, but my glory was short lived when Luke perfectly landed it in the Paddock, un-clipped in front of all those watching confirming that it wasn't me flying!