Due to the recent Aerotow amendments (see article: Amendments To Aerotow Operations In The UK); I had to convert my glider to use a 50:50 bridle setup to be compliant with them. With the Aerotow season already starting I decided to visit Stewart at FlyLight to purchase the necessary equipment, fit it to my glider, and to try it all with some aerotowing.

With holiday booked from work I set off for Northampton. The M1 was diabolical; the result of a lorry fire, so after venturing on an epic cross country route, I arrived at Sywell Aerodrome for 4pm. This gave me enough time to watch an air displaying being rehearsed, to rig my glider and to meet some of Stewart's CP students, both of which were very enthusiastic about flying hang gliders!

After Stewart's arrival, an aerotow kit was fitted to my glider ready for my first aerotows using this configuration on the Sting 3. This is a very much improved 50:50 bridle to that that I'd seen before. Gone is the bike brake release which was now replaced with a simple loop that wraps around the pilots wrist. This would make it very easy to operate the release. As a back-up, a barrel release is used on the bottom end of the towing threader. 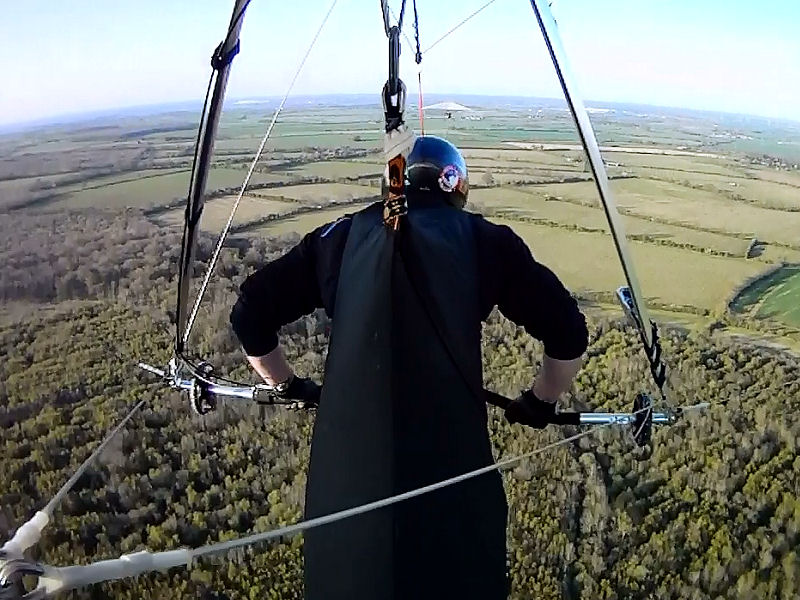 Aerotowing at Sywell, Northampton
Following the tug piloted by Cathy at Sywell Aerodrome.
2 May 2013

One of the things to experiment with was the upper tow point location on the keel. Airborne had advised me to locate it as far forward on the keel without having to open the under surface zip. On my glider, this wasn't much further than 1 inch forward of the king post; this would be something to look at if I again experienced high bar pressures.

After being 'launch marshal' to Stewart and his students, I resumed kiting out my glider and carefully examining and testing the new release system. After Stewart had completed two tandem flights; it was my time to get into the air!

The time was now well past 7pm and the sun was very low in the sky. With the aerotow kit fitted and all checks completed, I was ready to fly. It was nice to see Cathy again; she would once again be towing me into the air. After asking for a tow to 3k she was off to get the tug ready to fly.

After final checks with Stewart everything was set.

I began tearing down the runway and heard a strange noise coming from the rear of the glider. Just as I was about to release and abort the launch it stopped. I later learned that my pod zip cord was trailing behind my glider and caught under one of the trolley wheels, but it became free as soon as the glider went light. 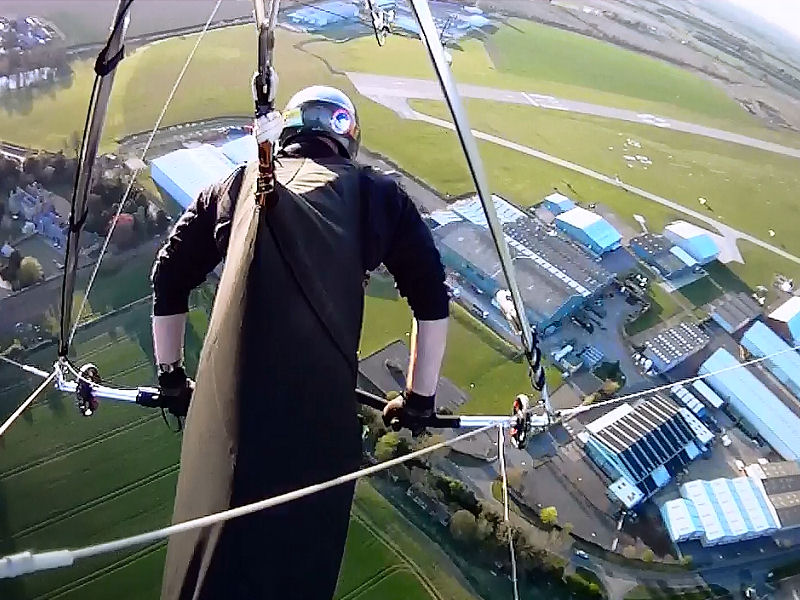 Unlike my earlier tows at FlyLight on the Sting, I didn't pop out of the trolley as abruptly as I had before. This may be down to me being more experienced at aerotowing, or that the 50:50 bridle was assisting in keeping me behind the tug.

I was flying with no VG on at all and still experiencing high bar pressures. Apart from the effort of maintaining vertical position behind the tug, horizontal position was easy. In fact, the vertical position, although required effort, was much easier than all of my previous aerotows on the Sting where I had a tendency to fly too high behind the tug.

When Cathy waved me off at 3000 feet, my arms were pleased to have break. I don't think they'd have lasted much longer. As I turned away from the tug I began on a long glide back to the airfield.

As I flew over the firing range below, I heard the crack of gun fire and prayed that no one would be tempted at taking a few pot shots at me! It was at that point my vario beeped. It was almost 8pm and I'd found a little thermal. Trying my luck I began orbiting. It was weak, but I was definitely flying in some slowly rising air. After 5 360's I'd gained 100 feet before I lost it. It was now time to glide back to the airfield.

Unlike my normal flying, I was directly over an active aerodrome so I had to keep an eye open for traffic inbound and outbound. I didn't see anything inbound, but below I could see a small plane taxiing out to the runway. I had no means of making my inbound presence known other than getting into a position where they could see me. So, stuffing the bar I began a slow (by powered aircraft standards) right hand circuit towards runway 03 right. Fortunately the aircraft on the taxiway spotted me and waited for me to land.

Stewart greeted me and told me that both of his CP students had called it a day and that there was just enough time for me to get one more flight in. Mindful of the bar pressures I had again experienced, I wanted to move the top tow point forward. So after a quick re-jig, which did include opening the under surface zip by 2 inches, I had re-set the top tow point into a new position and was ready to launch again. 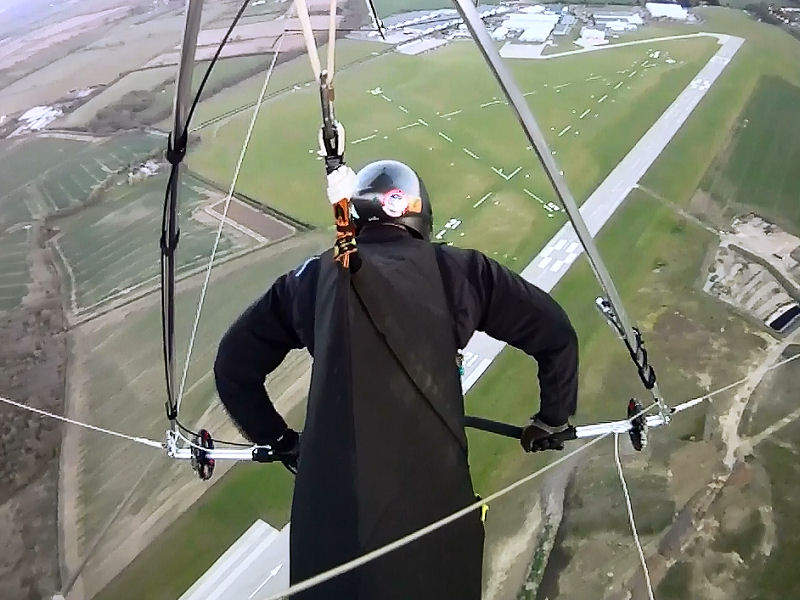 Aerotowing at Sywell, Northampton
Sywell Aerodrome from 1000 feet; gliding back to the airfield after being towed to 1500 feet.
2 May 2013

It was now 20:15 and the sun had just set. Cathy said she's happily tow me to 3000 feet again, but would wave at 1500 feet and give me the option to ping off if I wanted to. So, with the glider ready, the launch proceedings commenced and I was off.

The bar pressure was improved and I was towed to 1500 feet with relative ease. I normally fly with sunglasses on, purely to protect my eyes from the odd insect that may be up there, however, with the diminishing light, it made spotting Cathy's wave difficult. I decided to come off the tow at 1500 feet knowing that I'd be landing under a darkening sky, so wanted to maximise light time for the landing and most importantly, packing all this new kit and glider away!

The final glide back was very smooth and I enjoyed throwing the glider around at the end of the runway to burn off height. Stewart had packed up all the ground equipment and was heading back to the hanger when I landed.

With a short walk back to a suitable de-rigging area I felt a sense of accomplishment knowing that I could now return to the Southern Aerotow Group and return to aerotowing being both in compliance with the new amendments, and more importantly, safer with it.

Again, a big thank you to Stewart and Cathy for taking the time out to accommodate me, I'm sure I'll be returning there again!