This was going to be an entry in the trips page, but due to the significant poor weather, it wasn't worthy of a trip mention (just my humble diary).

Clive and Ozzie are pilots of the Southern Hang Gliding Club who organised a flying weekend for other pilots of the club; here's a summary of the day that I flew...

Awaking in my tent at Fforest Field campsite on Sunday morning revealed that yesterday's weather front had now passed over, leaving a lull. My glider, still loaded on my car was showing the signs of yesterdays drenching, so I unzipped its bag to let it air a little. Meanwhile the rest of the group were debating whether today would even be flyable. The campsite owner then appeared with various weather printouts from some familiar websites, all telling the same story; no wind! 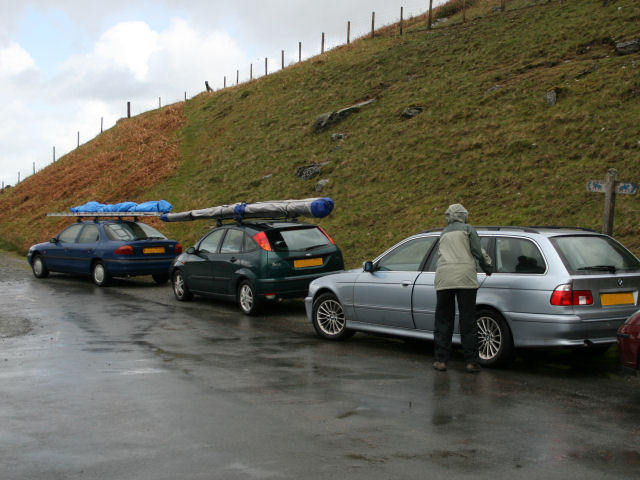 Glider Drenching
A trip to Wales with Clive and Ozzie on tour (Southern Hang Gliding Club members). The weather didn't really play ball all weekend, so we drove around looking at flying sites in the rain but didn't really get any proper flying in!
20 May 2007

After fried breakfast from the local public house we decide to head for the Long Mynd as there was a hint of a westerly breeze developing. This was great as I'd never been to the Mynd before but had heard and seen plenty about it!

As expected the Long Mynd looked fantastic and I could appreciate why it's credited as being the premier westerly site in the UK. Unfortunately, the westerly breeze was almost non existent and that any flight was going to be a simple top to bottom. I had driven all the way up here from Sussex, so I was determined to get at least one flight in, even a sled ride down!

Everyone unpacked their gliders and rigged them in the hang gliding takeoff field. This was a good time to get the gliders dried and aired. We watched a few paragliders inflating, ground handling and a couple doing top to bottoms, but it wasn't looking promising. Eventually I was ready and found myself being the wind dummy (first off). I spent considerable time standing at the front with the glider on my shoulders waiting for a hint of a breeze. Occasionally, the only breeze I felt was coming from behind me and I thought to myself, 'tail winds are not a good idea'.

Twenty minutes later there was quite a queue developing behind me. All I wanted was a slight breeze on my face and I'd be off, but the insects buzzing around in the shadow of my wing show no sign of this. Another five minutes pass and there is now no wind. I can see some birds flying just below the ridge hinting that here may be a breeze coming and decide now's the time to launch. 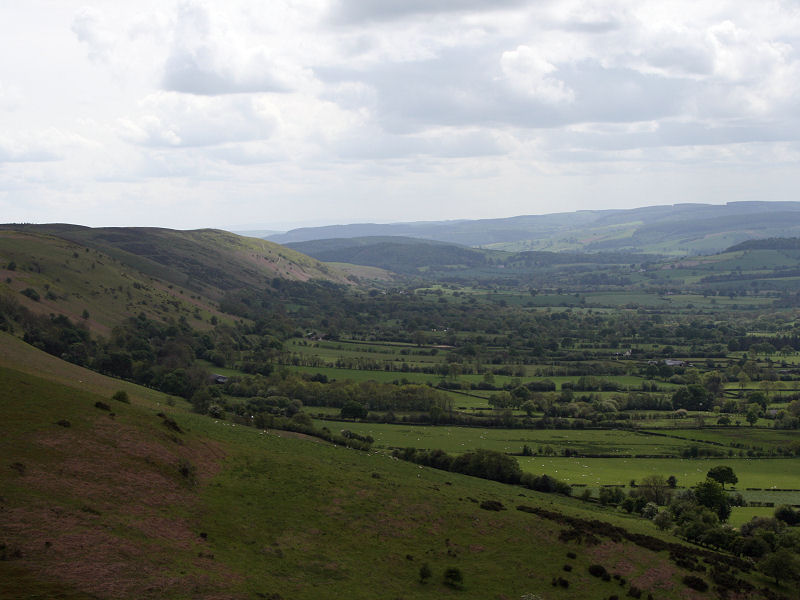 The Long Mynd
Looking southwards towards the Long Mynd ridge.
20 May 2007

I start with a firm run and it takes a while for the glider to start flying. I am now running down the side of the hill, accelerating all of the time. Pulling the uprights towards me further I keep my feet on the ground, increasing airspeed until I'm slowly lifted and the hill drops away. I'm now airborne; I'm flying the Long Mynd!

I was now heading towards the bottom landing field which was some way off (3/4 mile as a crow flies!). I fly the glider at maximum glide (just a little bit faster than trim) to ensure that I will arrive at my intended destination. Slowly my height diminishes and I start to wonder if I'll make the field, but as I pass the trees marking the down-wind boundary of the field I realise I've plenty of height.

Prior to launch I had been briefed by a local pilot about a box landing approach, but I now realise that although I'm high, there is insufficient height for this. I bleed of some height with two S-turns then align myself with the centre of the field and commence my final descent. I switch to the uprights and am astonished that the glider keeps on flying. I pass the centre of the field and I am still going. My toes are skimming the grass and the glider is still full of energy. I start to push out a little, then a little more. That's better; the glider starts to feel a bit mushy. I push out hard and flare the glider and am surprised that I still have to run the final few meters.

After securing my glider and watching Leigh land. Leigh and I realise that the field was not flat, but slightly sloping downhill (that's why my glider retained its energy). We had also noticed a very slight tail-wind which explained why the final approach was so fast and the final flare not sufficient enough to bring the glider to a dead stop!

Looking back to the top of the hill we witness one other launch, narrowly missing a tree and another glider aborting a launch by nosing in part way down the hill. Ouch! It appeared after this, the remaining pilots decide that's the end of flying for today!

So, after more than 10 hours driving around Wales, eating way too much food, drinking too much beer, getting drenched in squally showers and stung by hail, I manage to get a further 3 minutes airtime! It was worth it! I had made some new friends, seen some fantastic scenery and flown the Mynd!