It had been a long time since I was in the tow fields of Suffolk Coastal Floaters, so the opportunity to join them again for a two day competition was compelling. The only issue was the weather forecast, notorious April showers.

Arriving at the airfield at 10am, the wind was blowing perfectly down the runway. Most of the gliders were rigged and the final bits of the winch set-up were being put into place. I quickly unloaded and rigged my glider then attended the competition brief. There was a spot landing competition and an all out XC. No notable NOTAM's but the weather was the one to watch. By 10:30 am, the sky already looked like it was going to over develop.

Due to my late arrival I was last to launch. There had already been some notable problems with the winch ranging from cable snaps, and tangles, all of which caused a slow progression through the pilots and by the time of my first launch, I became victim of another cable snap. Fortunately it was just after my first release and I had just enough height to turn around and land close to launch. 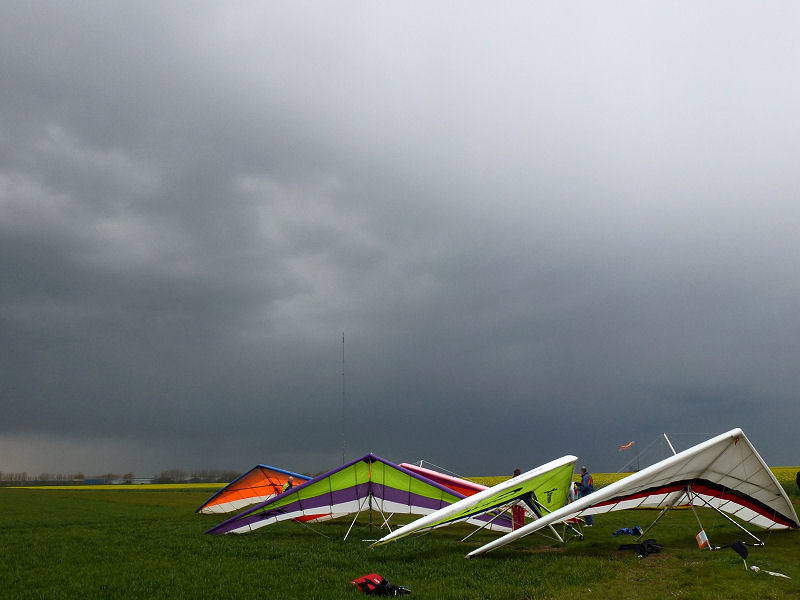 After the cable was repaired, I was able to jump the queue for another launch attempt. This time, despite a very strong launch propelling me skyward a little quicker than I had anticipated, I was successful with a full tow. After releasing and a brief tour of the sky I was back on the ground without even a wisp of lift on the way down.

Andy H and Tim then managed to get away, Andy making almost as far as the coast, before my next turn came around. The sky looked very grey so I opted to sit that launch out, relinquishing my launch position to the next pilot. Moments later the quad bike returned with Keith commenting that is was "Pi**ing it down at the other end of the runway". Almost as the words rolled of his tongue, the heavens opened. Some people managed to get their gliders to the hanger, but mine remained outside for the duration.

When the rain had stopped, I found a sponge in my car and started wiping my glider down. This turned out to be a great opportunity to give the sail a clean and I was able to remove mud and various amounts of sheep sh*t that had found their way on to it. A short while later I was clipped into my glider and back in the air. Like my earlier flights, I mostly found sink and decided to go for the illusive spot landing. I missed it again, but was closer than I had been.

As I waited for my turn to come around again, the heavens once again opened up and the ritual of stowing gliders in the hanger and running for shelter repeated. This time, the rain was more prolonged and the hanger became a focal point to pilots and friends. Mike kindly prepared hot drinks for everyone and the club took the opportunity to hold their AGM. 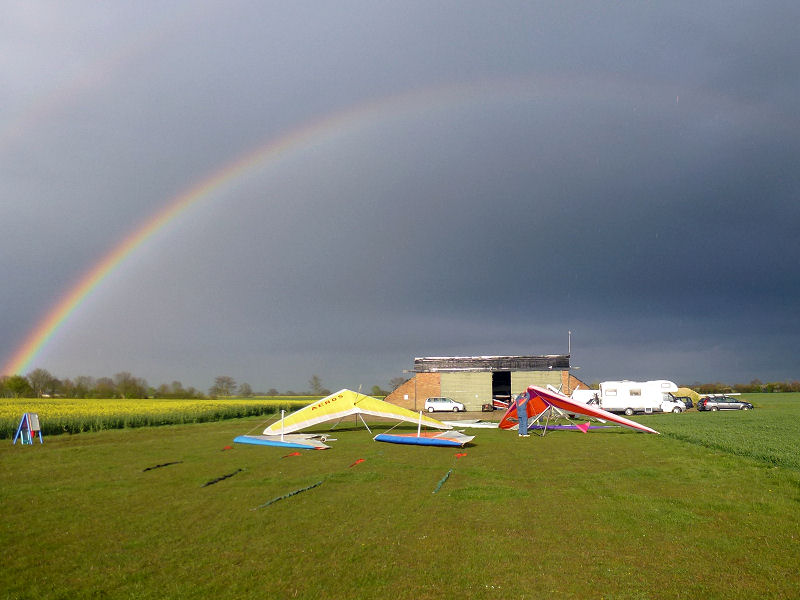 Rainbow at Mendlesham
As the recent shower passes a rainbow is brightens the sky. The four towlines are positioned on the floor, it's now just
21 Apr 2012

Finally the rain ceased and it was decided to run a one off spot landing to conclude the competing for the day. The wind was now non-existent and the now drenched windsocks looked to be hanging their heads with disappointment. As the sun broke through we were rewarded with a stunning double rainbow arching over the Mendlesham hanger. The spot landing competition commenced. 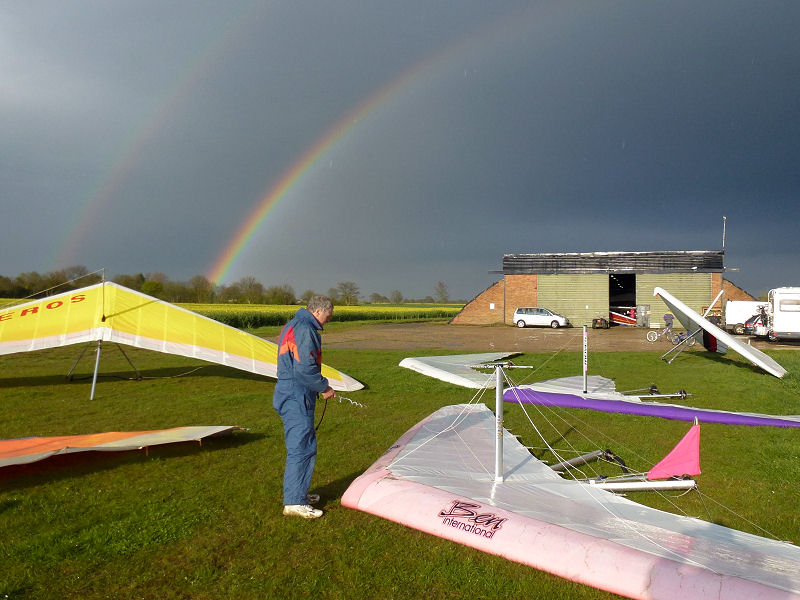 Double Rainbow
As the gliders drip dry, a double rainbow forms of the Mendlesham hanger.
21 Apr 2012

I was one of the first to launch. This, my final tow of the day, was my most pleasurable. After a lovely smooth climb to 750 feet, I released and sped back to the spot (flying fast always puts a smile on my face). I didn't quite get the spot, but landed only metres short of it, briefly putting me in the lead, that was until Keith M landed on the spot perfectly.

With a damp glider, the prospects of a damp cold night under canvas and a job interview to prepare for on Monday, I opted to return home. Mike once again worked his culinary magic with a hog roast and after helping to clear up, I returned home. The final bonus of the day, the Dartford crossing is free after 10pm!