Well I finally found a couple of days when the weather presented a window for me to do my hang glider winch endorsement. August had so far been a complete contrast to the weather we'd had in July. The venue was Lejair's training site in Norfolk, a new part of the country for me.

With two days booked off from work, I headed up on the Monday afternoon and arrived early evening. Rona and Tony were exceptionally welcoming and offered me the opportunity to start my endorsement there and then. A short while later, my glider was off the car, rigged and positioned at the end of the winch cable. My harness now had a chest release system fitted and a two-way radio. 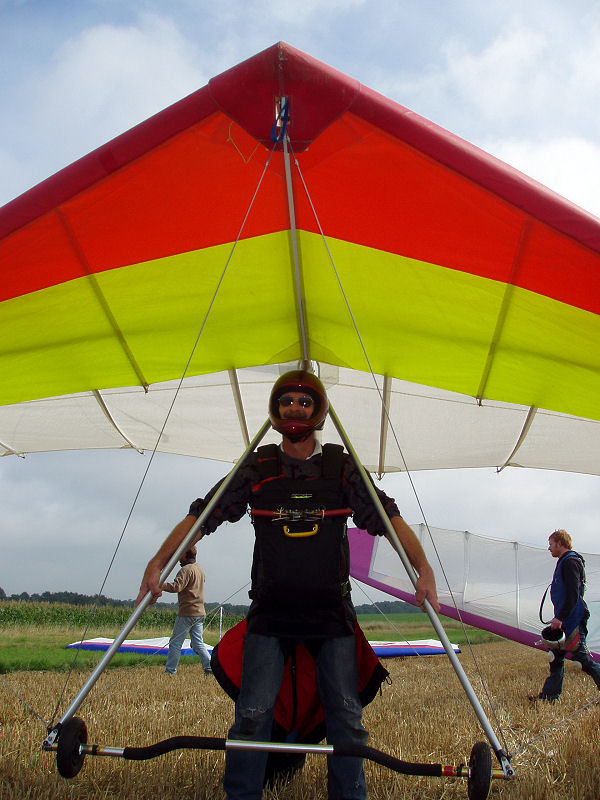 Tow Endorsement
A hang glider pilot moves his Airwave Calypso in preparation for his winch launch as part of his tow endorsement at Lejair.
21 Aug 2006

My first tow was a gentle pull across the field allowing me to feel what it was all about. I left the ground momentarily, floating no more than 1-2 feet, before slowly returning to the ground. It was certainly an odd feeling when compared to running down hills, watching the ground disappear and becoming airborne. 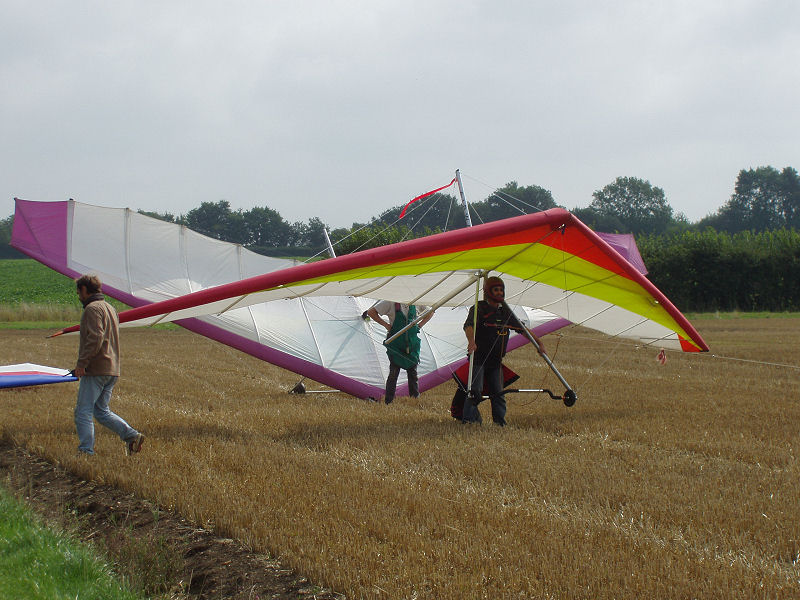 Tow Endorsement
A pilot doing his winch endorsement about to winch launch his hang glider (an Airwave Calypso).
21 Aug 2006

As I was able to accurately control pitch and roll, Tony was happy for my second winch to be a little higher. This time I floated up to 20-30 feet before the winch tension was reduced. Tony's voice came over the radio telling me to land on the wheels, an order which I complied with (I can't remember the last time I did this).

My third and final tow of the day got me to around 100-150 feet with a successful nil wind landing (my previous landing problems now seem to have been resolved). The daylight was now diminishing, so it was time to celebrate with a beer before retreating to my tent.

Tuesday morning arrived with a heavy dew soaking everything. By 7.30am we were prepped and ready for the day's first winches. My first tow was a quick recap from yesterday - just making sure that I hadn't forgotten anything overnight. That was successful and it was now time to try a release.

My next tow was much higher, probably around 200 feet. I was then instructed via the two way radio to release. I pulled the bar in to reduce line tension, looked down for the release mechanism, clicked it and watched the line descend back to earth. The glider was noticeably quieter as I turned it through 180 degrees, glided back towards the launch (for a shorter walk), turned back into wind and landed. 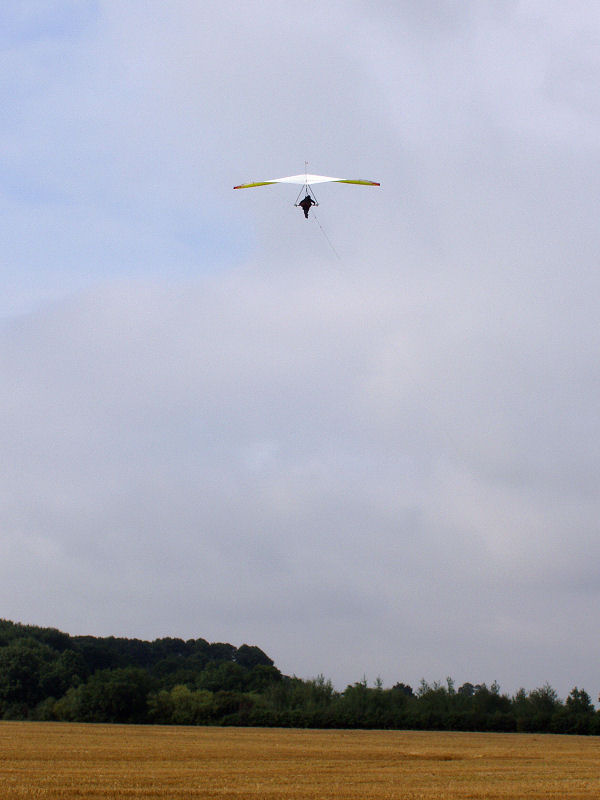 It was now time for the two point tow - this would mean two releases, one halfway up the climb and the next at its summit. Tony made the necessary adjustments, secured the winch and informed me exactly what I was to do. The winch operator would wave a brightly coloured paddle as an indication for each of my releases. 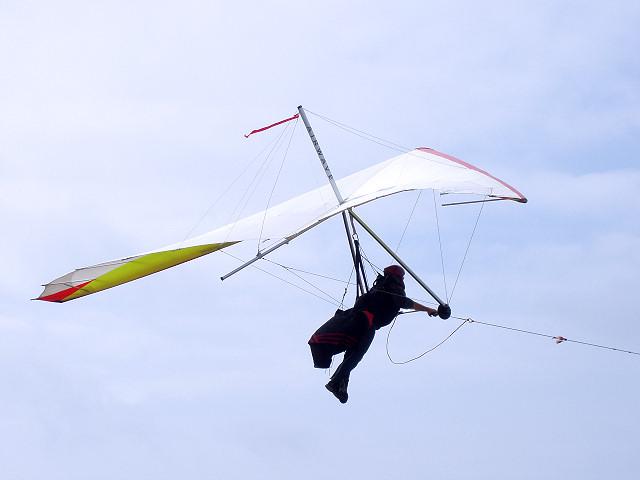 Before launching I looked at the tow release mechanism, memorising the position of each release lever and making a mental note of which one to activate first! With that done I was ready. I called 'All-out' and a few moments later I was pulled forward. A few long strides and the glider lifted, a couple more and I was airborne and going up much faster than I had previously. A short while later the paddle was waved. This was my indication for my first release. Looking down at the winch release system I located the lever, pulled the bar in then released. There was a gentle clunk and bump as the winch tension released from one line and transferred to the next and the climb continued. I slowly eased the bar further and further out and continued upward. I was getting really high now and almost looking down on the winch beneath me, then, there was a sudden bump and deceleration in the glider. I instantly realised that the winch cable had snapped, looking down I released what little of the cable remained. Tony's reassuring voice then came on the radio telling me to release what cable I had left and fly back to the launch spot.

The remaining glide was fantastic, and I had plenty of altitude to play with and a strange sense of freedom, something I seldom get flying the hill soaring sites on the South Downs. I was able to fly all the way downwind back to the takeoff area and land successfully. There wasn't going to be much of a walk back to takeoff this time - I'm sure Tony's other EP and CP trainees were envious of this.

Winch Training with Lejair
This is one of Tony's CP students launching on the winch. You can also see the EP student pushing his stubby back to launch in the background.
21 Aug 2006

My next launch saw me do the second, top release, independent of instruction. This time the line didn't break. As I turned on my glide back to launch, Tony instructed me to practice some 360's - I'd only ever done one before so leapt at the chance and started steering the glider around in a circle. Tony's voice came on the radio informing me that I needed to ease the bar out once the turn started. What a difference that made! After a 360 I was told to play with the glider a bit, so experimented with some larger turns and pitch control. I was now behind the launch point so started setting up my final approach, once again landing perfectly - I really admire the Aeros Target!

Before my next launch Tony gave me some additional advice regarding my landings, the flare was perfect but a bit mechanical. I needed to feel what the glider was doing by slowly easing the bar out before flaring. The advice was greatly appreciated and on my next two flights I put it into practice. I also fitted my vario and was surprised to find out that I'd achieved an altitude of 629 feet on both my tows with a climb of around 10 metres per second (very happy beeps coming from it on its way up). Cool!

That pretty much concluded my winch endorsement. In less than 24 hours I had achieved so much. My landings had improved, I'd executed a number of 360's, played with my glider in a way that I've never been able to do before, and most of all had a fantastic time!

Tony and Rona were simply great and their help and instruction was greatly appreciated. 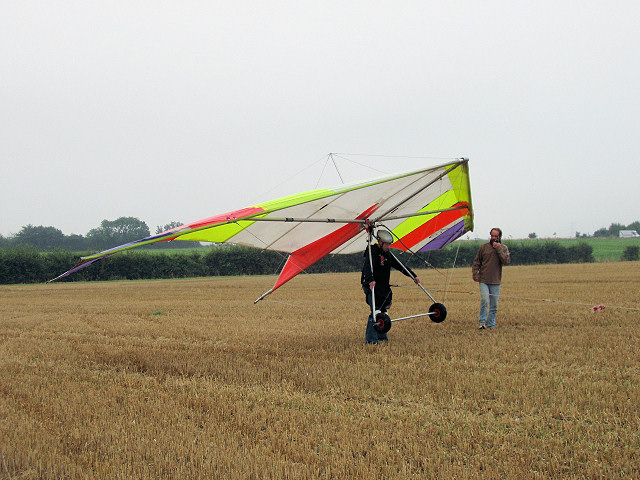 Winch Training with Lejair
This is one of Tony's CP students getting ready to launch at Lejair in Norfolk.
21 Aug 2006 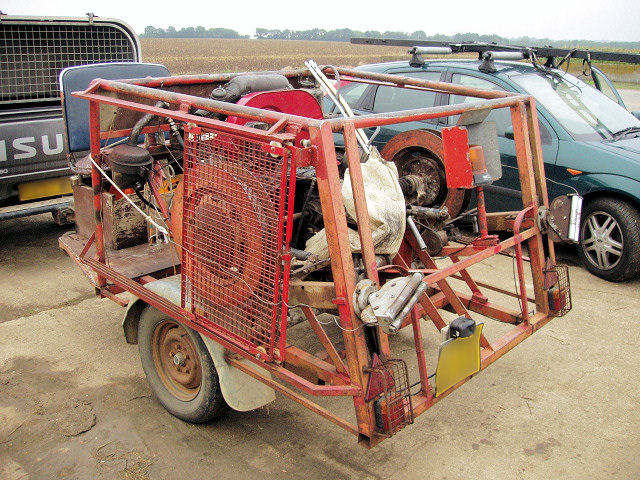 Winch Training with Lejair
Here's the winch that tows the glider up to 600 feet into the air. It's made from an old VW Beetle!
21 Aug 2006 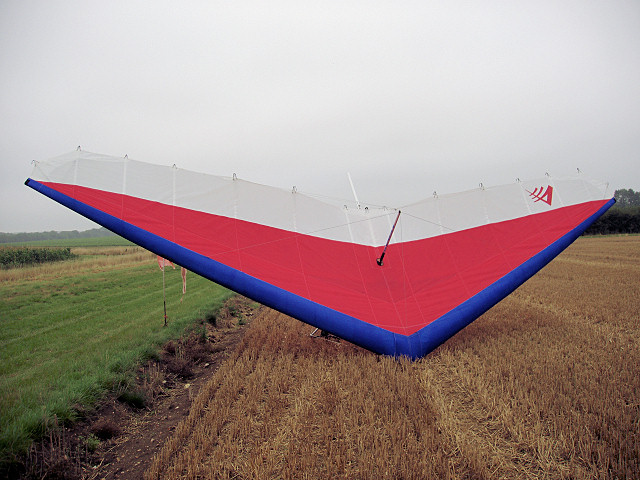 The Aeros Target
While winch training with Lejair in Norfolk, I take a photograph of the top surface of my Aeros Target hang glider as I ready for my first winch flights.
21 Aug 2006 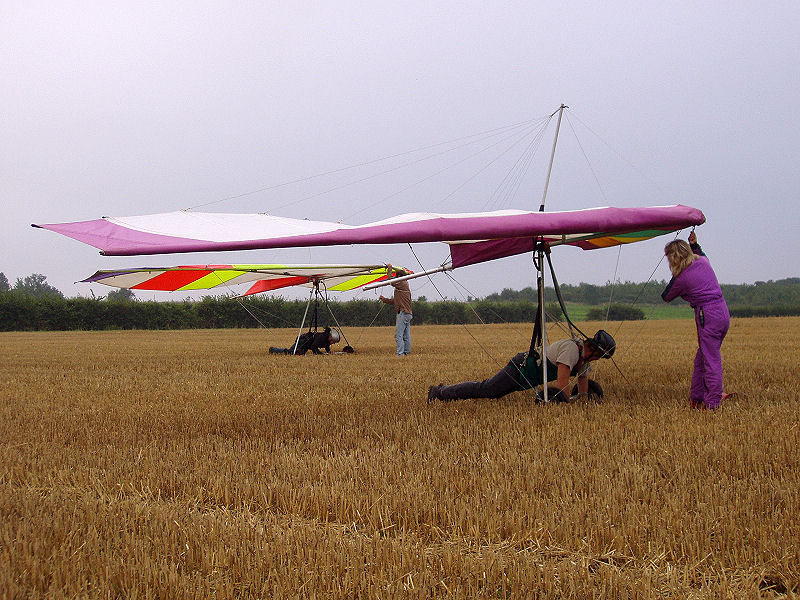 Hang Checks
Pilots getting ready to do their tow endorsement do hang checks in preparation for flying!
21 Aug 2006 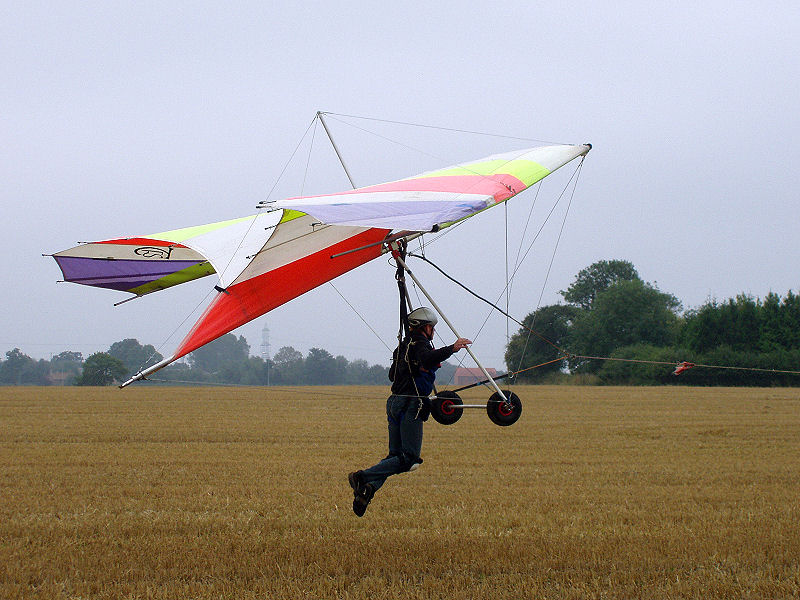 Towing
Steve Meadows (someone I'd later meet up with again when I join the Suffolk Coastal Floaters Hang Gliding Club) - doing his tow training.
21 Aug 2006