I arrived at Firle and as soon as I opened the car door, it was evident that the conditions had exceeded top end. The epic day that everyone had expected was blown out, however, with the winds forecast to drop off later and veer more to the east; everyone waited to see how the day would develop.

This was also going to be my first flight at Firle since the fence had been erected across the top landing field, nicely dissecting it in two with the fence located at the perfect landing spot! It was now more like a Bo Peep top landing field.

In total, 22 hang gliders were present; some rigged and others laid out in the field. Most pilots, myself included, were waiting for the first hang gliders to launch to see how they would get on. The usual daredevils were first off (Luke and Ollie) and on their high performance flex wings, seemed to be doing well (although it appeared a little rough in the take-off area). Despite the wind strength, those flying didn't appear to be able to get that high. Furthermore, the lift seemed to be concentrated in specific areas of the Firle Bowl forcing those flying to linger in them. 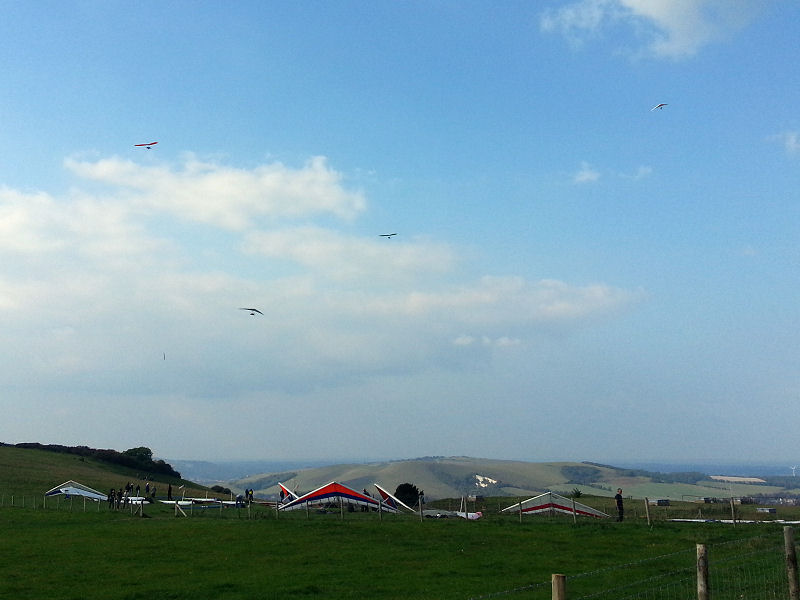 Shortly before 2pm the fresh northerly wind had decreased to an acceptable level for me to launch. Ian P. assisted me to the far west of the bowl where I launched without incident. My first couple of beats back and forth didn't result in any significant climbs and for a moment as I scratched at ridge height, I considered that I might have ended up in the bottom landing field. Eventually however, focusing my efforts on the east facing sides of the bowls (those before mentioned areas of lift), I was able to climb above the ridge, maximising at around 200-300 feet above take-off. The air was rough; small punchy thermals that had been ripped apart by the wind occasionally tossed my glider around and occasionally pointed my noise downwards forcing me into a dive. Occasionally I was able to complete a single 360, but due to the wind strength, I found myself over the top landing field. With minimal height, this meant I had to leave the lift and penetrate upwind to get back to the ridge.

After 15 minutes the conditions became scratchy. Those in the air descended to a small part of the ridge and desperately fought for any available lift. Two succumbed and headed to the bottom landing field but I was able to hang on just long enough for the next lift cycle. It arrived with a slight misting and cooling of the air (something that I had never witnessed before). This left most of the hang gliders either in the bottom landing or top landed. For a brief period of time three of us remained in the air and with this freedom, I was able to work the lift more reliably albeit, not getting significantly high. That was the queue for those patiently waiting to take-off to launch!

A while later with the sky once again getting congested, I recognised the possible start of a new sink cycle so decided to land. Mentally, I managed to get myself in a bad place, mostly due the anxiety I have now developed with windy top landings since my accident earlier in the year. Fortunately, I recognised this and by mentally rehearsing my landing, was able to calm myself while still established in the ridge lift.

My chosen landing approach started at the east side of the bowl where I crabbed across the reservoir, keeping in front of the track and the newly erected fence crossing the landing field. I had decided this was the best approach as the hill rises slightly when heading in a westerly direction. There is also more room with a slightly flatter landing area. My preparation paid off and I gently touched down; and without the harness digging into my crotch (the recent leg loop adjustment appeared to do the trick!).

Although the conditions were still flyable and with it likely to get better later, my head certainly wasn't in the right place, so I decided to conclude they day!