Eventually Arrived at the Dyke

What a day of running around! Watching the forecast carefully I considered it might be a tad bit light at the Devil's Dyke and all the paraglider pilots that had been in hibernation would awaken. So, it looked like I'd be running around after Cara who'd be running in the Brighton half marathon.

After seeing off Cara at the half marathon start I contemplated what to do for the next 2 hours. A quick trip to the Devil's Dyke! I was surprised to see so many hang gliders had come out; and it was great to see a bunch of red ribbons amongst them! The wind was also stronger than I thought and all but one paraglider was flying. The rest were playing a waiting game, I'll go if you go sort of thing.

I couldn't stay for long before I had to return to Brighton to pick up Cara after her 13.1 mile run. So after a chat with the pilots I returned to collect Cara then went home to fetch the glider before returning to the Dyke. 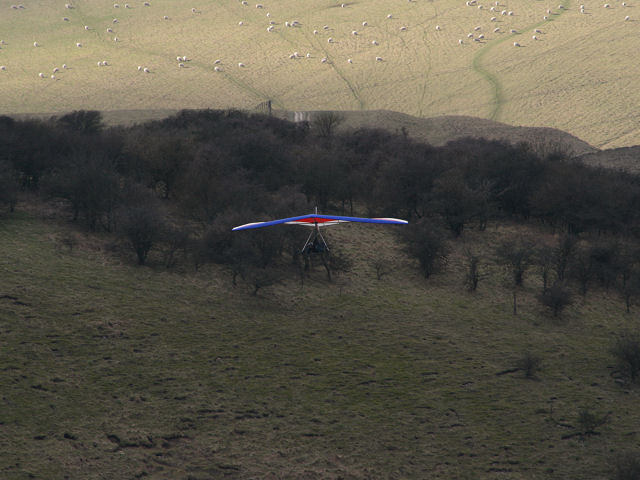 At 14:30 I arrived for the second time at the Devil's Dyke equipped to fly! All the hibernating paragliders were airborne or preparing to. Most of the hang gliders were contemplating the conditions, but I decided, it was getting lighter and lighter so set up my glider as quickly as possible. 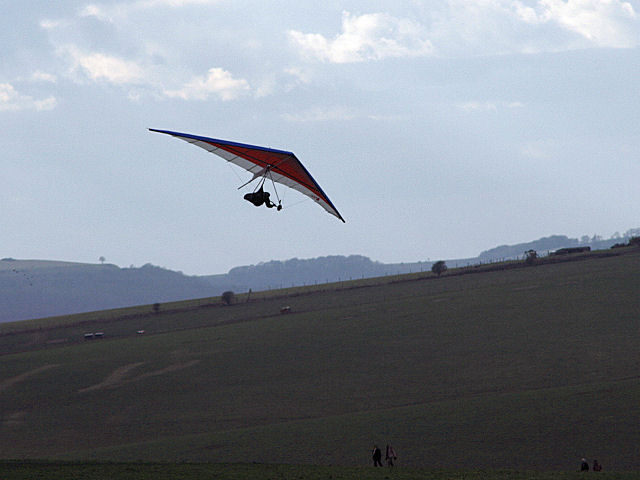 Dan on the Aeros Target
Dan soaring his Aeros Target in the bowl at the Devil's Dyke.
22 Feb 2009

Cara had also joined me, so she assisted me to launch. As soon as I spotted a hole in the paraglider traffic I launched and was able to seek a little bit of lift straight away. The wind was more northerly than forecast so the northern end of the pub hill appeared to work as did the bowl. Getting to the bowl was a bit tricky with all the paragliders but eventually I was able to cross to the Truleigh ridge. A high performance hang glider (100 feet higher), and myself then worked this part of the ridge. I could see a gaggle of birds circling and concluded something must be lifting, but as I made my way towards it the lift switched off. I then made a dash back to the safety of the main bowl slowly getting lower and lower, eventually submitting to the fact that I was destined for another bottom landing. 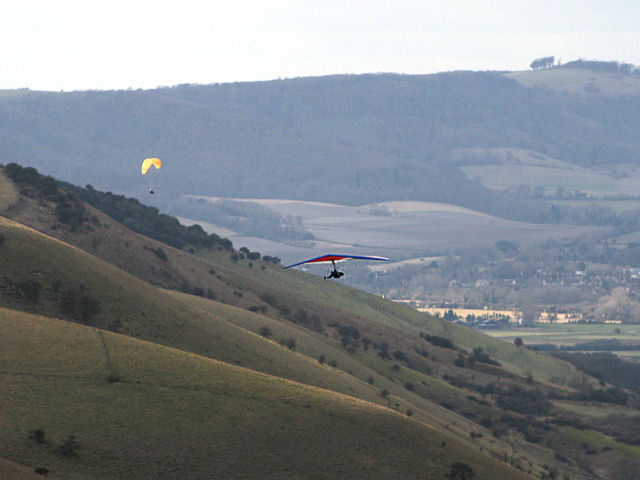 The landing approach, as ever, was interesting as I flew over the trees watching rabbits dashing around beneath me. When I was low enough I set-up and landed with a 2 step landing (there was nil wind). I wasn't the only one arriving in the bottom landing field! Looking towards takeoff I could see all the paragliders slope landing and two more hang gliders slowly sinking towards the bottom landing field. It looked like a sink cycle had begun!