The Woolacombe and Croyde Bay area has always been a favourite family holiday destination and since I discovered Woolacombe was also a hang gliding site, it was a site that I was keen to fly! Despite this, it took several years before I was able to complete that ambition.

It was a family break that once again brought me to Woolacombe but this time, my glider was on the car roof and I was hopeful I would have the chance to fly. Earlier in the year I had joined the North Devon Hang Gliding Club (a requisite of flying Woolacombe) but once again, the conditions were not suitable with a very strong westerly wind. Instead, I enjoyed the beach with family. As the day progressed I was aware that the wind was beginning to drop and my eyes started to look skyward. By mid-afternoon I looked up and was surprised to see a hang glider launch! I was surprised and full of anxiety when I realised that this meant it was on.

I made my excuses to family, left the beach, collected my car and drove up to the Woolacombe launch. Only 5 cars are permitted to traverse the fields to the launch area. A tag system on the gate into the field is used to marshal this. I was car number 3! 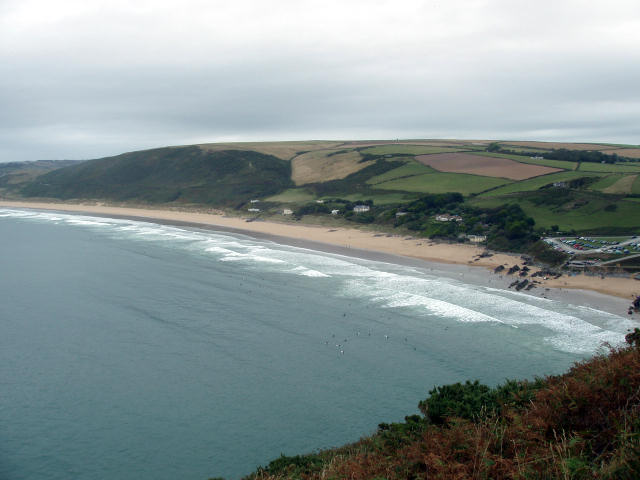 Woolacombe
A view of the Woolacombe launch site as seen from the Tarka Trail whilst walking around Baggy Point.
29 Aug 2009

Equipped with my new Sting 3 hang glider and having only winch launched it to date, I was breaking all the rules about only changing one variable at a time; a new site and my first time to hill launch the new glider! The strength of the wind was also top end, but I was determined to fly.

After rigging I was ready to fly. Cara assisted to the front of the hill where I readied to launch. This was it, an ambition to fly a site was about to be fulfilled. Cara released the nose and I stepped forward. Almost immediately, the glider began to fly and slowly climb but wasn't penetrating forwards. I pulled the bar in and the glider responded by accelerating forwards. My old Target wouldn't have responded quite so positively!

Before I knew it I was climbing, 200, 300 then 600 feet above the top of the hill. The views were stunning! Below I could see the breaking surf on Woolacombe beach, to the South, Croyde Bay and the Ruda holiday park that I used to stay with family when I was younger. Further South I could clearly see Saunton Beach and the RAF airbase at Chivenor. To the North was Woolacombe itself and across to the North East, I could even see Ilfracombe (demarked by what I can best describe as Madonna's breasts!). I could see all this from this one fantastic vantage point!

After an hour I decided it was time to land. I was supposed to be going for fish-n-chips with the family, so there was a particular urgency to getting down and packed up (they don't understand the draw to the sky that free flyers have!). The challenge was performing a top landing at a site I was not familiar with. Fortunately, about 200ft beneath me was another hang glider pilot starting a top landing approach. I decided to follow but being higher, opted to elongate my approach by going back further to bleed off the excess altitude I was carrying. This was a great idea and I landed perfectly, if not a little far back - a good safety margin considering the stone wall at the end of the field making any overshoot options somewhat less desirable!