After Friday's evening's lovely flight at Swanborough, I was keen to come back and get in the air again. I arrived a little earlier than normal, but already, Luke was in the air doing Tandem flights. The wind was strong and had a touch more north in it than it did on Friday.

I was soon rigged and ready to go. For the wind strength, it didn't look particularly buoyant with those in the air not really getting that high. After I launched Don, a veteran pilot from the 70's, I was ready. Scott kindly ground assisted and I was soon in the air. After a few minutes I watched Don top land leaving me to enjoy the air to myself.

Below I could see a rigid glider ready for launch so I moved to the southern end of the bowl to give him plenty of room. As I turned back, I watched the glider launch and fly straight out from the hill. It didn't register as unusual at first as I thought he may have spotted a thermal out front and was gunning for it. However, as I continued to monitor him, it started to become apparent that something was awfully wrong. It wasn't long before he skimmed the bottom landing field with excessive speed, when, suddenly, the control frame dug into the ground, and span the glider violently through 180 degrees where it then disintegrated and came to rest. That was a hard, fast impact! 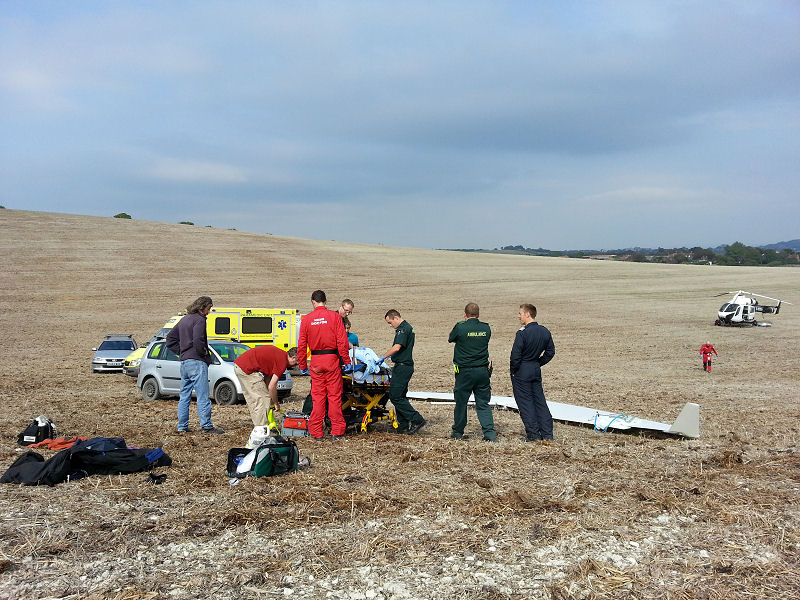 The Crash Site
With the pilot lucid and stabilised, it was off to the Air Ambulance for a short trip to Brighton.
29 Sep 2013

I looked down with horror as the dust settled and revealed a motionless pilot pinned under the wreck of the glider. It suddenly dawned on me that this was serious and there was no-one in the immediate vicinity to get to him. In fact, being the only person in the air, I could probably get to him first! In response I stuffed the bar, waved a frantic hand to signal to those on top of the hill; they all knew from the moment the pilot launched something was wrong! I started an accelerated descent to the bottom landing field headed for the crash site.

It felt like an eternity as I desperately tried to get down as quickly as I could. As I got closer I could see the familiar yellow helmet of the pilot motionless under his glider; I needed to get there quicker! I looked back up the hill to see a car on its way down. Thank god, support was on the way! As I got close to landing, I remember thinking, "don't stuff the landing and contribute to an already serious situation!". Quickly my attention returned to the pilot below and as I touched down, I desperately looked in his direction, hoping for a sign of life!

Safely landed I was still attached to my glider! I frantically unscrewed my carabineer and released myself then ran towards the crashed glider. To my relief, Scott sped across the field in his car and I was assured that support was close to hand. As I arrived, I found the pilot motionless and silent. A horrible fear came across me!

I called to the pilot but there was no response. He was pinned under his glider and I needed to know if he was breathing; the ABC of first aid, Airway, Breathing and Circulation, drummed into me from my many years of life guard training were now put into action. Scott and John had now joined me, so I instructed them to call the emergency services. I carefully slid under the glider and released the pilots' carbineer then myself, John and Scott carefully slid the glider off him to gain better access. To my relief I could hear laboured breathing followed by a moan from the pilot. He was face down in the ploughed field; the chin guard of his helmet was broken, warning me that there could potentially be a spinal injury. Debris from the ground impact was in the pilots mouth and nose and blood could be seen coming from a head wound. From this point forward a clear airway and immobilisation were my priorities.

Over the next 30 minutes the pilot slowly became more conscious and we were joined by the emergency services, which included the Sussex Air Ambulance. Despite the obvious concerns of spinal injuries, the pilot was adamant that his harness and flying suite should not be cut off. Working with the emergency services, I ensured that these expensive items were removed with the pilot's concerns considered.

Once stabilised and secured on a stretcher, the pilot was carried off to the awaiting air ambulance and flown to Brighton Hospital. The rest of us remained behind to collect equipment and to ponder what had happened. As it was getting late I decided not to fly again, so recovered my glider and returned home.

Later informal investigations revealed that an aileron control wire had not been attached. This resulted in a lack of flight control which must have been horrifying when the pilot realised the moment he launched. It's probably best described as the equivalent of driving a car down a steep hill without brakes and steering! As for the pilot, well, he has more lives than a cat, and was very fortunate and only suffered a concussion, bruised spine, cracked knee cap and a partially punctured lung! Lucky!

The Accident
A potentially serious accident observed from my keel camera. This video edit tells of my personal experience from the moment I knew something was wrong to the point when I decided that I had to land and provide first response. The pilot involved has consented to me publishing this video.

Several months on since I wrote this blog, quite a bit has happened. Most importantly, the accident report has filtered through all the relevant channels and was published in the Safety Matters section of the SkyWings magazine; an important reminder to everyone about pre-flight checks! 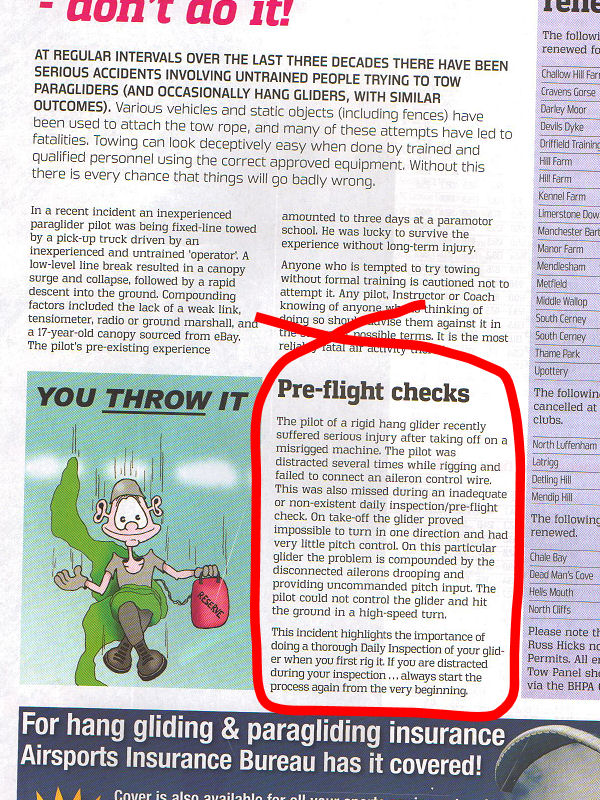 Safety Matters
The February 2014 addition of SkyWings; the accident report makes it into 'Safety Matters' section in the SkyWings magazine!
29 Sep 2013

In addition, the video of the accident that I loaded onto YouTube (with permission from the crashed pilot) has begun to Trend (lots of people have been watching it). I suspect this is mostly likely due to the word "Accident" in the video title (just goes to show what people like viewing on YouTube! This has also caught the interest of several media organisations, one of which is 'Right This Minute'; the very same show that broadcast Luke's hang gliding video earlier in the year. Their edit of my original can be viewed below.