The competition day commenced with a full briefing. The main event was to be cross country but some supplementary tasks were organised. These tasks events were treasure hunt (Mike had hidden something on the ground somewhere and we had to spot it), a landing contest (points to be awarded by a 'judging committee'), and a duration contest (who could stay up the longest). To aide with the smooth running of launching pilots and XC retrieves the 'hot potato' was employed. That is, the landing pilot is passed the 'Hot Potato' and whilst holding it, is responsible for organising XC retrieves and launching. The potato is then passed on to the next landing pilot to ensure everyone has their turn.

Launch order was decided by drawing numbers from a bag. Unfortunately there were more numbers than pilots, but this resolved itself and I picked launch number 10.

The initial conditions were a little benign as weak weather front was slowly passing overhead. Looking eastwards beyond the front we could see lots of little cumulus clouds hinting that conditions would get much better later in the day.

It was soon time for my first launch, after releasing I boated around the sky trying to find some lift. With a few little bumps here and there I was able to maintain for a short period but the inevitable pull of gravity returned me to the landing field where I performed a no step landing. Apparently I dropped a wing in the last moments and my perfect 100% score became an 80%. 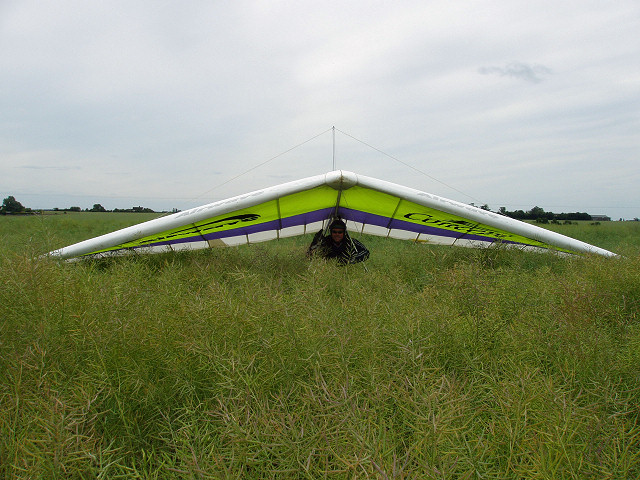 Crop Landing
Paul L demonstrating, for the second time, how to safely land in crop
3 Jul 2010

My second launch was a near repeat of my first, but with the weather front now passed, the sky was now full of potential. It wasn't long before the first few pilots started disappearing downwind. By my third launch I still wasn't having any luck hooking a thermal and slowly there were fewer and fewer of us now remaining. With the wind at almost nil, taking off was now becoming quite challenge and timing was critical. Of course, my sense of timing was off and I launched in the sink cycle as others launched into thermals! Errr!

Whilst assisting Dave R on launch, Dave noticed the 'H' lift and possibly tangle on the tow lines. As I glanced around I noticed a vortex of air moving directly down the runway towards us. Immediately recognising this as a dust devil I radioed 'Stop, Stop', then screamed at everyone to grab a glider. Unfortunately, I was the only person that saw the pending chaos. It was only when gliders started independently flying themselves that people realised the gravity of the situation and started running round trying to control the gliders. I, on the other hand, was trying my best to hold Dave and his glider on the ground. The dust devil passed under his right wing lifting glider, Dave and myself resulting in an inverted glider with Dave on top and me trying my best not to join Dave. It would have been quite comical if it wasn't so serious!

Very fortunately damage was only limited to Paul L's glider; it almost reverse looped! The damage was a few bent battens and scuffing of the batten bungees - it could have been much, much worse!

After that drama passed, normal launching resumed and I completed my fourth and final flight of the day. That flight was a very smooth up followed by a very smooth glide back down again. Not a bump anywhere!

At the end of the day, with all pilots retrieved from their XC's the competition concluded with a BBQ after which my wife and myself retreated to Stoneham Barns campsite.

Personal Video Log
This video captures most of my flights of the day during the club competition. I didn't managed to get away and I didn't really connect with any lift, so these are simple tows up and glides back down again!

Summer Competition
This video captures the fun and games at the Mendlesham Summer Flying Competition at Mendlesham airfield. Laughs had all around any no-one hurt, just one or two bent gliders!