There were very few people at Firle and only John and Chris were rigging their gliders when I arrived. After I launched John, I decided today was the day to try my new Myth 3 harness from Aeros. By the time I had rigged my glider, John had returned and together we moved my glider to the take-off area, checked everything on the new harness and completed a final hang check.

As I ran down the hill the glider lifted above me, much more than I was used to. For a moment I feared that I hadn't attached my leg loops but then I felt a reassuring grip as the leg straps went taught. Stewart Bond had warned me that it would feel weird having being used to a front loaded parachute harness - he was correct and as I continued to accelerate the glider down the hill, I was slowly lifted into the air.

The Myth Debut
My first flight in the Aeros Myth 3 Harness and probably my longest flight to date.

When I cleared the hill I slowly eased the glider around to the right and slipped in to prone position. I was much closer to the base bar and strangely, I found the harness to be very comfortable - even without zipping up. The aluminium frame in the harness was doing what it was intended to and provided support that my previous harness did not.

I had picked the perfect day to fly with my new Myth 3 harness. The air was smooth, but not particularly buoyant, and I had the entire site to myself - consider that, a weekend with perfect flying conditions and hardly anyone had ventured out! I used the time wisely to get used to the new flying position and the feel of flying the glider, which felt somehow different.

Chris T. was somewhere above me on his rigid wing and making full use of the ridge. John Mc. had flown earlier and only stayed in the main bowl. I decided to explore the ridge and pushed eastwards towards Firle Beacon. Crossing the wooded area was the most nerve racking and I convinced myself that I would sink out and have to land in the trees. Of course that thought pattern was ill-founded and I arrived at the Beacon. This part of the ridge worked best and I climbed to 400 feet above take-off.

After over an hour in the air I returned to the main bowl. This Myth was certainly comfortable in flight but I confess to being a little nervous about landing. I decided to fly a bit longer and once again pushed eastwards towards the Beacon. Dan B. had now taken to the air on his Litespeed and the two of us danced around each other at the Beacon. Eventually, I pushed a little bit further east then realised I was looking at Bo Peep and the familiar bottom landing fields. I suddenly realised that I had edged my way around the corner and with a slight westerly component in the wind, was probably not going to make it back!

I turned 180 degrees and pointed the glider back towards Firle. My speed across the ground was nil and I began to sink. Damn it! I pulled the VG full on, tucked my elbows in a pulled the bar back. The glider responded and slowly started penetrating into wind, albeit dropping at the same time. It did the trick and I eased my way back onto the main ridge.

I looked at my watch; I had now been airborne for well over an hour. I had decided it was time to do the thing I was most nervous about, land the glider! 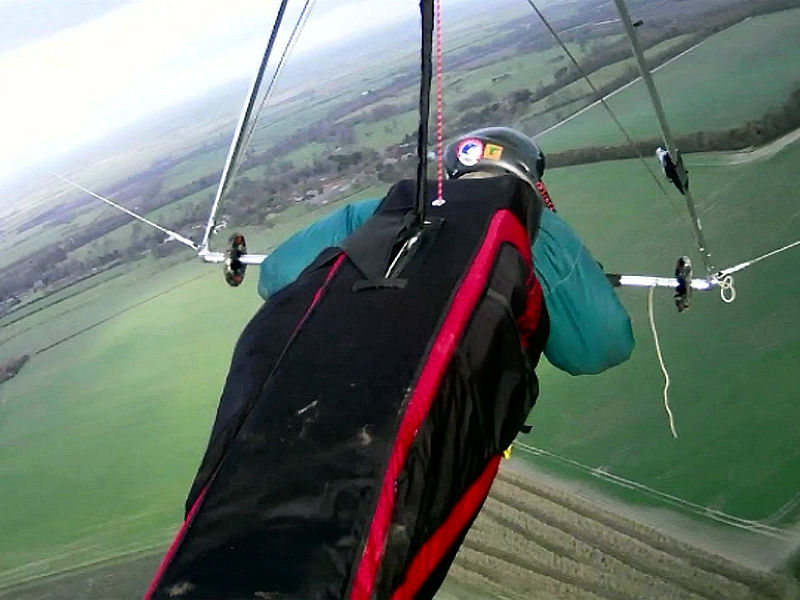 I arrived back at the main bowl too low for a top landing but slowly worked my way to a suitable height. Somehow I forgot to release the VG, I suspect due to the fact that I was preoccupied about landing, so I began my landing approach in this configuration. I was probably not at the ideal height and as I swung around into wind I tried to get up on the uprights. Previously this was achieved by reaching up and swinging into the vertical position, but I struggled getting behind the uprights to do this. In desperation to get into position I overstretched my shoulder, pulling something and popping the nose of the glider. With some additional effort I was into position and my pitch was corrected.

My nuts underwent a painful vice like grip as I lined the glider up for touch down - this would be something I'd need to investigate later (not my nuts?!!). I had landed after a 1 hour 27 minute flight - possibly my longest to date. 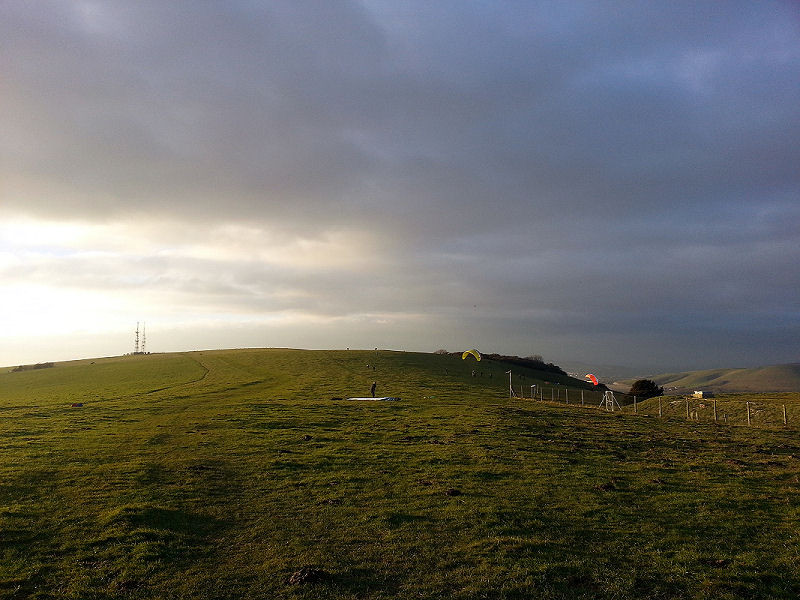 Firle
Looing towards Beddingham, as the day draws to a close a couple of paragliders attempt to fly in the still fresh northerly winds.
30 Nov 2013

As I packed my glider away the sun was low in the sky making for some good photographs. There was a really good mood on the hill and as I zipped my glider back into its bag, some modellers shared stories of their afternoon�s flying with the rest of us. John had some students doing some high level top to bottoms and after watching them, we all headed down to Middle Farm for a hot coffee. 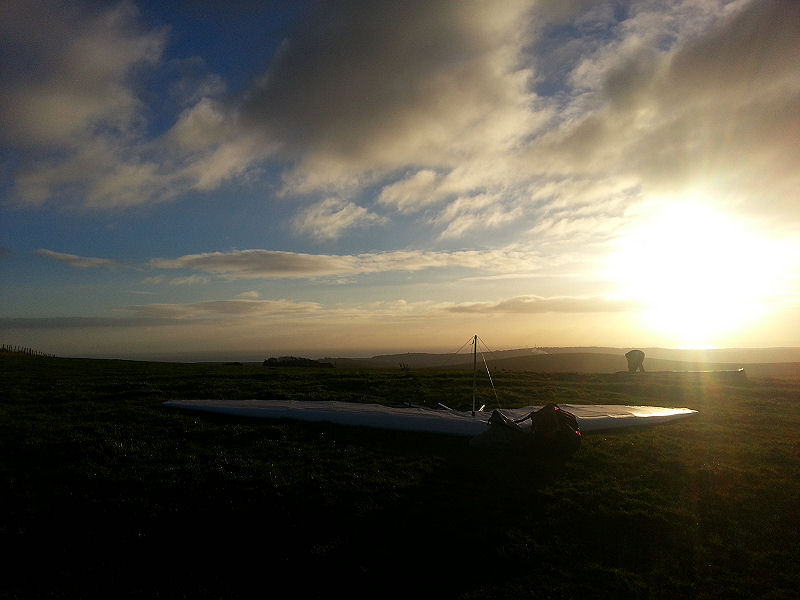 Sun Setting
The sun setting over New Heaven as I start to pack my glider away after a fantastic afternoon of flying.
30 Nov 2013