Wednesday started off as being a possible day for not flying. The wind had shifted to the North and it looked to be blown out (too windy!). John had decided that today might be a chance to look at Loja, a site about 40k away facing north. So, with the hope of flying, we once again loaded the vehicles and headed to Loja. 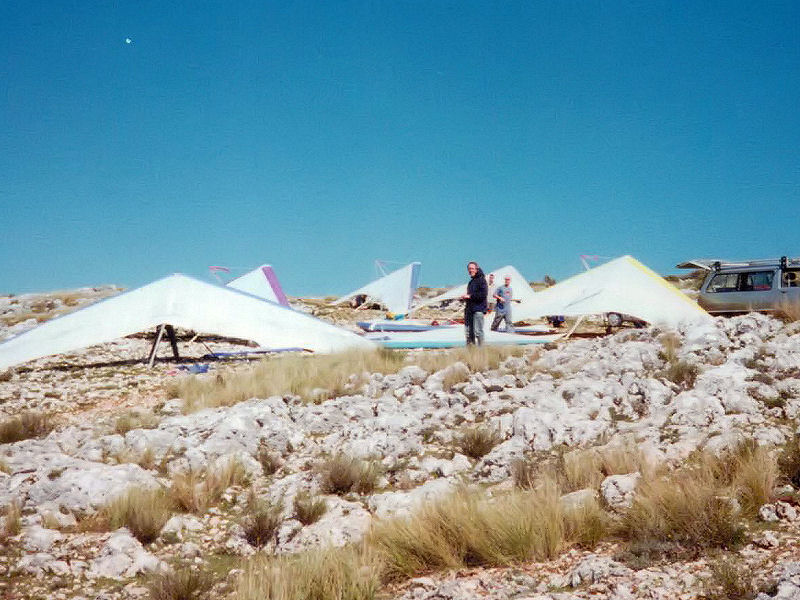 The Loja site was simply impressive. The landing field was about the length of 4 football pitches and the grass was maintained at a descent level courtesy of the local shepherds flock! There'd be no problems running on this stuff! So, with the landing field examined and the wind reducing somewhat, we headed to the take-off that was a staggering 2000 feet higher than the landing field. It was starting to look like we'd be flying! 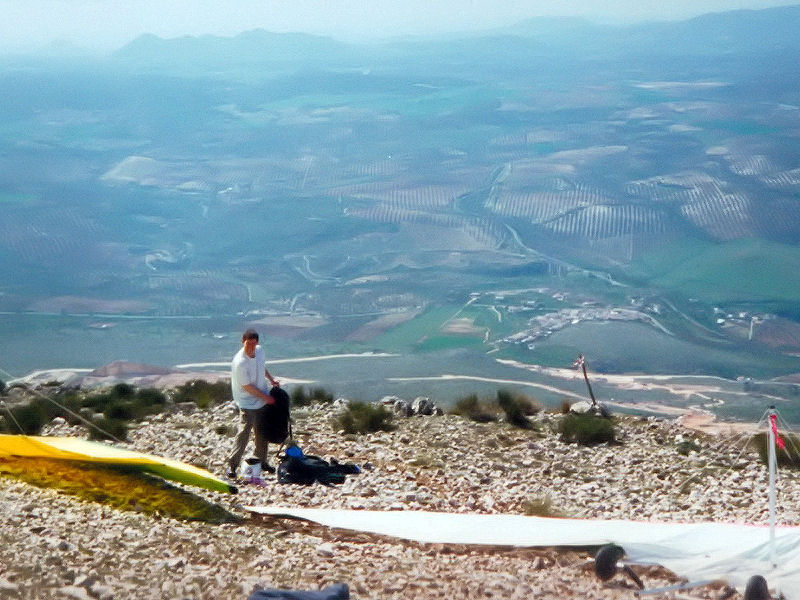 Loja Launch and Bottom Landing
A view from the Loja launch looking way down to the bottom landing field some 2,000 feet below.
4 Apr 2001

The takeoff site gave rise to an impressive view of the valley below and spotting the landing field proved a little more difficult than usual. After a short debate, we all decided that this tiny little field in the far distance, 2000 feet below was in fact the landing field we had inspected earlier. This was where we'd all be landing! 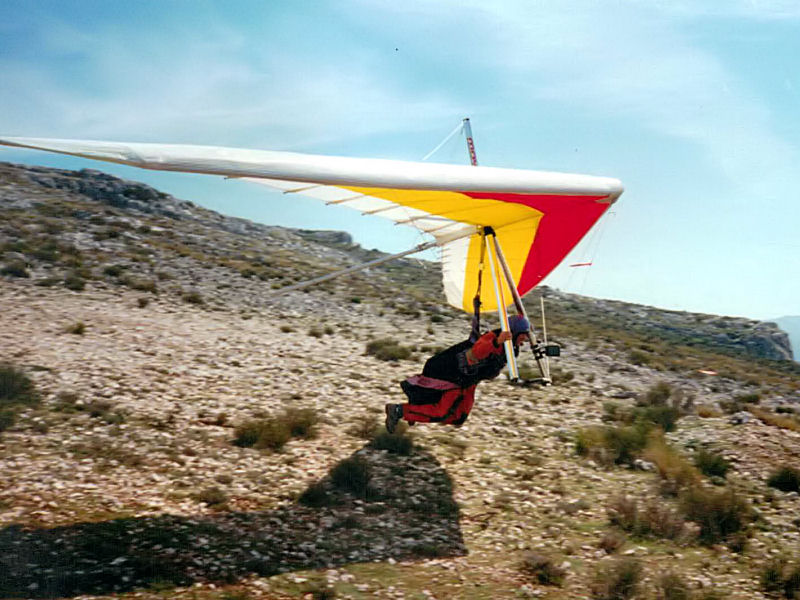 Ozzie Away
Ozzie launches from Loja; off on a little task that John B. has set him!
4 Apr 2001

Matt somehow volunteered to be wind dummy by launching first. After a few turns he was heading slowly downwards. Thinking this was going to be a simple top to bottom flight, no one was rushing to their gliders. However, to everyone's surprise, Matt had scratched his way back to take off height and was maintaining it. Matt's voice then echoed across the various radios tuned to his frequency, "Stop watching me and come JOIN me!". Cheers Matt, that was all the encouragement I needed and I was off. 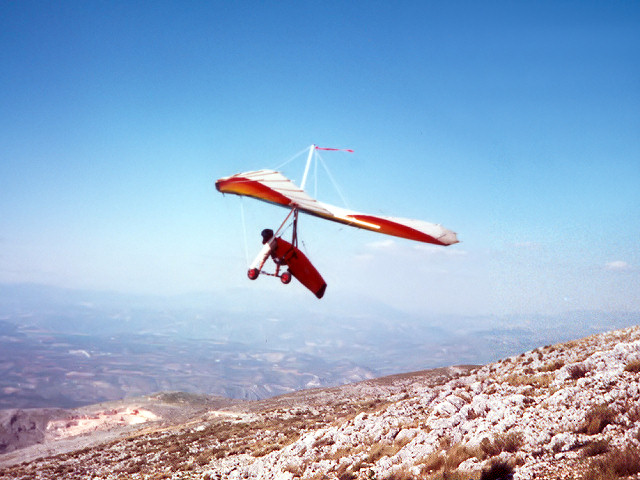 Matt Away
Matt is keen to get up and is one of the first to launch. Initial moments it looked like he was going down, but when he started climbing, everyone else returned to their gliders!
4 Apr 2001

After launching I executed a few turns and a couple of random 360's before my vario squealed one of it's happy, I'm going up sounds. A bit more random turning (as I didn't really know what I was doing) put me on top of the stack (well, there were only 3 of us flying at this point - so I had my moment!), as I looked below observing all the hang gliders beneath me (had to get that in), I decided to spot the takeoff site and after concluding that these microscopic rectangular things beneath me were our cars, I realised that I was high. My vario's altimeter confirmed this by reading well over 1000 feet above take off height, or 3000 feet above the landing field! Not bad for a novice! My Highest flight to date! 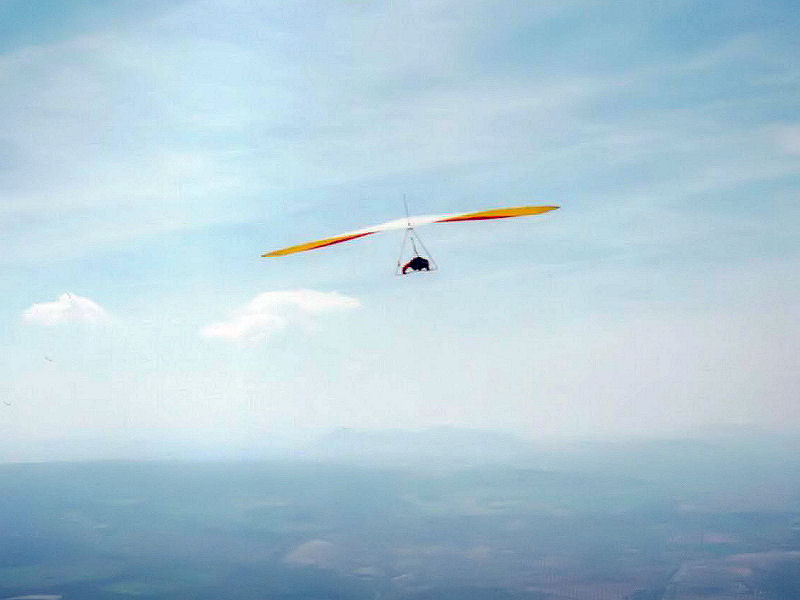 Wednesday ended with everyone having the flight of their life, with Matt probably having the best flight by staying up for almost two hours with a height gain of around 1700 feet! However, his being air sick three times, probably put a bit of a downer on it, but I bet it was worth it! 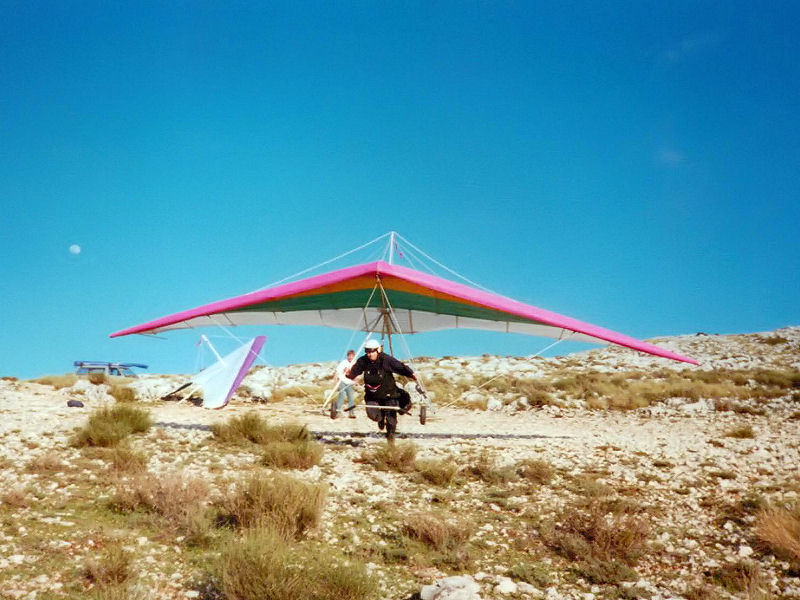 Dan Away
Dan starts his take-off run at Loja flying his Calypso glider for the first time off Loja.
4 Apr 2001 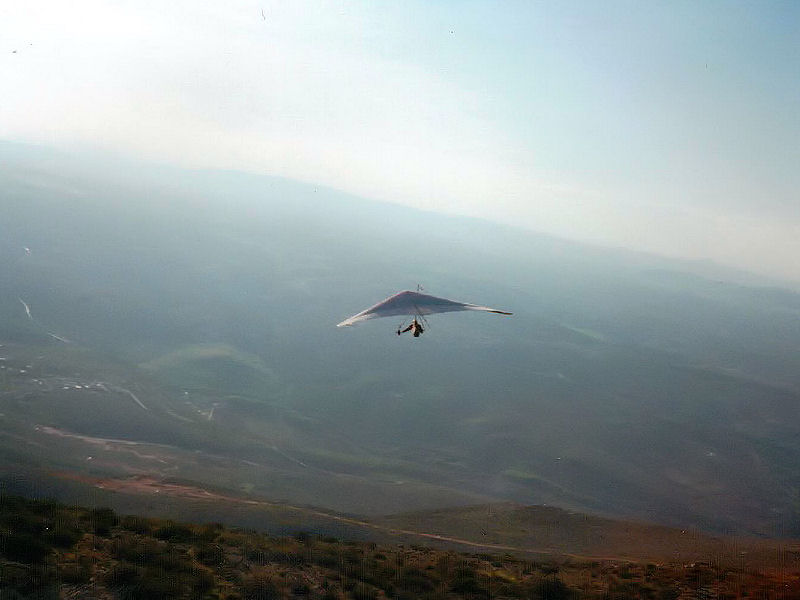 Flying Loja
Dan heads off over the skies of Loja on his Calypso hang glider.
4 Apr 2001