Wet Feet and a Christened Glider

Almost 3 months without flying and my frustrations with regard to not flying my new U2 160 were to be addressed today! I had anticipated that Friday would (well I hoped it would), be flyable so took the unusual steps of booking Friday off work. 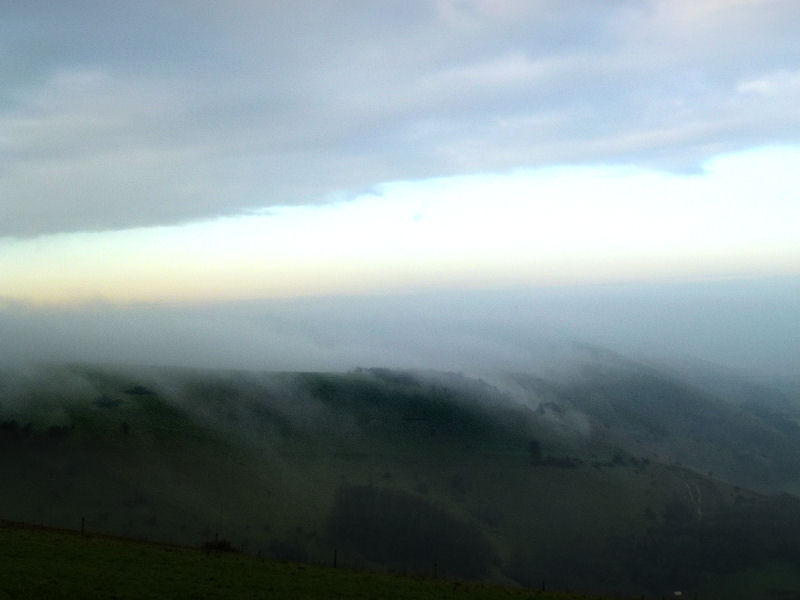 Orographic Clouds Forming
Arriving at the Devils Dyke and the orographic clouds begin to form.
5 Dec 2014

I arrived at the Dyke at 9:30am to discover orographic clouds had covered the top of the hill. Above I glimpsed small windows of blue sky framed by wispy cloud hinting that there was a good chance that it would soon burn off. The wind was a light north westerly and through the mist of cloud, I saw a paraglider laying their wing out on the ground in preparation for flight. I found Dave M. in the car-park and as we chatted, the clouds significantly thickened bringing with it a damp moist eerie feeling not very indicative for flying! Chris, Ian, Luke, James and others then arrived. With the forecast suggesting it would get windier and clearer later, I began to rig my new U2 160 with plenty of help from Luke (very appreciated). 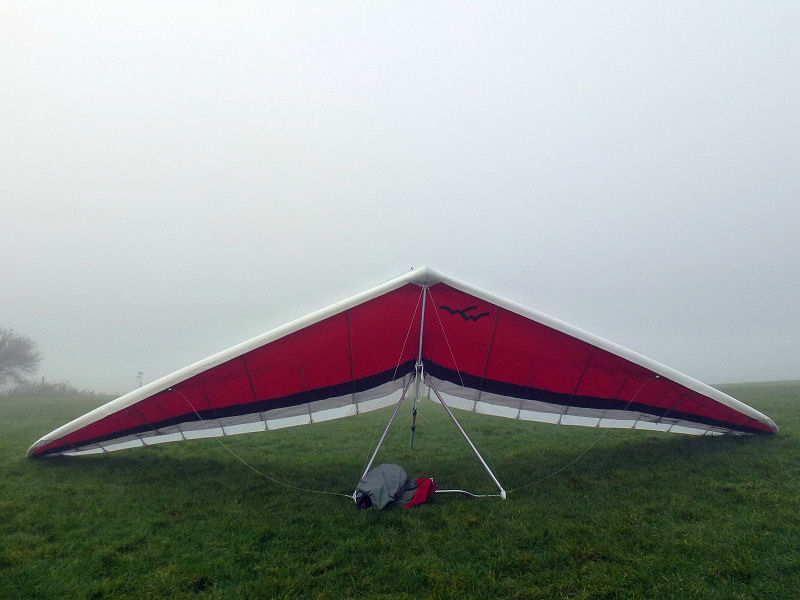 The U2 160
My pride and joy, my new U2 160 rigged and ready for flight - quite a contrast from my first glimpse of it on Facebook during its test flight on a sunny hill in the USA!
5 Dec 2014

By 11:30, the clouds had lifted and hordes of paragliders had now established a flying circuit along the north westerly part of the ridge. It didn't look inviting for hang glider pilots with an impenetrable wall of paragliders occupying all available lift. The wind was bottom end for a hang glider, possible without the traffic, but not worth it with it. I had decided not to fly a new unfamiliar wing in such dense traffic and in such marginal lift. That said; Luke on his rigid wing with help from some paraglider pilots that had cleared a launch window, was able to get airborne. After two beats along the ridge, Luke was established above the paragliders! That's what that extra performance gives you! 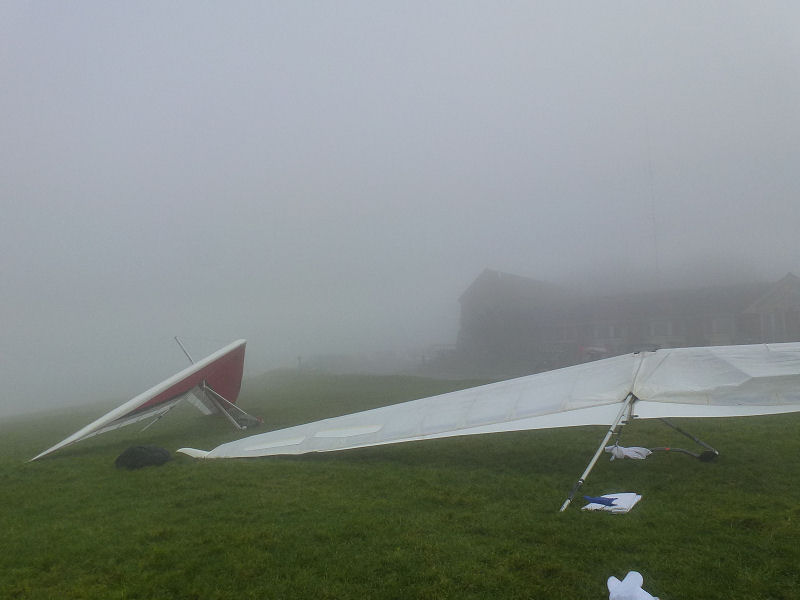 The rest of us decided to retreat to the pub to warm ourselves up with hot coffee. When we emerged almost 45 minutes later, the wind had increased and the thought of actually flying lingered in my mind. By 14:00 with the wind increased, paraglider pilots began to land and it felt good for hang gliding. My only concern was that it might rain as there was definitely something out front. When a weak gust front blew through, I considered there being a high risk of rain futher confirmed by a few spots landing on my face!

John B had now arrived with a student ready for his final soaring flight, Ian P. was now in the air and all of the paraglider pilots had landed. The fear of once again returning home without flying my glider gave me the final encouragement to go for it. Clipped in and hang checked, I made my way towards launch. The U2 felt a little more awkward to ground handle than my Sting, but manageable. After one final check of the airspace, I confirmed Ian P. was clear and began my take-off. After a good solid run, the U2 simply lifted me into the air and I began my first turn to the right. I thought to myself that it didn't really feel much different to the Sting 3. In fact, the transition from the Target 16 to the Sting 3 was more of an event! 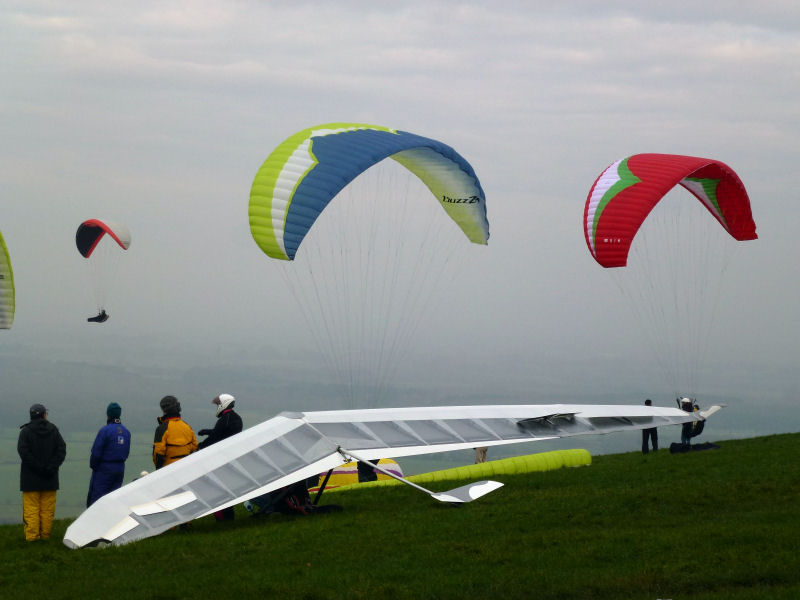 Luke Waits
When the fog lifts the sky becomes crowded with paragliders. Luke patiently awaits a gap before launching into a busy sky!
5 Dec 2014

Only when reversing my turn along the ridge, I decided that the U2 was slightly lighter in roll than the Sting. A couple more turns confirmed this. Unfortunately, this was the point when it began to lightly drizzle. Ian P. made his way to the top landing field and as I looked down towards Truleigh I could see Luke and Chris returning low on their rigid wings. Normally I would have considered top landing as flying in the rain is not to be encouraged, however, looking at the uprights I could see they were already covered in rain droplets so decided the best option was to dry the glider by speeding it around the sky. The light drizzle lasted around 20 minutes and I continued to boat around the north westerly section of the ridge, sometimes pushing across the modellers bowl (there weren't any modellers about). John B's student (Nick) had now launched and was doing exceptionally well. I gave him plenty of space and after watching him complete his first top landing and with the sky appearing to get darker, decided now would be a good time to land to avoid packing up in the rain and darkness.

Not wanting to repeat my Dyke experience from earlier in the year, I opted to land in the large field behind the bowl. I intended to stay as clear of any possible turbulence from the fort (there was still some north in the wind) so ended up going back a little further than normal. As I turned into wind I realised that I was behind the barbed wire fence. For a moment I thought the fence would be my landing spot, but pulling the uprights in accelerated the glider and I cleared the fence and gently touched down. That was it, my first flight on the U2 completed and I was buzzing!

What followed was a prolonged de-rigging of the glider. My first difficulty was the removal of the curved tips (although I've since been assured there is a technique) and the clean folding of the sail at outer leading edge. In drier conditions I would have persevered more, but today my main goal was to keep it as dry as possible and avoid as much mud as I could! After all, it was a shiny new glider that had just been christened!

A big thanks to Luke for not only showing me the best technique for rigging, but for carrying my glider back to my car at the end of the day!