I can’t remember a time where I hadn’t flown for a significant period; be it due to weather or my availability, I wasn’t getting out this year! When I spotted some northerly winds on the forecast, Wednesday looked best so I took the unusual step and booked a last-minute day off work.

I hadn’t flown since Lanzarote and except for thoroughly checking my glider in a restricted space on my return to the UK, crawling around inside and checking the airframe, I hadn’t fully rigged the glider. When I arrived at Firle and after I had checked the conditions on launch, I rigged my glider as a gentle un-forecast drizzle began. As I checked over the glider and did my pre-flight checks, I found an issue. As I pulled the VG cord, the sheath of the cord separated and exposed all the nylon strands contained within. I had also noticed that the operation of the VG had an unusual amount of friction. Something was clearly wrong and probably a result of when I had changed the uprights in Lanzarote.

After I had removed the right knuckle to gain access to the inside of the upright, I could clearly see that the VG cord that runs from the bottom of the upright, to a pulley at the top and back down to the knuckle had twisted around itself several times. That explained the friction. I had also concluded that the sheath of the VG cord had been cut or worn by the VG cleat on the base bar; I had read this in past reviews for Wills Wing gliders and will update my own review with this information. I suspected, but cannot confirm, this was a contributory factor to my VG cord issue. 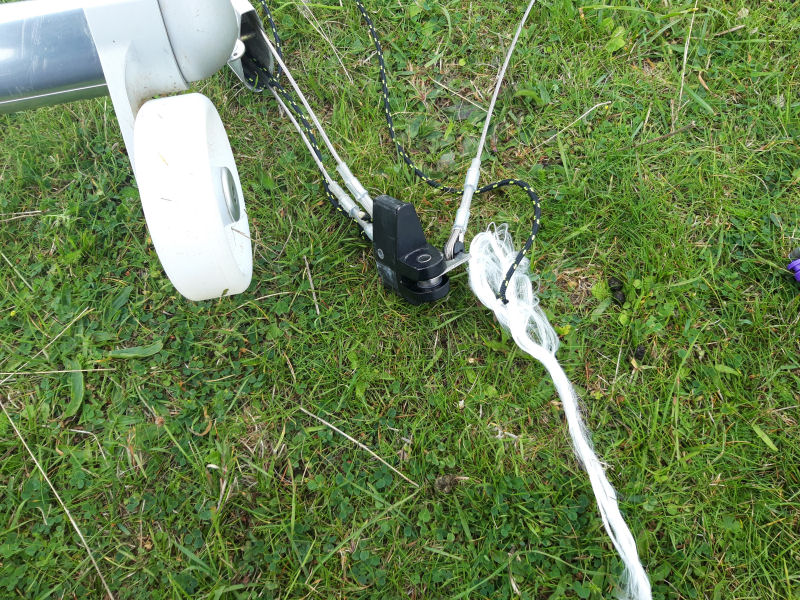 Clearly frustrated by all of this I began to question if I would fly today. I returned to my vehicle and after a rummage around found all the necessary tools and parts to affect a replacement of the VG cord; all but a cigarette lighter that Ian P. loaned me the use of. 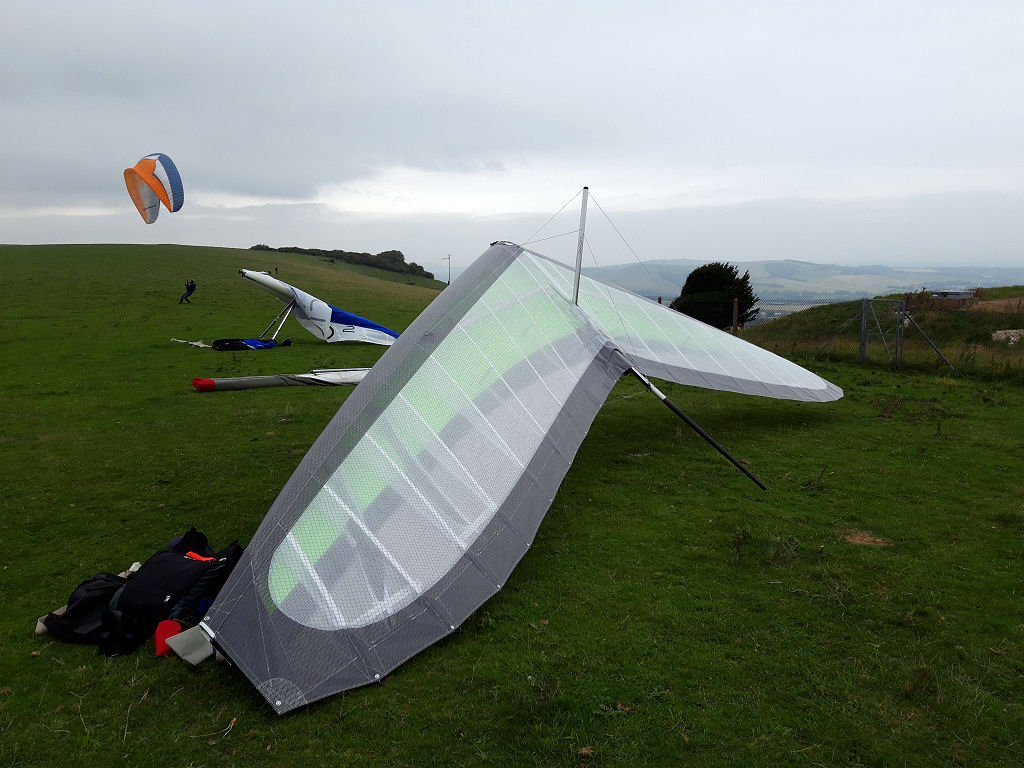 After some fiddling around and the use of a lead weight supplied by one of modellers that had popped over to help, I had dropped a new cord through the upright and reassembled everything ready for a flight. By now others had flown in the scratchy conditions and some paragliders had launched. John Barratt had arrived with some students so as they readied their gliders, I clipped in, moved to launch and took to the air. A few moments after, Rod took off, flying a school Falcon. 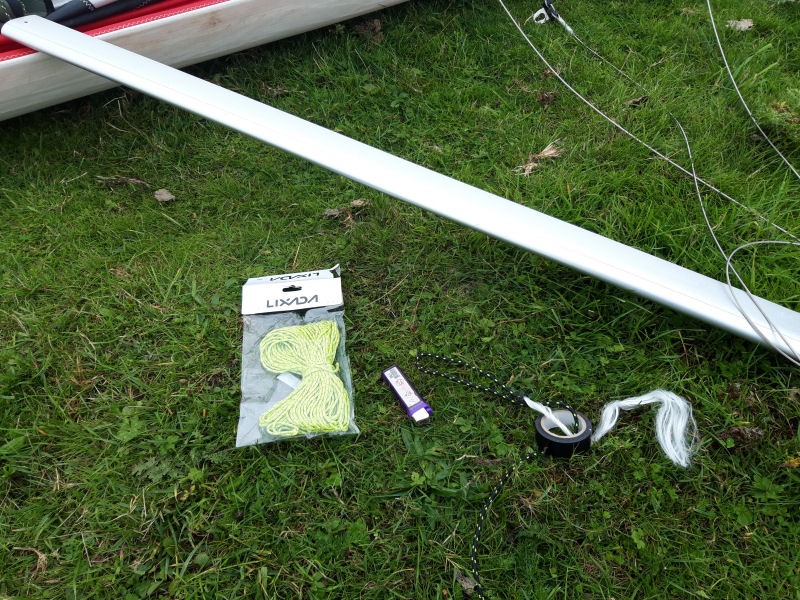 Repair Kit
After a rummage around in my car, I find enough to affect a repair of my glider.
5 Sep 2018

The lift was marginal at best and to have any success of staying up, required flying close to the hill. This was probably possible with one pilot, but with both of us sharing the restricted lift, proved a challenge. After my initial beats along the ridge, I had become badly positioned and had flown too far from the hill leaving the best of the lift for Rod. When I managed to claw my way back in close, albeit it, half way down the slope, it was too late to recover and it wasn’t long before I skimmed the trees at the foot of the hill and the decision to bottom land was upon me.

The bottom field undulates, so to ensure a landing on as level ground as possible, I flew down a shallow gully that was ideally positioned straight into wind. I transferred to the uprights early and I accelerated the glider and descended. As my airspeed began to drop off and that sweet spot approached, I pushed up and out hard. The glider responded and slowed as the nose pitched upwards and my legs swung forward as my feet met the ground. A perfect no stepper landing!

It was far from one of my best flights, but it was great to finally be back in the air again – even if it was for a short duration! 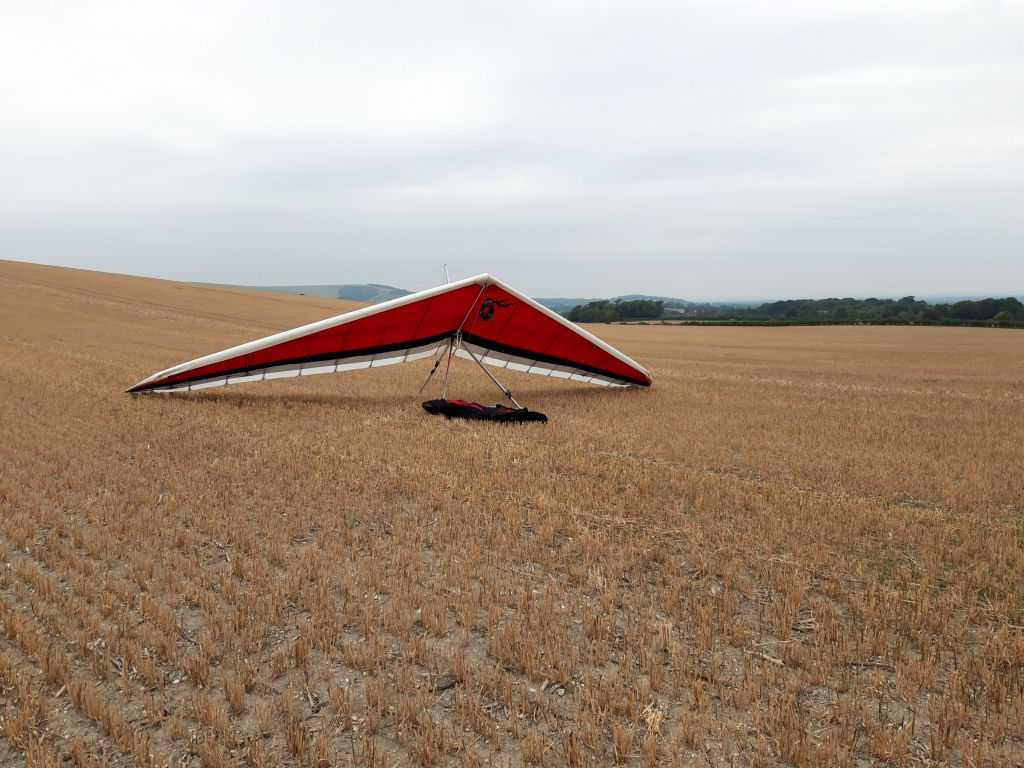 U2 Bottom Landed
My U2 in the bottom landing field after a short but enjoyable flight.
5 Sep 2018

A good Pre flight check
Thanks to share us this event, once I found the pop rivet that fix the cleats on the control bar nearly to jump away. Fortunately was a day flyable without VG. One day I will reach you, have a flight and share a beer to say thanks to you for your perfect exam test for BHPA pilot rating. I have IPPI card pilot rating with 75 Hours flight on a seedwings spyder but to be current I will do the test for pilot rating here in UK.regards
By Luca on Sat, 6 Oct 2018 11:10