Friday, and back to Loja again. The wind was even lighter, but a few local pilots had turned up, including a chap called Bobby who had moved to Spain from England! I could see why, the Spanish siesta, weather and endless opportunities for flying! However, the conditions today were not as promising as the previous days so I was thinking this was going to be a simple top to bottom, as our experience and gliders didn't really permit a flight of massive height gain. The challenge was to see just how long we could stay up! 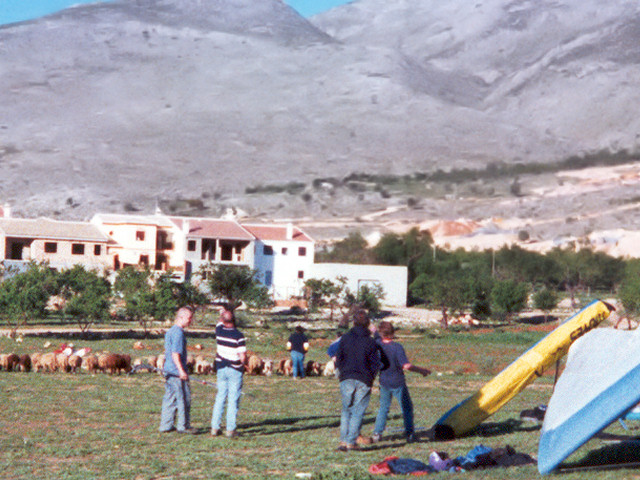 Loja Bottom Landing
Loja's bottom landing and a local shepherd brings his flock out to eat the grass and say hello to us as we pack away for the day.
6 Apr 2001

Unknown to the rest of us, Ozzie had given John a challenge (get to a certain peak, then cross the valley or something, far beyond my capabilities!). So, as the rest of us were preparing for launch and queuing in the launch area just like us Brits do, we were somewhat surprised to hear John's apologetic airborne, "Oops, cheeky take-off!", as he jumped the launch order by launching from the car park, swooping over the rest of us and onward into the clear sky. 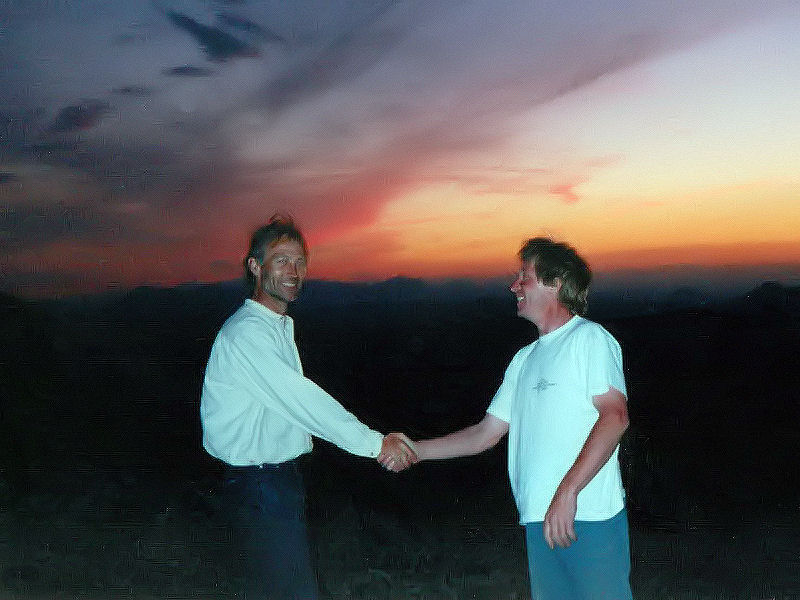 John and Ozzie
As the sunset at Loja, Ozzie congratulates John for a fantastic week of flying in the Sierra Nevada mountains in Spain.
6 Apr 2001

My flight lasted around 30 minutes as I scratched around for lift. Giving up trying to get some lift, I decided upon a glide into the valley for a little explore. After visiting the local sites (bridge, road, tree, house... yawn!), I headed back to the landing area for landing. I still had excessive height so I executed 2 large circular laps of the landing field, with Tony voicing obscenities at me from the ground. As I headed down wind on my final turn, I realised that I was approaching the ground faster than anticipated. The immediate execution of a sharp turn (lots of roll) and straightening into wind landed me safely! This was all captured on Tony's camera (I haven't seen the pics yet). 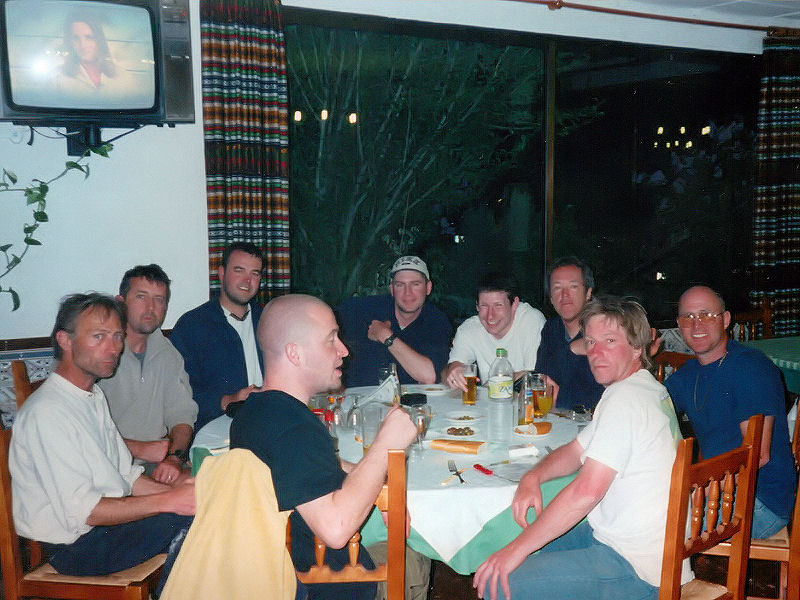 Team Photo
The perfect end to the day and to the week; team photo of John's flying trip to Spain. Starting from far left and going clockwise around the table: John, Matt, Mark, Dan, Tim, Roger, Tony, Ozzie and Dave.
6 Apr 2001

Mark had an interesting approach, mainly due to the small tree between him and the landing area which he had to literally step over to clear!

A few of us were lucky enough to get a second flight in. The thermals had switched off, but the wind had increased enough for some gentle ridge soaring. This was the perfect conclusion to the day, and to the week!