North-westerly and showers; not the most promising weather forecasts for flying! I had a day off work and after consulting Wendy (the Devil's Dyke weather station) I packed up and headed to the Dyke, arriving there near 10am. Parking charges of £2 a day are now in affect at the Dyke, but as a National Trust member, with my 'park for free sticker', I didn't worry.

Initially I was the only pilot there. The wind felt very strong, much more than the forecast suggested so I took my time unloading the car. A short while later Nick arrived then Tim and a bit later another pilot named James making 4 of us in total. The wind was now WNW and by the time I was ready for takeoff, the wind dropped significantly. It looked like I was wind dummy (first to launch), so I waited for a couple of minutes for the wind to pick up. Out in front I saw some birds soaring and felt the wind increase. With that, I accelerated the glider, launched and turned immediately towards the bowl. I'd assumed with a northerly component in the wind that the bowl may work well, but it didn't. I was able to scratch around, with my height fluctuating between just above to just below ridge height. Tim had launched almost the same time as me but he was now working the northern end of the pub hill and looked to be a good 200 feet above me. That was an invitation I couldn't ignore so I headed that way and was able to make some good height. 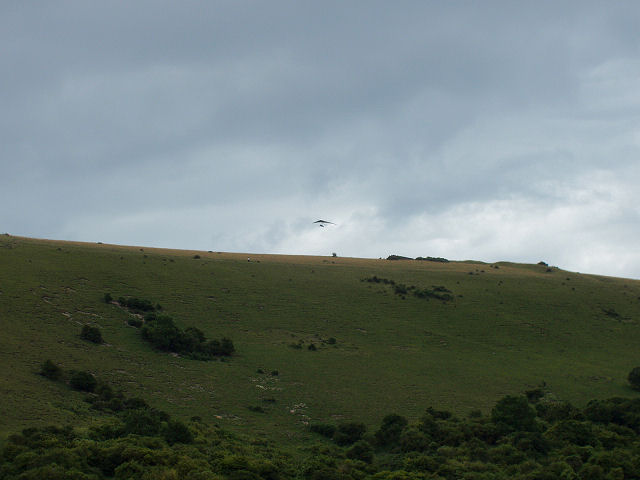 The wind was very much more westerly than I had realised so the pub hill was the only place to be. Nick had now joined us and between the 3 of us, we worked the lift making height gains of around 500-600 ft then dropping to ridge height then re-climbing again. It was definitely cyclic lift. After 20 minutes, Tim top landed but I decided to see if I could break the hour again. Nick was doing his usual antics (buzzing launch a few times) but I simply concentrated on staying up.

Tim rejoined us and all 3 of us continued to work the lift until it simply switched off. That left all 3 of us scratching for enough height to top land. Unfortunately, 3 gliders trying to work a very small area of lift wasn't compatible with the available airspace. I was the sacrifice! After getting low, I opted for the bottom landing field. On my way down I beat back and forth across the tree line which was a surprising source of lift, however, it was evident I was heading downwards so I ultimately set-up for a slightly cross wind landing and was able to successfully put down without event (even if it did feel a little fast). 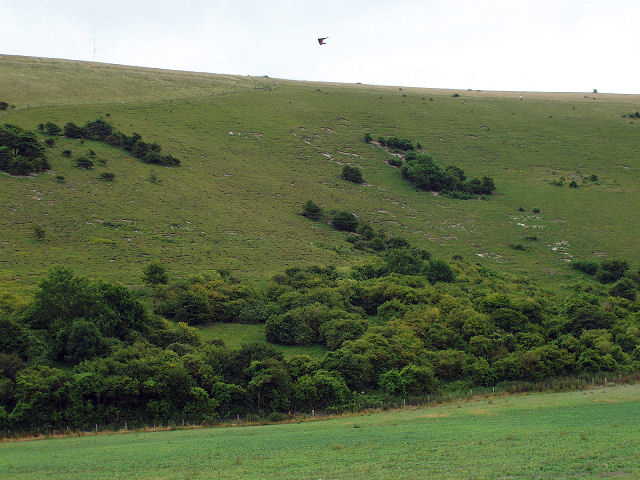 Someone somewhere must have felt guilty for squeezing me out of that crucial lift at the end, so a car was sent down to collected me. That saved me from that long trek up the front of the hill back to takeoff!

Back on top everyone commented that it was very noble of me to free up the airspace so they could land (of course with a sly smile on their faces!). They even convinced James, who was now ready, to launch. I was convinced it would be a one way ticket so jumped into my car and drove down to collect my glider. If James were to go down, I'd be happy to return him to the top. 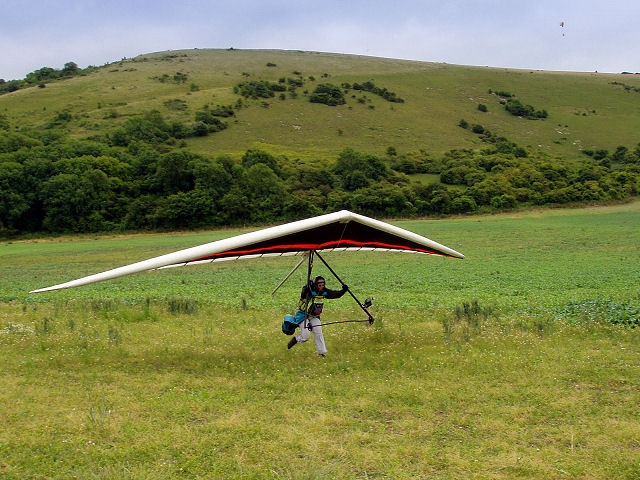 Bottom Landing at the Dyke
Bottom landing as the paragliders arrive.
8 Jul 2009

Back at the bottom landing field, I could see James was doing a fine job of scratching in the available lift but ultimately it was futile and he soon joined me (I was able to snap a picture of his final landing approach). A short while later a couple of paragliders appeared, as they struggled in the weak lift it signalled to me the end of flying for today.

Well I didn't set any personal bests, but I think all the recent towing with the Suffolk Coastal Floaters Hang Gliding club has certainly improved my flying. I'm sure on days such as this in the past I'd have been in the bottom landing field that much sooner!

Well who would believed it... some months later I'm scanning YouTube for recent hang gliding videos and I find that someone had videoed my launch: