Over two months since my crash and my glider is finally repaired with thanks to both John Barratt from South Downs Hang Gliding, and Steve Elkins from Avian. The Sting now has a new leading edge (pictured below), and a new set of uprights. Ideally I would have liked to wait for a nice smooth ridge soaring day for my return to flight, but as usual, the British Weather conspired against me and it was Aerotowing that would once again take me to the skies. 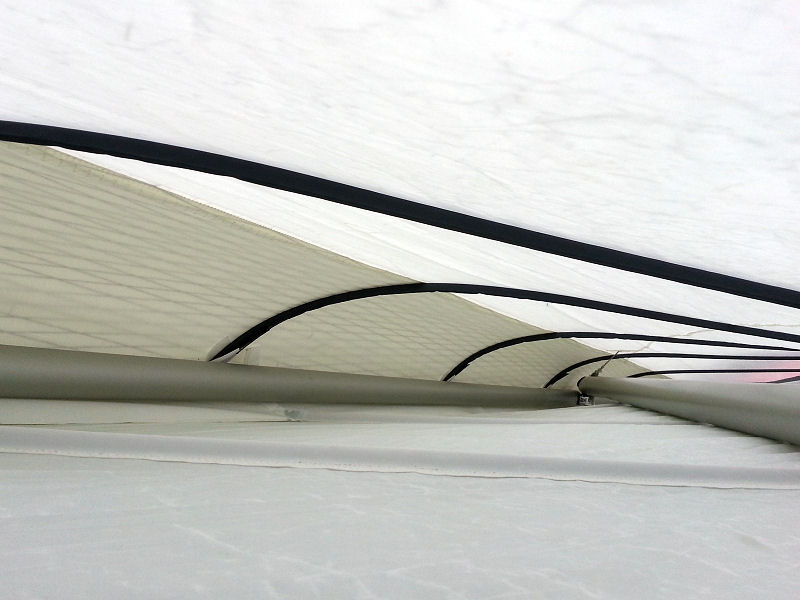 I was first to arrive at the Aerotow field and began to get the equipment ready for the day. The sun was hot and I suspect this was one of the primary factors to the very relaxed start to the day. By late morning the tug was rigged and test flown. Thereafter, we all began to rig our own hang gliders.

As usual, everyone was waiting for someone else to have the first flight. First away was a rigid wing, then John Mc, then myself. I confess to being very nervous; last time I flew I crashed and the memory of this was still raw in my mind. Crazy thoughts fleeted in and out of my mind; "is the glider safe?", "What if it has a turn in it?", "What if something was missed in the repair?". Of course I knew that I had scrutinised my glider the weekend previous, John Barratt had given it a thorough inspection and Steve Elkins had had the sail off and repaired the broken leading edge.

Hanging from my glider on the launch trolley with the tow line being pulled taught in front of me, I was about to find out if my crazy thoughts were unfounded. It was at that point I noticed something wasn't right; "Where was the bridle?". Looking down I realised that I had inadvertently released the towline. I called "Stop!", and the launch process ceased. Between Ozzie and myself the towline was re-attached. Ozzie tipped me to call "Hold" next time, as when you call "Stop", the tug's engine is switched off and re-assuming the launch process is more involved.

I was ready to launch again; the launch procedure continued practically from where it was interrupted. When I felt the towline tension and gently pull me forward, I called "Hold". Everything went into pause mode. This is the point when the suspense and anticipation of what's about to happen comes across me! I could feel my heart thumping in my chest; I drew in a deep breath, held it for a moment then slowly released it. I was now focussed and calm. The words "All Out" erupted from my mouth and within moments, the micro-light responded and began to surge forwards, hauling me along the ground with it. 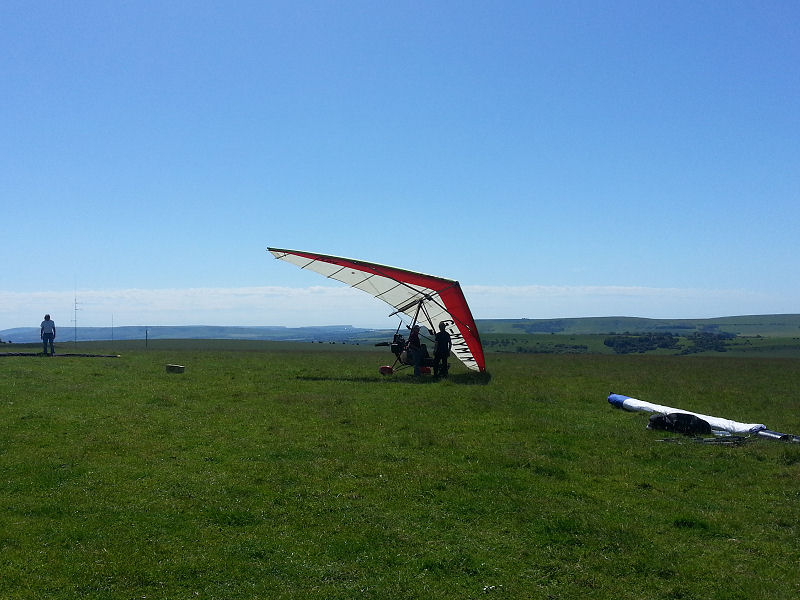 The sensation of the grass whizzing past inches from my chin and the ratter tatter of the trolley bouncing across the bumpy field was confirmation that I was about to leave the ground. The glider wanted to lift, but I held on to the trolley for just a few more seconds to allow for a little more airspeed to ensure a positive departure from it. As I released the trolley, the right wing lifted more than the left; what followed was a mild oscillation of roll corrections until I settled in behind the tug.

As expected, I felt the usual high levels of bar pressure, reminding me that I still need to find the sweet spot on the keel for the top tow point. As the tow progressed, I felt comfortable with it although the air was getting a little bumpy in places, a sure sign that there was thermic activity.

When I reached 1500ft, the tug and myself hit the edge of a thermal. First, the tug climbed above me as it entered the lift then dropped as it flew out of the side of it. As the tug dropped I hit the lift and climbed; I decided now was the right time to release!

As expected, I had released into a thermal and gently began to circle, trying to find the core. I worked this lift for the best part of 5 minutes before it dissipated or I misplaced it. Thereafter, I explored the local airspace trying to find something else that would prolong my flight. Unfortunately, I didn't connect with anything significant so returned to the launch field to set-up for a landing.

I was flying so incredibly cautiously, trying to avoid the HAM radio enthusiast's antenna in the top field, avoiding flying over the houses and generally making a complete cock-up of my landing approach. The net result was I came in too high and ended up landing way down the field. I was pleased with the landing, especially as the part of the field I landed in was sloping downhill! Shortly after, Ozzie arrived with the trolley and trike, towed me and my glider back to launch; saving me from a very hot sweaty walk back!

Later the wind decreased to almost nil and what little wind we had seemed to blow anywhere between West and South East. With this knowledge, I decided that I would conclude my flying for the day and wait for more desirable conditions. All in all, a total success! My glider has returned to the air!