Gale Hanging at the Dyke

I almost didn't turn up - a result of getting paranoid by comments on the Southern Hang Gliding Club's Telegram service reporting that it would be very windy, gusty and would blow out later. I confess, after monitoring the forecasts myself through the week, I had drawn similar conclusions! Still, there was no excuse not to visit the hill with my glider - I would be able to see for myself what was going on and have the opportunity to rig the glider and give it a final check over after its recent service. 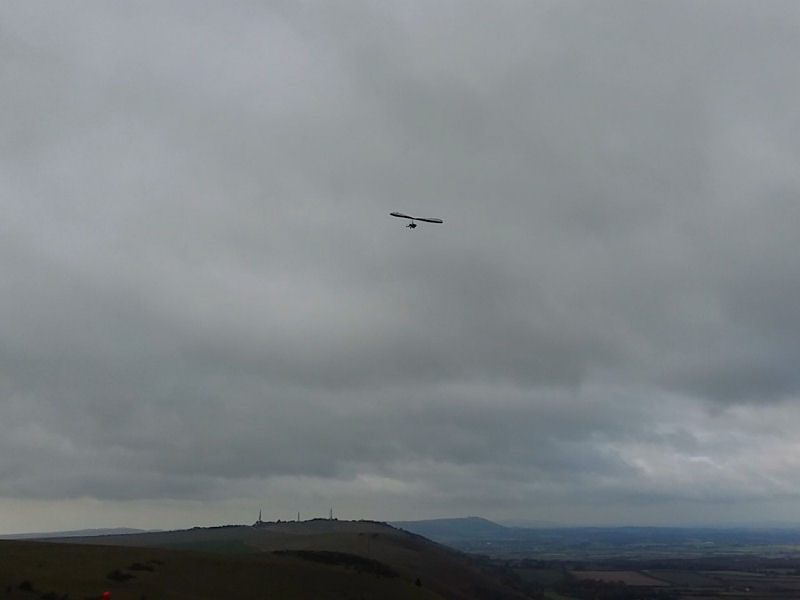 Tandem Over the Dyke
Matt from Airsports Sussex flying with a passenger over the Devil's Dyke.
5 Nov 2016

When I arrived at the Dyke it was notably cooler than my last visit and a good reminder that the cooler months of winter were almost upon us! I had to wear my flying suite and winter gloves while I rigged the glider - toasty warm!

I had a welcomed interruption from Matt from Airsports Sussex that needed launch assistance for himself and his tandem passenger Wendy. After they were safely away and zipping back and forth above our heads, with Matt making every effort to get a scream from her, I returned to my glider - still procrastinating about flying or not. It wasn't until Steve gave me one of those; why aren't you flying type of grins; that I decided I would fly.

David assisted me and glider to the front and I quickly took to the air. For the wind strength I was only able to climb 100-150 feet above the hill-top and with those already airborne all flying in front of the pub, I decided to cross the bowl and set off down to Truleigh Hill. After all, with such a brisk wind coming from the north-west, it was bound to be working down there! Famous last words! I made it, but it was hard work with my glider barely penetrating against the headwind and I had to be careful when I crossed some of the 'gaps' (if you can call them that) on the way to Truleigh Hill.

Once at Truleigh Hill I simply turned tail and headed back to the Devil's Dyke - that was more fun as I screamed back along the ridge with a tail wind, admiring the numerous birds of prey on the slopes below! My only moment of real excitement happened when a sail plane suddenly appeared directly above me flying towards the Dyke. It was probably only 50 feet above me and left me for standing as it blasted its way down the ridge! It's a times like that, that I wished I'd attached the camera to the glider!

Once back at the Dyke and with the sail plane long gone, I joined the traffic flying there and at one point felt like I got pinned over the Dyke pub - with an arm full of VG and the bar stuffed, I penetrated forwards and was soon re-established just in front of the ridge. As I contemplated if the wind had increased, I somehow found myself once again headed down to Truleigh. Maciej was already on his way but turned back when he met the Pylons and I was surprised when David passed under me, 100ft lower, also on his way to Truleigh Hill. I shadowed him all the way down to Truleigh but left him there when like before, I turned tail to return to the Dyke.

Back at the Dyke I was now ready to top land. Since my accident here on the 23 March 2014, I've been exceptionally nervous of this area and had avoided it - particularly in stronger winds! I had decided, even though the air had lumps in it and was strong; if I was ever going to conquer this fear, today I would have to land in the Paddock. I had a mental checklist rehearsed; get onto the uprights early and before I had committed to my landing approach; fly down the fort embankment, turn into wind and land - all the time keeping my eyes focused on the area I wanted to land in. This mental rehearsal worked well and I executed it perfectly. The only snag, I was too high and skimmed across the Paddock and missed it by about 15 feet! I had time to hand signal to Neil that I would have to go around for a second approach as I passed him!

With the tendonitis in my wrist flared up again I struggled to get the glider to the edge of the field, but once there I collapsed the glider and retired for the day! Not bad for a day when I thought I wasn't going to fly!