What amazing luck with the weather, one week since my first day with Flylight and I'm returning to complete my aerotow endorsement. As per last week Will and I met up in the Aviator Hotel for breakfast after which we headed over to meet Cathy and Stewart from Flylight.

Our first flights were solos on the school's Target 16 then, depending on how that went, we'd be converted to trolley launching our own gliders. Although a week had passed since my last aerotow flights, flying the Target felt very familiar. The launch and tow went well and as Stewart had instructed me to land by the hanger if I was happy, that's where my first flight of the day concluded. I was now ready to switch to my own glider.

Back at the hanger Will and I fetched our own gliders and moved them out to the launch area. I'd be using my Koch release, so fitted it to my harness. For my first flight I'd also have a fin fitted to the keel to help whilst on tow.

After Will's first successful tow my glider was placed on the launch trolley where I clipped in and held onto the trolley's strings (this would keep the glider on the trolley during the initial launch moments). When the tug was ready and the slack taken up the launch began. 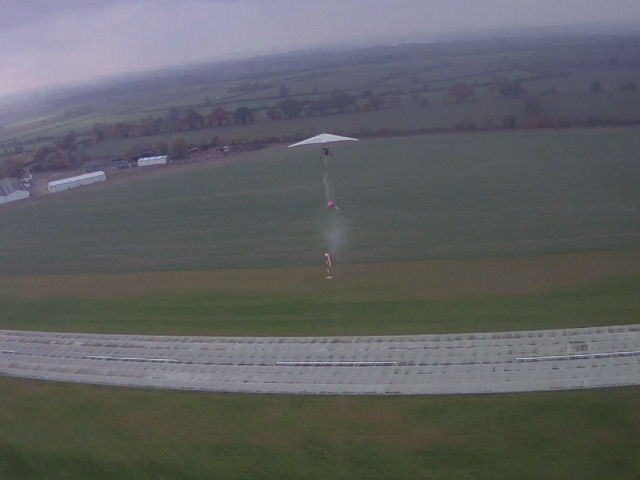 It's not all Plain Sailing!
Flying my own Sting 3, moments after launch either the weak link fails or the Koch tow release releases the towline.
1 Nov 2010

Compared to flying the Target, towed with a tow leg set-up, towing from my chest release on my Sting proved to be more of a challenge. My glider climbed more than I had expected and with the base bar pulled well back I was barely able to maintain a similar altitude with the tug. As the tug climbed and I dropped to the tug's altitude some slack developed in the towline. Easing the bar out slowly I tried to reduce the tension fearing a weak link failing. I seemed to get away with it, then, either the weak link failed or my chest-release released the line (no input on my part). Fortunately I was sufficiently high to quickly turn the glider around and glide back to launch to safely touch down. 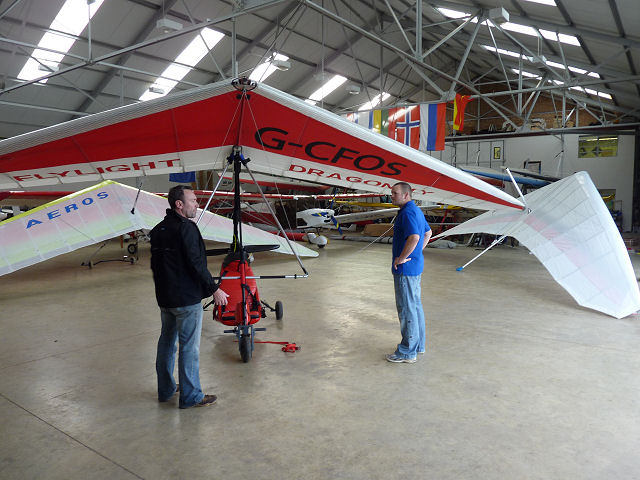 Flylight Hanger
Inside the Flylight hanger where Will and I rig our gliders ready to continue our aerotow endorsement.
1 Nov 2010

As I'd failed to get a complete tow in, I was put back on the trolley for a second attempt. Fortunately it went to plan (no weak link or premature releases). Cathy towed me to cloud base where she waved me off. My vario was reading 1,800 feet and with clouds around me, I had a very enjoyable glide back down to the airfield where I happily landed in nil winds next to launch.

My next launch went even smoother than my first, probably a result of the trolley launches becoming increasingly familiar. The sun was low in the sky so following the tug was a bit more of a challenge, but when reaching 1,500 feet above takeoff, Cathy waved me off and I enjoyed the remaining glide back to the airfield. 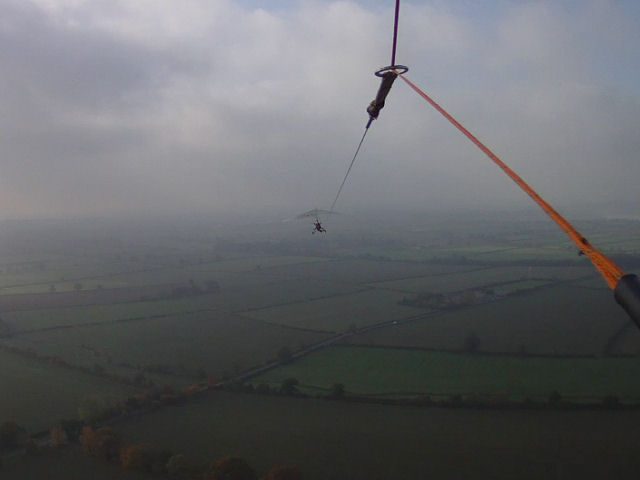 My next tow started off really well but just as we left the airfield boundary my bloody chest-release released the towline for a second time. The airfield was also expecting an inbound flight so I quickly turned my glider around, flew across the airfield and landed. About 5 minutes after I landed, the inbound flight landed on the runway I'd just crossed.

Will had also experienced problems with his chest release system so swapped it for one of Flylight's releases. Will's next flight was his mile high tow. Stewart and I watched as Cathy towed Will through a hole in the clouds and continued upwards. We quickly lost site of them as there was quite a bit of cloud cover. Eventually Cathy returned and we briefly saw Will very high above the clouds, but that glimpse would be the last we'd see of Will for quite some time! 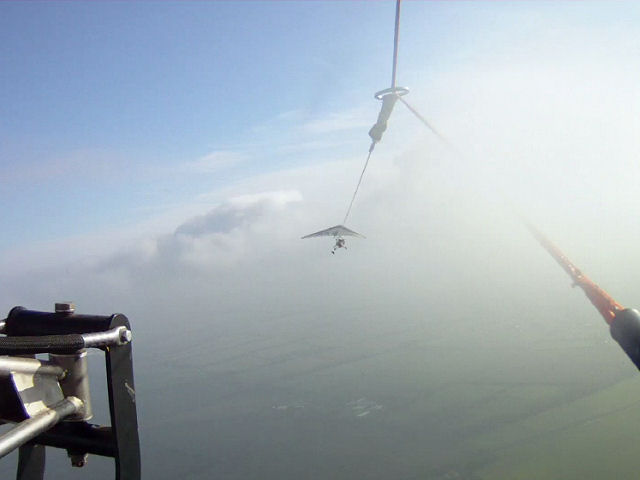 On my next flight I decided to do ditch my koch tow release and use the Flylight system. Back on the trolley I was ready to go. After asking for all out the tug started accelerating and I slowly started rolling forwards, suddenly there was a bang and I saw the towline shoot off into the distance. As the trolley came to rest I assumed the weak link had failed, but upon looking down I realised that the webbing on the release system had snapped. Stewart apologised as he hadn't pushed the trolley and assumed this contributed to the problem. Later we discovered there was a fault with the webbing on that particular release. I wasn't having that much luck! 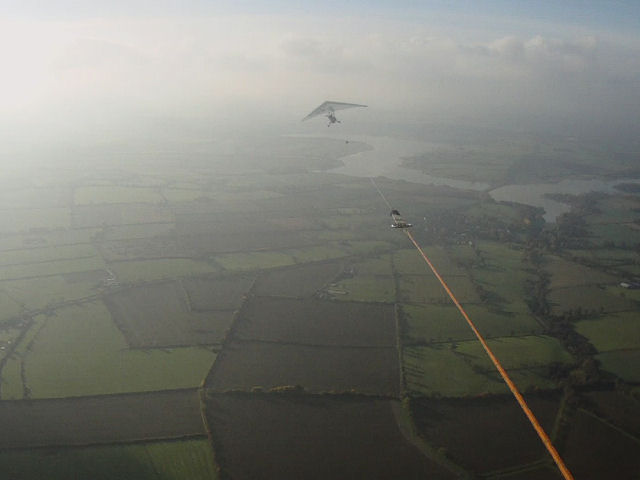 Success
Second attempt launching the Sting 3 and this time success. Here I'm being towed from a chest release system (no tow-leg in use).
1 Nov 2010

Sadly this meant switching back to my own chest-release system that was causing me so many problems earlier. This was to be my high tow and I was desperate to get up there but sadly the koch chest-release would put an end to that! As before, shortly after launch the towline was released. I'm pretty sure I swore out loud before swinging the glider around to land near the hanger. With the sun low in the sky and Will still missing I decided that was it for me today. 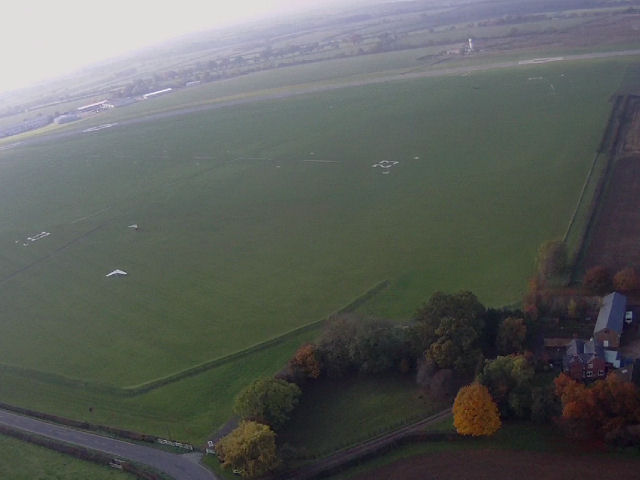 Landing Approach
My landing approach with Will ready to launch on his Discus and Cathy ready on the tug (they're just waiting for me to get back!)
1 Nov 2010

By the end of the day I was a little frustrated that I didn't get to do the mile high tow (static winch chest releases not being so suitable for aerotowing) but as Stewart had said, I'd coped well with pretty much every eventuality that could happen and signed me off for the aerotow endorsement.

As for Will, despite trying to get hold of him on his phone without success he eventually showed up on foot at the hanger. During his mile high flight he'd got disorientated whilst above the clouds. When he did find a hole in the clouds, he couldn't find the airfield so landed at a nearby village where someone was kind enough to give him a lift back to the airfield.