The previous night I and a few others had set-up camp on the runway at Mendlesham. I didn't get the best nights sleep, but at least I didn't have the drive up! After an Olympic breakfast at the Little Thief (the named coined by certain club members) we were all fuelled for the day.

Somehow I was one of the first pilots ready - probably contributed to the fact that the Target is an easy glider to rig. The winch operators were keen to get winching, so I was quickly attached to the line and hauled into the sky. The flight was straight forward and the conditions were hinting of a great day of flying! I was able to make use of some thermals prolonging my flight a little longer than normal. Upon landing, I was instructed to go again, no-one else was quite ready and they desperately needed winch fodder! 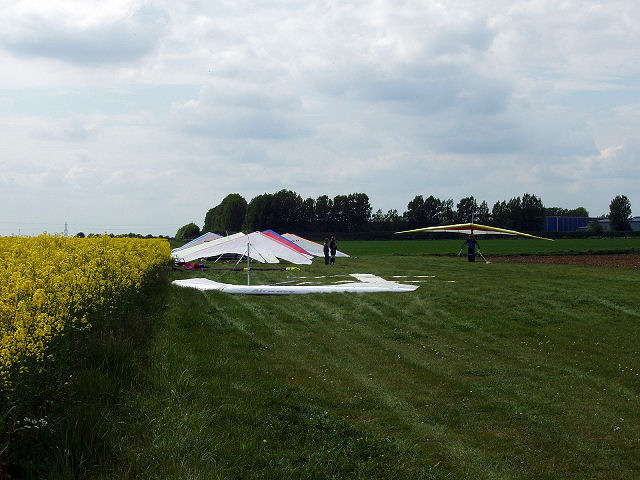 Mendlesham - Boot Camp Day Two
The western end of Mendlesham's runway, gliders rigged and one readying for take-off.
10 May 2009

My second flight of the day was almost a replay of the first but without as much thermal success. My landing was spot on, but no pun intended, wasn't close enough to the spot! I was now really hot and needed a rest. Fortunately there was now a queue of other pilots waiting to be launched, so I retreat to the shade for a drink and a cool off.

Now I would like to think I timed this perfectly. Keith had launched before me and was still in the sky when I launched. Other pilots were now consistently prolonging their flights with the increasing thermal activity. The tow didn't feel particularly fast, but it was definitely thermic. At around 400ft, I felt my glider surge upward and with a muffled thud I felt the weak link snap. I glanced down to see the winch cable dropping away. I was high enough to do a 180, head back to launch and land so I turned to my right and it happened. My vario started beeping so I kept the turn going developing it into a 360. It continued beeping. The glider climbed upwards. This was it, that surge that lifted me and snapped the winch cable was the edge of a thermal and I'd turned directly into it when the weak link broke. It was now time to concentrate; this was my first proper thermal. I started to create a mental image of where the thermal was and a couple of times I was literally spat out of it (that's an interesting but not particularly pleasant sensation), but I knew roughly where it was and was able to return to it. 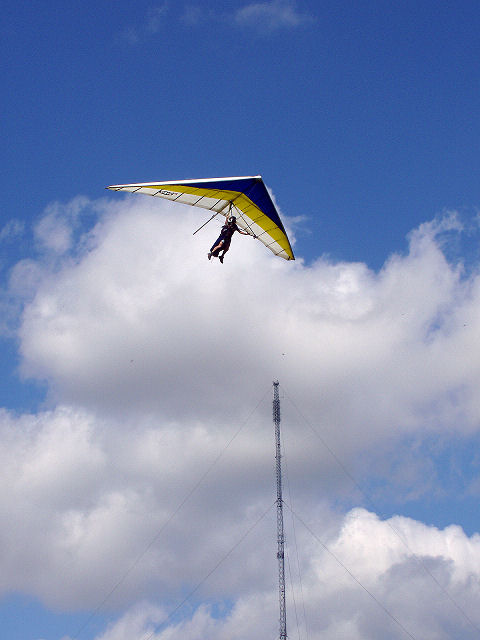 Mendlesham - Boot Camp Day Two
Keith on his AirBorne Sting 2 coming in for landing with the Mendlesham transmitter in the background.
10 May 2009

I was still climbing and working this thermal as effectively as I could. I knew that Keith was still flying somewhere near by and after an initial scan of the sky I spotted him some 200ft below heading for the landing field. I continued to circle in the thermal, occasionally popping out of it but able to return to it, but I was still climbing. Eventually I noticed I was getting close to the 1000ft radio mast. The wind was blowing the thermal and me within it directly towards it. Damn, I was going to have to leave the thermal and head back. One more 360 and that's what I did, I left the thermal.

I returned to takeoff but still had 500ft between me and the ground. My vario beeped again. It was another thermal and the whole process of circling started again. Eventually after some 20 minutes my luck came to and end and I was heading for a landing. After a successful landing I unclipped and walked back to the group of pilots waiting at launch. I had the biggest grin from ear to ear; this one flight had made my entire weekend! Another pilot came up to me and said that was very impressive for a Target; this further increased my grin!

My next flight didn't quite enjoy the success of my previous one, I wasn't disappointed as I was able to prolong the flight a while with some small bits of lift I encountered.

My to be fifth flight of the day didn't quite go to plan. I was ready to go, and when I instructed "All out!", I simply watched the cable in front of me tension, then drop to the ground. I wasn't pulled forward. Apparently that was the winch cable snapping somewhere (not the weak link but the steel cable!). I thought to myself, I'm glad it happened then and not 15 seconds later! That little incident stopped winching for a while whilst the break was located and repaired.

After a bit more of a break, I was ready for my final flight of the day. The weekend had been tiring and I wanted to be conscious enough for my 122 mile drive back later. The sea breeze was now blowing and this was a huge contributory factor to getting 908 off the tow. The rest of the flight was a gentle float back to landing, with one or two possible bits of lift to explore, but nothing much. Upon landing I dropped my glider to the floor and packed up.

That concluded my flying for the weekend. I was completely flown out but full of the thermal bug! I just can't wait for my next one now!