First Tow in Over 2 Years!

Finally, 2 years after my tow training at Lejair I'm able to return to a tow field. The venue is Mendlesham Airfield, the Suffolk Costal Floaters primary tow site. 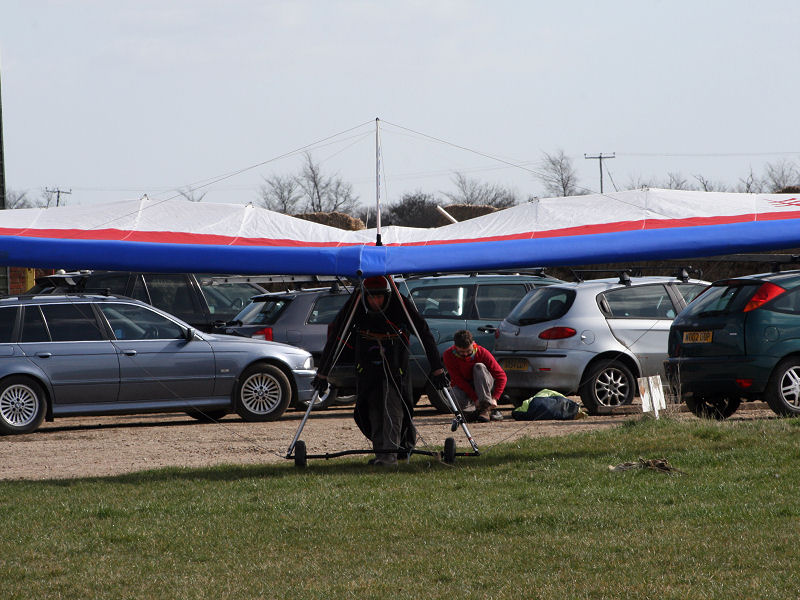 Waiting
Dan waiting at take-off for the winch to become available.
15 Mar 2009

Okay, I was a little nervous trying to remember all the little things I had to do during my tow and ultimate release from the cable. After all checks were complete and the line tensioned I was ready. A quick pause to adjust myself and glider, then I called "All out, All out". This was relayed via radio to the winch operator. Seconds later I was tugged forward, quite a bit harder than remembered from prior training with Lejair! My legs quickly chased as I broke into a sprint, perhaps I couldn't keep up? It didn't matter, I was off the ground! 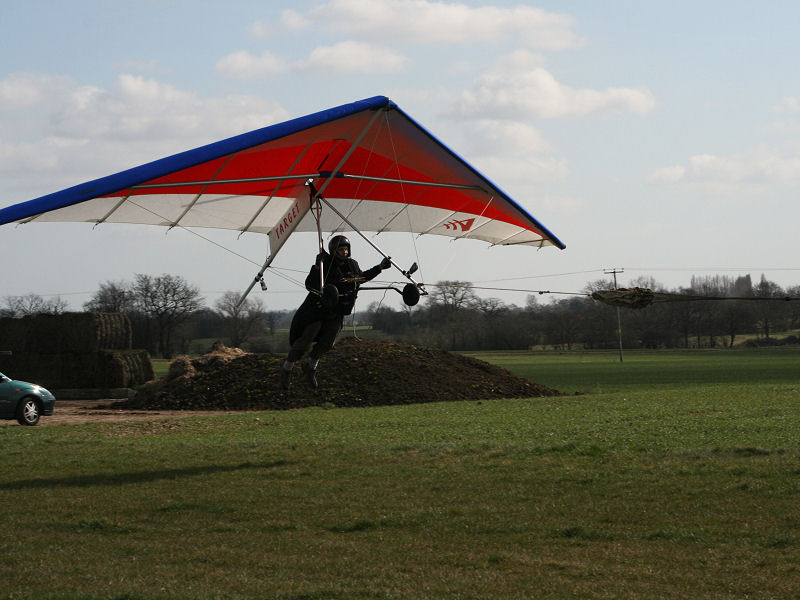 The next bit was a bit of a blur, sensory overload perhaps, I felt the glider drift to the left a little. As it was my first tow the winch operator eased the tension giving me an opportunity to straighten up. I interpreted this drop in tension as a signal to release, so reached down and operated what I thought was the top cable release. Oops! Both cables disappeared and everything went much quieter, I'd completely released myself from the winch and was now dropping. Within a matter of seconds it was time to land, despite my failure to complete a full tow I landed perfectly!

Shamed with myself I walked back to launch only to be greeted with lots of friendly supportive faces and an opportunity to try again! I think the gloves I wore were contributory factor, so for my second tow I decided to remove them. 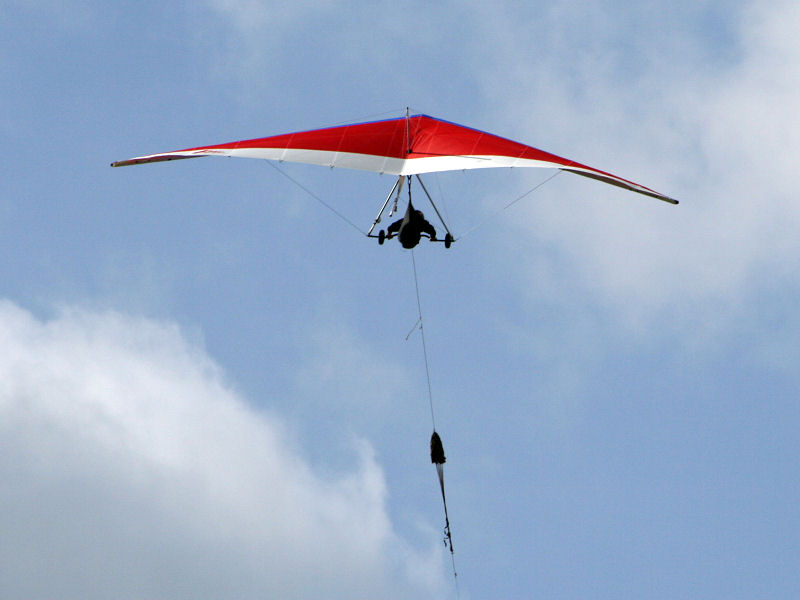 Towing
The second tow begins and this time, no double release!
15 Mar 2009

This time things felt more familiar; I now knew what to expect. Once again, I called out "All out", which was shortly followed by the pull of the towline launching me forward and soon after skyward. This time my eyes were fixed on the winch and I was able to steer the glider straight towards it. A short while later I felt the tension ease, recognising this as my first cue to release I successfully operated the 'correct' release lever, releasing the top line and continueing to climb.

There were a few weak thermals and as I climbed I passed through one, lifting a wing as I did. This induced a mild roll to which I compensated for. The glider then rolled the other way, again I compensated but the glider responded by rolling back the other way. This little oscillation continued through a couple more cycles until I twigged that it was in fact me inducing the oscillation! A classic pilot induced oscilation (PIO)! As soon as I realised what I was doing I centred on the bar and everything settled down. 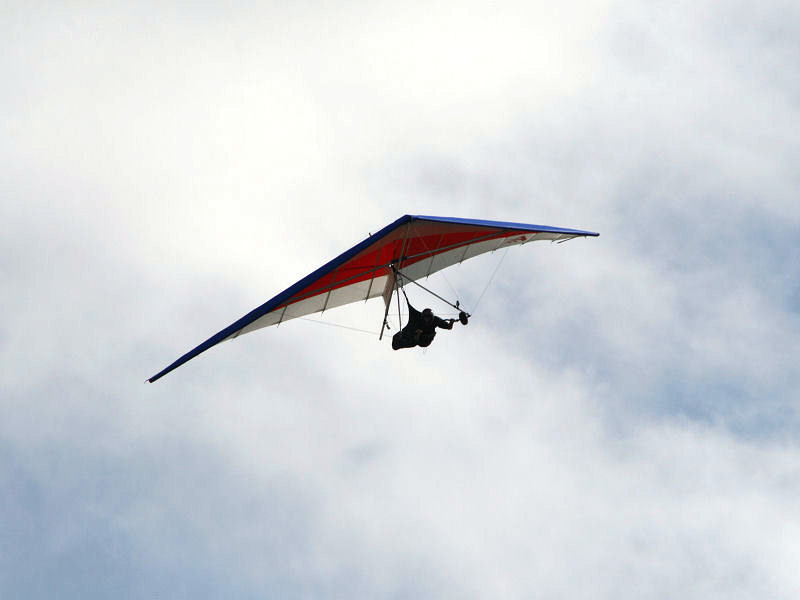 Heading Back to Launch
After a successful tow, Dan heads back to the launch ready to do it all over again!
15 Mar 2009

The top release was uneventful, but probably a little early, and I slowly descended to the ground where I once again had an uneventful landing - and only yards from the target spot!

With each tow I was becoming more and more confident. I had been videoing my previous launches from a keel mounted camera, so for this launch, I popped the camera a short way out on the cross-tube. The launch was uneventful again and I didn't even notice the presence of the camera.

The wind was pretty much blowing from the north now, so I wasn't expecting a high tow. The top release was around 490 feet and reviewing the video footage afterwards I concluded that I could probably release a little higher. The slow descent back to ground was smooth and uneventful, despite my best efforts, there was no rising air to exploit and gravity won the day! 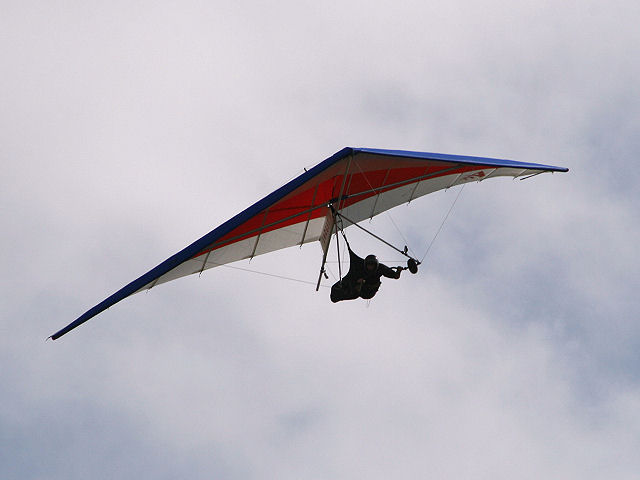 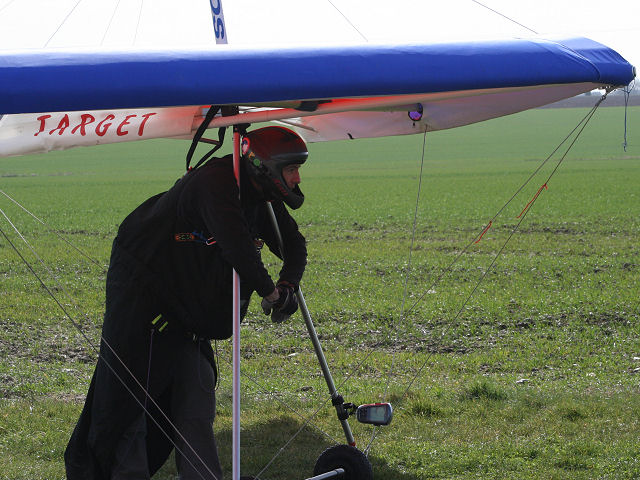