Both the Southern Hang Gliding Club and the Suffolk Coastal Floaters Hang Gliding Club (my two main flying clubs) were heading to the mid-Wales area for the weekend. Due to a Friday evening commitment, I opted to travel up early on the Saturday morning. Yesterday's forecast of a Westerly was suggesting the Long Mynd as the most suitable site, so that's where I was heading.

Arriving early afternoon and seeing the sky literally fully of paragliders I started to wonder if today wasn't quite so suitable but after arriving at the Long Mynd launch and seeing many hang gliders rigged and a few flying I felt more confident.

After paying the £3 site fee I rigged my glider and met up with both the Southern and Suffolk hang glider boys. My personal mission today was to complete two successful top landings - I need this to complete my BHPA Pilot tasks. A short while later I was ready for my first fight (see video highlights below). The launch was very smooth and uneventful and my normal nervousness was non existent, credited to the Sting 3!

Considering the wind strength, there wasn't as much lift as I was expecting. A short distance heading north of launch is a small bowl. Overflying the south facing side of it was where I connected with the first significant piece of lift and I concluded that the wind was more of a WSW. After climbing with some paragliders I set off exploring the Long Mynd ridge. I was having so much fun that I'd almost forgotten about my personal goals, but with that in mind I was now determined. After a few practice approaches I attempted my first top landing, approaching the landing area from the South. During my approach I was aware of another hang glider approaching from the North. Immediately I realised we were heading for the same landing spot and applying the converging glider rule (on the right, in the right), being on the left I turned to avoid conflict. I knew this would lead to an overshoot, but I'd still try getting down. I was able to get my feet on the ground, but I being in the lift band realised it was futile so accelerated the glider with a quick run and re-launched. A touch and go. Unfortunately the earlier lift had reduced and I had to work quite a bit before climbing ready to try a second top landing attempt.

Pondering landing approaches, I opted to try an approach from the Northern end of the ridge. This meant a much easier approach without the need for tight turns and with plenty of different options. Putting this in to practice brought me nicely down into the field. Top landing number one done!

After some friendly banter with other pilots, discussion on where was working and what wasn't, I set-off for a second flight. After a few beats I was around 200 feet ATO so set-up for another top landing. As before, it went to plan and I was back on the deck. Top landing number two in the bag and some surprised faces that I was back on the deck so soon!

With my personal goals achieved I was a little more relaxed on the hill. It was at that point Will came up to me asking if I had any rope in the car. Will then explained that a hang glider had landed in a tree whilst attempting a bottom landing. Eventually said glider was spotted spectacularly resting in the trees, with pilot dangling beneath. With no way of recovering the pilot, the emergency services were called. Soon after an off-road fire-engine equipped with a variety of ladders was on scene and sometime after, the pilot was back on firm ground. The only problem, the glider still firmly planted on top of the trees - that was a problem to be solved by the hang glider pilots later! 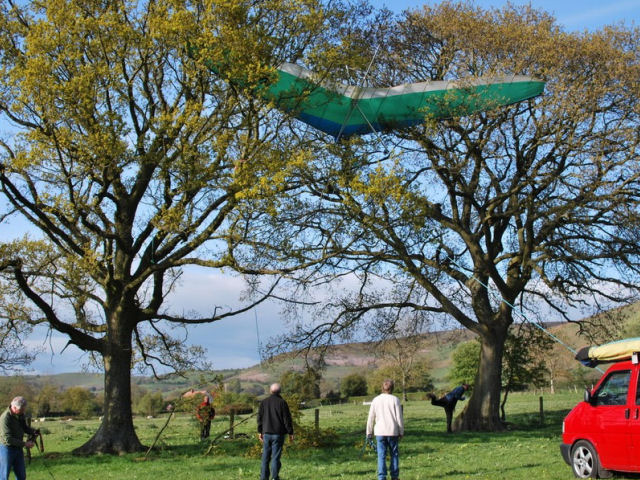 Tree Landing
Quite impressive landing a hang glider here! Miles is one very lucky pilot and the glider is only minimally damaged!
15 May 2010

With all that excitement happening far below, knowing that the pilot was now safe and the wind now picking up I was ready for another flight. After launching it felt like there was lift everywhere; perhaps this was that magic lift people talk about? This time I was now flying with friends from the Suffolk Club. Sharing the air with Will, Duncan and Paul was great - it's not that often I get to fly with people I know well. After reaching a good 1000 feet ATO and the wind seemingly getting stronger I returned to takeoff completing my third and final top landing of the day. That was me done for the day; I was whacked, but chuffed with my accomplishments for the day! 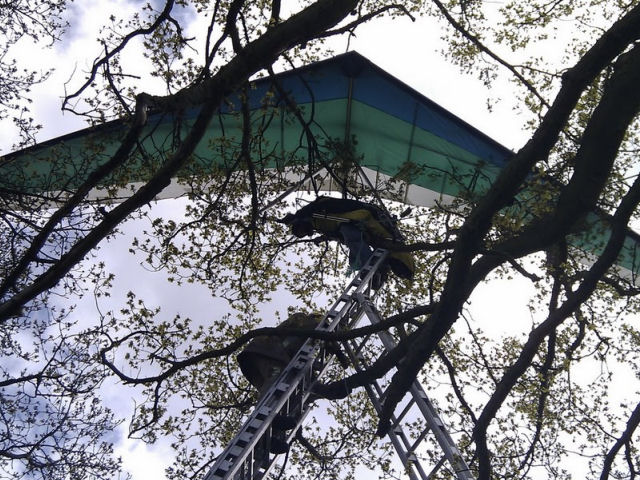 Pilot Rescue
Miles being rescued by the local firemen!
15 May 2010

The only other little bit of excitement (if I can call it that?) was watching Tom completing a very slow top landing resulting in two bent uprights and a glider teetering on the edge of ground looping. In fact, as we all rushed to his aide, the inevitable ground loop happened - I've never seen a glider with pilot attached to it loop that quickly before!