In retrospective, I should have listened to my inner voice and opted to fly another day but I feel fortunate enough that I was able to walk away from this one; even if my glider didn't! 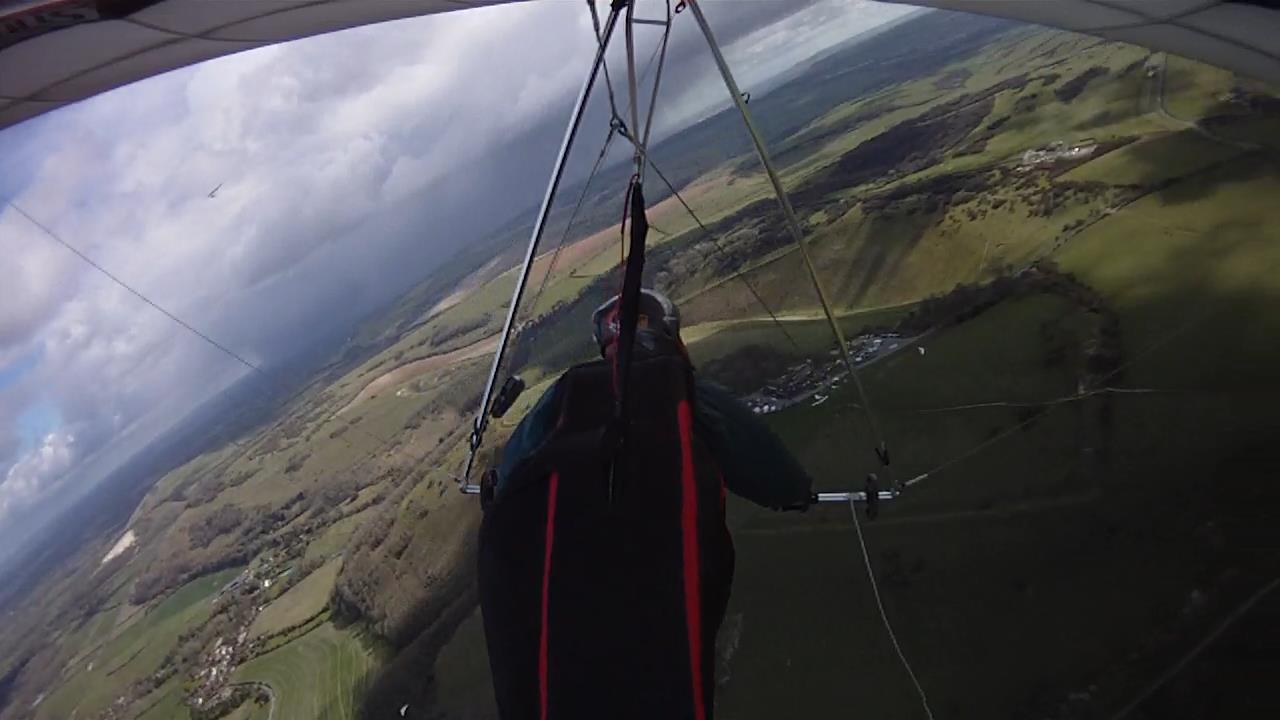 Storm in the Distance
Thermalling over the Devil's Dyke pub with some active weather not too far away!
23 Mar 2014

There shouldn't have been any surprises; the soundings were indicating a high possibility of CuNimbs with moderate north westerly winds. My only real intention was to collect my hang gliding wheels that I left in the bottom landing field on my last flying day but I took my glider along just in case!

On arrival it was windy, but a few pilots had launched and were doing pretty well. For the given wind strength I was surprised that they weren't climbing higher, but all in all conditions appeared to be top end but doable. To the west rain could be seen falling and similar but darker looking cloud to the north was more likely to head in my direction.

After much procrastinating I decided to fly as I was eager to sort out my landings of which I was now struggling with. From take-off it was strong and although it eased a few times, wind strength and 'cloud suck' were in the forefront of my mind. After 30 minutes, the sky seemed to be lifting everywhere. It didn't really matter where I flew, I just bumped into lift. I even managed to penetrate beyond the road in front and still easily find lift. At one point I neared cloud base. Any normal day I would have pushed on, but I was very aware of over development, so looked for the next blue hole, pulled the VG on and headed for it. Quite a few times I was surprised to see I was top of the stack and was even more amazed when I observed the rigid wings several hundred feet below me!

Finally I caught a very well developed thermal which I easily worked up to 1500 feet above the paddock. It started getting very rough and either side of me, two storms had developed and were dumping rain towards the ground. I pointed the glider back into wind, cranked on the VG, pulled the bar in and pointed my toes. The glider simply sank straight down and barely penetrated forwards! I think I could have landed in the paddock by one simple vertical descent, but decided to go around when I got a nasty spanking about 200 feet from landing.

After going around and lining up for landing everything was going well. I didn't go too far back of the Paddock for fear of landing in the trees. John was already in the paddock slowly moving to the edge and I was committed; this was the point when the wind increased and started to howl through! I'm not too sure what happen next, everything felt good. I was flying with my right hand on the upright and trying to land to the left of John. As I raised my left hand towards the upright I may have popped the nose slightly which coincided with a strong gust of wind. The glider responded by veering sharply to the right. I tried my very best to avoid John's glider and dived on the base bar and opted to plough in just in front. I didn't quite make it and clipped John's glider with the keel. I'm not sure what happened next, but I remember being upside down for a moment before landing on top of my glider. Strangely, it felt quite comfortable. No pain or sudden impact, in fact, I was quite happy lying there as everyone rushed to my assistance! For a second I wondered why everyone looked so concerned then it dawned on me, I'd had an epic crash!

Through some amazing fortune, I had crashed without sustaining a single injury. I'm not sure, but I think when I realised there was nothing further I could do, I simply let go, put an arm over my face and allowed the glider to take the full force of the impact. My glider did this very well and absorbed the energy by snapping both uprights, the entire length of the right leading edge, bending some batons and whatever damage I'm yet to discover.

However, my first concern was to find out if John was ok - apparently he was. My attention then returned to my own glider and sadly, it didn't look to be in good shape. It was inverted and was very broken! With the help of all the pilots on the hill, my glider was righted and dismantled. The right leading edge had practically exploded leaving sharp jagged edges of aluminium free to cut the sail to pieces. Scott was fantastic and recovered strips of card from his car which we taped around the sharp edges to avoid further damage to the sail. Thereafter, it was a case of removing as much of the broken aluminium as possible and packing it all up!

I cannot express the amount of gratitude to everyone that came to my assistance. It's warming to know that everyone is there to keep a watchful eye out for each other!

My Hang Gliding Crash
It had to happen one day - I crash my hang glider. Unfortunately, the impact was so hard the video stopped and didn't capture the actual crash but I was fortunate to be able to walk away and the glider was repairable!