The wind forecast was mixed with all my web-site resources all saying slightly different things. Still, flying today was of secondary importance as today I was travelling to Suffolk to sit my pilot exam.

On arrival I setup a desk and chair in Mendlesham's hanger and Richard handed over the exam paper and answer sheet. I had 1 hour and 45 mins to complete the exam. Meanwhile, everyone else headed off to Mickfield Hall which appeared to be the most appropriate site for the predominately southerly wind.

The pilot exam itself was much harder and of a format that I was not expecting but I worked through it finishing it in just over an hour. I then re-read the entire paper changing some of my answers - later I'd realise I should have kept with the originals!

As I finished the exam, the guys returned from Mickfield Hall. The wind direction and landing options over at Mickfield were deemed unsuitable so Mendlesham's west facing runway would now be used.

After everyone rigged their gliders, myself included, the fickle wind did a 180 and the decision to reverse launch and winch was made. Unfortunately for the rest of us, that meant carrying our rigged gliders the length of the runway. That was a physical challenge considering the wind was still predominately coming from the south!

Now at the western end of the runway and the wind predominately blowing from the south, winching operations began... sort of! With a 90 degree crosswind no-one was rushing to their gliders.

Conditions hinted of thermal activity and every now and then the wind was pulled around to a more suitable direction for launching. Casual launching then began with Richard taking the first two launches. His verdict, very cross wind, timing launching was critical and the landing approach was unusually bumpy.

With that information, I prepared to launch. My first launch was tricky and during the entire tow up I struggled to keep the glider flying towards the winch - the crosswind was really making this really tricky today. After achieving 600 feet on tow and being almost directly over the winch I released and began my slow sink back to earth. With little hint of thermals I set up my landing approach. As Richard had implied earlier the air was pretty lumpy so I pulled on extra speed for safely and touched down just short of the runway. That would be a 'mild' crop landing then!

My second launch was much better, but again I struggled keeping the glider pointing towards the winch. This time it felt like my left wing was being pushed upwards, perhaps it was a thermal, but I couldn't be sure so continued for the full duration of the tow. After releasing, I flew back to where I thought this thermal may have been. I certainly bumped into something, but couldn't exploit it and eventually ended up on the runway.

By the time of my third launch the fickle wind had now switched from a south/south-east to a westerly. It looked like the sea-breeze had settled in. Faced with the prospect of hauling everything back to the opposite end of the runway we all decided to call it a day. After packing up we headed to the Fleece in Mendlesham for a quick drink and thereafter I hit the road and returned home.

As for my pilot exam, well, I'll be adding some more questions to the pilot exam on this website and I'll update this diary entry when my results are in! Fingers crossed! 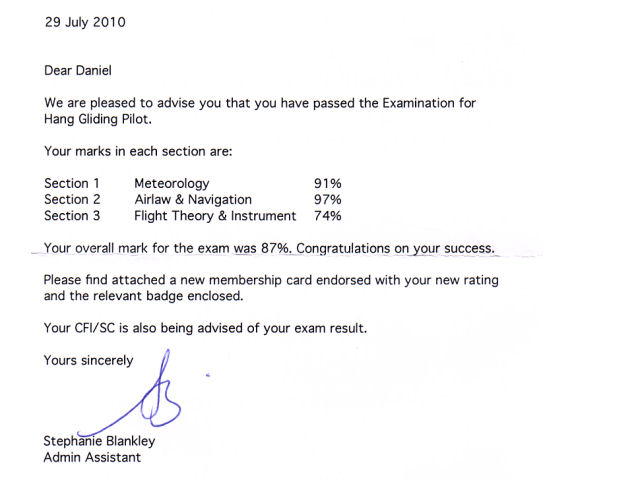 BHPA Pilot Exam Success
My letter from the BHPA confirming my results and new status as hang glider pilot.
24 Jul 2010