A Day of Two Halves

There was a buzz about this weekend and as the weekend approached, the decision on which site to fly had been actively debated on the On Tour e-mail thread. The general consensus was Firle as the wind was forecast to be a moderate NNE in the morning backing to a light NNW in the afternoon. Despite some reservations about the chosen site, I headed to Firle.

My glider was still sodden so I rigged it in the lee of the reservoir to dry it out in the breeze and sunshine. Luke definitely had the right idea and had arrived early and was doing well on his rigid. However, as the flex wings launched, it was apparent that staying up was going to be a challenge.

I decided to maximise my flying opportunities by launching there and then. It was light and I had to fly close into the hill to maximise on lift. There were occasional little punchy thermals rolling up the hillside but I failed to make consistent use of them. With each bit of lift there was also an equal amount of opposing sink. With any chance of staying up I always turned in the lift and accelerated the glider during the sinky bits. This technique kept me up for around 10 minutes, but barely above ridge height. However, as I looked down, I could see other hang gliders in the bottom landing field and after one badly timed turn (in sink), I was well below the ridge and destined for a bottom landing.

After I successfully maximised my glide across the bottom landing field and was landed (ground effect and flying down the gradual gradient), I hauled my glider back up to the road and packed up. Everyone from the top of the hill had now packed up and was heading to the Dyke. I decided to follow...

A Day of Two Halves
A quick video summary chasing the wind from Firle to the Devil's dyke.

The advantage of not having to short pack my glider resulted in a very quick rigging time when I arrived at the Dyke. However, by the time I was ready no-one was flying as the wind had dropped. I decided to wait for the next thermal cycle to roll through and gamble on staying up when it did.

After 10 minutes standing under my glider, clipped in at the front of the hill, I felt a slight breeze. Looking upwards I saw some cumulus clouds that had built overhead and decided to launch. My vario beeped and I slowly climbed which triggered another hang glider pilot beneath me to launch. It was hard to find a consistent climb, but eventually I found something and worked my way to around 600 feet above takeoff. I had noticed a buzzard circling below me and it wasn't long before it circled around me (in the opposite) and continued upwards. Sadly, I was unmatched in performance and was unable to follow!

The shadow of the cumulus clouds below began to dissipate and with that, the lift began to reduce indicating to me that it was time to land. There were already several hang gliders in the bottom landing but I had just enough height for a top landing. To maximise my chances of an uneventful landing, I opted to land in the large field behind the bowl. A few others had already landed there, so there was certainly no shame in it (and so there shouldn't be; it's a much easier landing than the Paddock in my opinion).

After I had safely touched down it was time for a much needed ice-cream. Shortly afterwards, the paragliders took to the skies and I decided to on a retreat home, pleased with the fact that I had flown two sites in one day and made the best of the conditions. 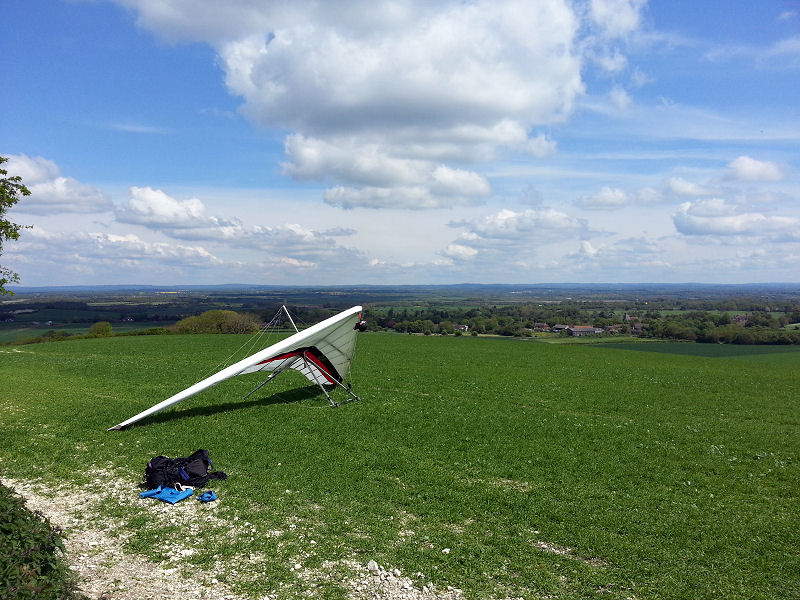 Bottom Landing at Firle
My Sting 3:168 just up from the bottom landing field after a carry up the first part of the hill.
25 May 2013 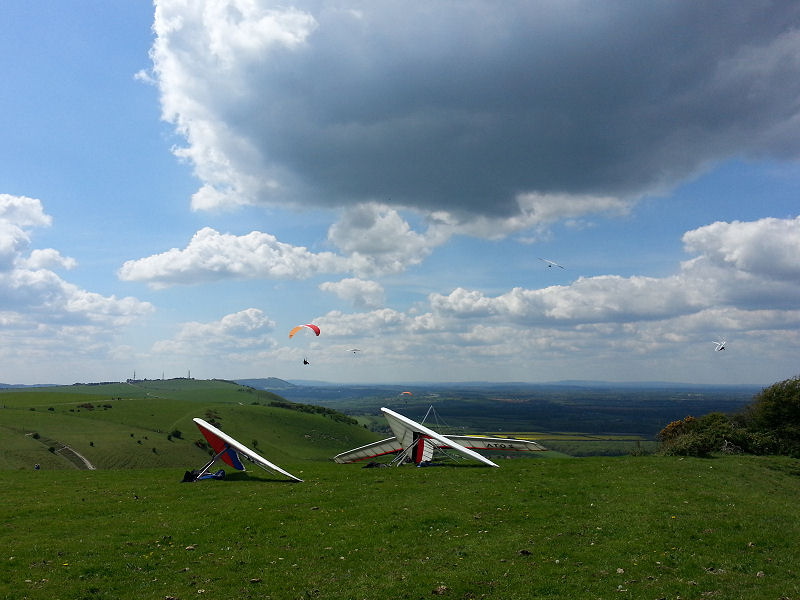 Devils Dyke Top Landing
After a quick thermic flight I land my Sting 3 in the large field behind the paddock. I had to stay with the glider due to large herds of cattle!
25 May 2013