My alarm sounded at 5.30 am, I was certainly suffering from sleep depravation, a result of a long weekend doing the BHPA club coach course and the commuting and early starts that accompanied it. Outside a heavy dew coated my glider bag that was resting on my car roof and to the east, the first hints of the approaching dawn broke the darkness of night.

Two hours later, with the worst of the M25 and M1 behind me, I arrived at Sywell Aerodrome. Will, a fellow winch pilot from the Suffolk Club, had already arrived and sourced a fried breakfast in the Aviator Hotel. It didn't take much convincing for me to join him. After breakfast we were airside with Stewart Bond from Flylight. After introductions, we were sat down in the 'classroom' and thoroughly briefed on the Aerotow environment. After paperwork was completed we moved to the airfield. Our first flights would be Tandem flights on an Aeros Target 21 that had been equipped with wheels for ease of launching and landing.

It was a strange sensation, not only taking off with my chin merely inches from the ground, but also having a body to the right of me! Stewart, the body to the right of me, would be piloting during launch then shortly afterwards would instruct me to take control using the words "You have control". Will, operating the radio was relaying instructions between the glider and the tug. After all checks had been completed and appropriate instructions given we were rolling across the airfield being towed by the microlight.

I was instructed to hold the control bar but not apply any control inputs. This would allow me to feel the range of control inputs being applied by Stewart so I would know what to expect when taking control. After a safe height was achieved Stewart instructed, "You have control" to which I replied, "I have control". I was now flying the Tandem. 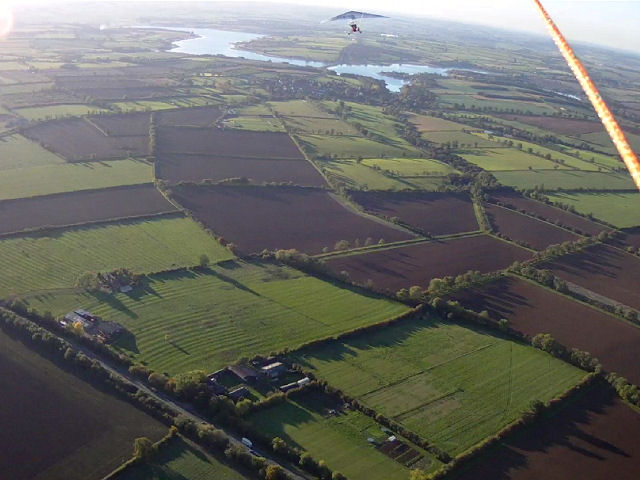 Following the Tug
Concentrating on keeping the tug in the 'sweet spot'.
25 Oct 2010

I was amazed at the level of concentration required on my part to fly in close formation with the tug. Initially I pitched up, down, rolled left and right but eventually settled into the rough optimum position behind the tug. This was much harder to do than I realised. A couple of times Stewart assisted with some of my inputs (flying the Tandem required a bit of muscle, especially when it's getting out of shape!). But after a few minutes of this I started to suss it and relaxed which greatly helped!

Upon reaching 3,000 feet QFE (3,000 feet above the airfield) the tug pilot waves us off and after checking airspace I look down and operate the release lever. The looking down is to ensure that if the towline recoils, it hits the top of our helmets and not our faces - pretty sensible stuff. 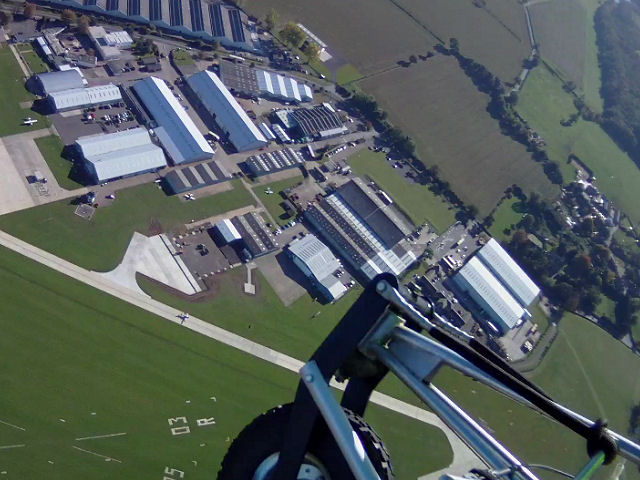 It's quite a novelty having an instructor by my side as we slowly descend. After some gentle boating around, Stewart asks, "is there something you want to try?". I was quite keen to have someone analyse my 360 degree turns so that's what we did. No problems there!

Still with plenty of height, Stewart suggests we do some stalls. Excellent I think, this is something I've not really done before, so what better time to try it? As I pushed the bar of the Tandem Target outwards things got quieter, but no stall. Pushing as far as I could, eventually the glider started to fill very mushy, then, very gently, the glider dipped slightly to the right followed by the nose gently dropping. This was the start of the stall to which I gently pulled the bar in to allow the glider to recover to trimmed flight.

I couldn't believe how much fun this was and when Stewart suggested that we were still high enough to do another, that's what I did. The second time, Stewart told me how interesting it was to watch how the sail ripples as the stall develops. Something that I thought was really interesting, but didn't actually see as I was deeply concentrating on looking ahead!

Of course, all this was happening in an active ATZ. Beneath us are active runways and Monday's are the quiet days, but as I looked down I could see aircraft landing and departing. Focussed on piloting the Target to the landing spot and under the guidance of Stewart, I used the constant aspect approach and gently landed very close to our chosen launch point. I will admit to having a huge grin across my face at this point! 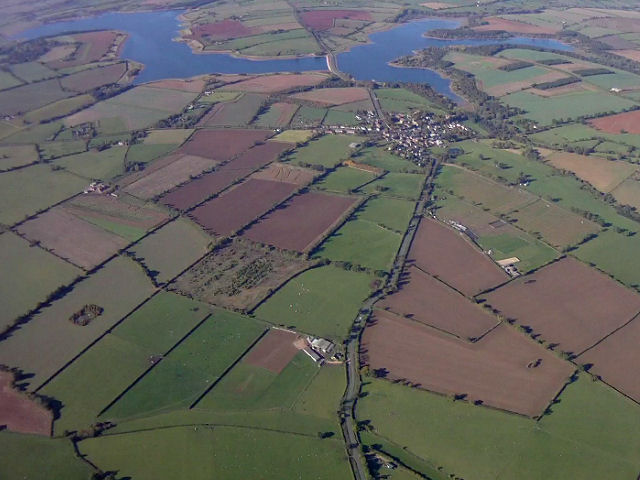 After debrief and a further flight by Will I was ready for my second dual flight. This time I would be flying the glider from launch through to landing. As before, I gave instructions to Will who relayed them via radio to the tug pilot. Takeoff again felt very fast and the Tandem quickly climbed above the tug. I pulled the bar in to cease the climb until eventually the tug lifted off. At around 100 feet above the ground, the tug was in position and I concentrated keeping the Tandem correctly orientated behind it. After several minutes into the flight the Tandem began turning further to the left than it should have and Stewart brought the glider back on course as we were approaching a lock-out position. After that 'blip', I was able to relax and comfortably fly the glider until signalled to release.

During the slow descent back to ground I experimented with some tighter turns. After two 360's and probably me saying something like "That was a tighter turn", Stewart responded with the words 'No, this is a tight turn' and with that threw the glider into a 60 degree banked turn and pushed out. The glider quickly rotated and everything was spinning very quickly! For the first time I really felt some significant G's being exerted on my body, a strangely fun sensation, but it got me thinking that the 200 kg load the glider was carrying had now increased to a 400 kg load! Hmmm! Perhaps that's why Stewart had asked if I had a parachute in my harness earlier? 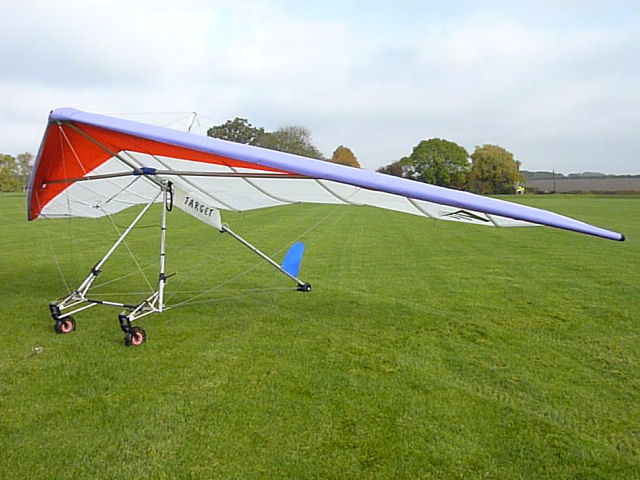 The Solo Target 16
An old friend, the Target 16 adapted for wheeled launches and landings. This is the glider both myself and Will would be using for our solo flights.
25 Oct 2010

After those moments of fun I was back in control and setting up my landing approach. Stewart asked if I wanted a further Tandem flight (I'd been warned earlier that there's an extra charge for these), to which I decided one more would probably be a good thing. Soloing the Target 16 was next on the agenda and another consistent takeoff and tow would satisfy myself I was ready for it.

After my third and final flight on the Tandem both Stewart and myself were satisfied that I was ready to solo. It was now time to meet an old friend, the Target 16. Like the Tandem, the Target 16 was also equipped with a full set of wheels. All launches and landings would be on wheels, a pretty good way to reduce the risk of damage to the gliders! 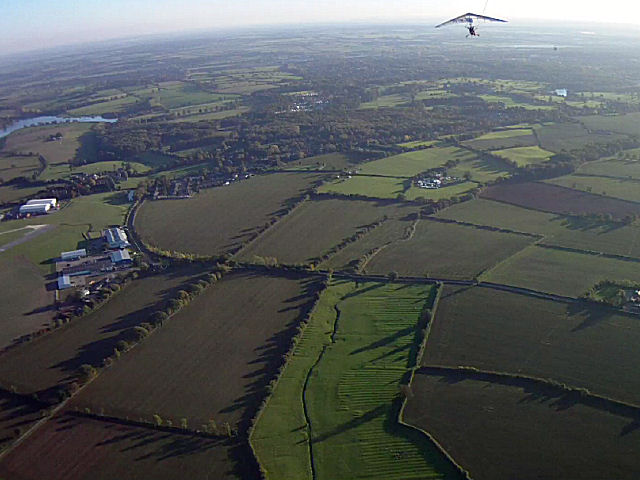 Following the Tug
Concentrating on keeping the tug in the 'sweet spot'.
25 Oct 2010

Compared to flying the Tandem, my first solo aerotow on the Target was much easier. Although my launch was in a slight cross wind I coped with it well. During the initial moments of the flight I developed some minor pitch oscillation with the tug but when I realised what was happening I relaxed more and stopped the 'over' corrections. 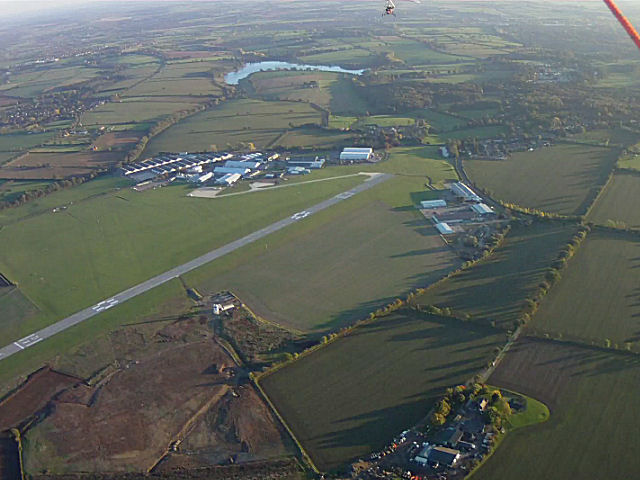 Sywell Airfield
Following the tug as it heads back to the airfield.
25 Oct 2010 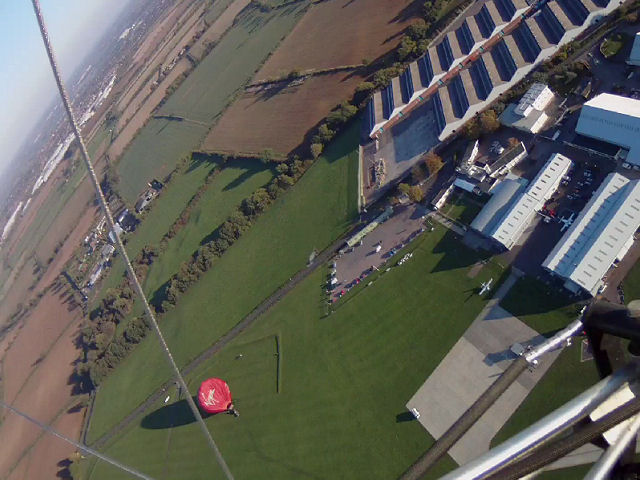 The Virgin!
Back over Sywell Airfield and a Balloon is preparing for a pleasure flight with a basket full of passengers.
25 Oct 2010

The conditions were perfect. Below in the airfield, a Virgin hot air balloon was being inflated. Next to it, were some very excited passengers, no doubt paying a premium fee for the experience, but I couldn't help thinking to myself I was getting a better deal! In the sky and slightly upwind of my current position was another hot air balloon. I had always wanted to fly with balloons and today I'd achieved that ambition. 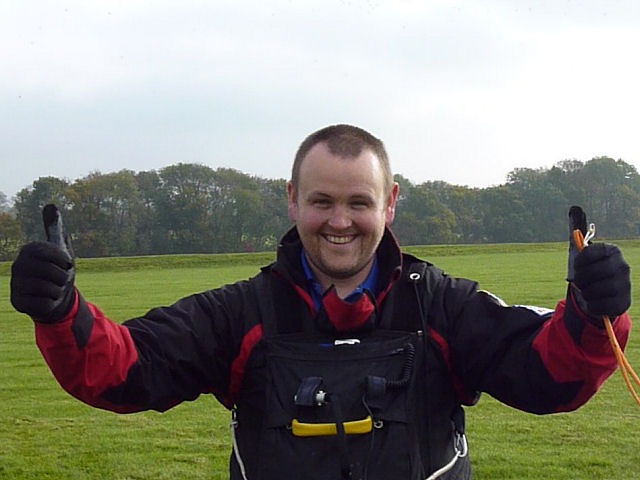 As I neared the ground I noticed that the Virgin balloon was acting like a huge windsock. Using this as a reference, I executed a large left hand circuit, again using the constant aspect approach taking me over the Sywell hangers and perimeter road where I lined up for my final and perfectly touched down just inside the airfield perimeter.

It was now getting late but there was time for one final solo. Stewart asked me to land the Target near the hanger (that would save hauling it back later). The flight went perfectly and I thoroughly enjoyed boating around above the airfield until it was time to land.

Back at the Flylight hanger Stewart and Cathy congratulated Will and myself on a successful day. Cathy even commented that it was very normal when flying the tug to look into the mirror and see the hang glider all over the sky, but today she had been surprised that we both kept the glider perfectly behind the tug (it must have been a result of all that static winching I thought!). 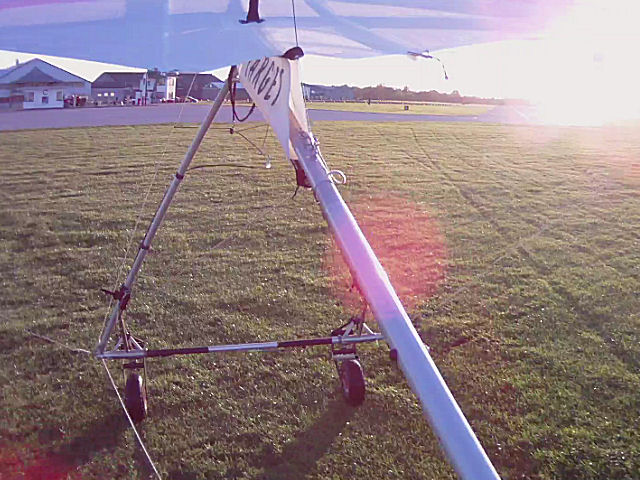 An old Friend
Back flying an Aeros Target, brings back some fond memories!
25 Oct 2010

Well that concluded the day, although we didn't complete the endorsement, Will and I had learned a lot and had a fantastic time. We would have to return soon to complete the course, so it was now a matter of waiting for suitable weather again, preferably on a Monday (the airfield's quietest day). 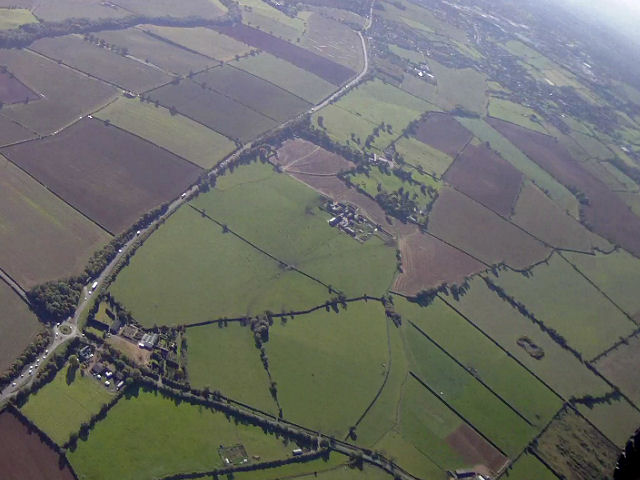