An Epic Day With a Not So Epic Landing!

The week that lead up to this weekend suggested two potential days of flying but as the weekend neared, the forecast wind strength was on the increase.

When I arrived at the Dyke I spotted Chris T already flying having just returned from Truleigh Hill. There were also other pilots readying their gliders; a refreshing sight to see the hill full of hang gliders! The wind was strong and blew from north of northwest. I quickly rigged and checked over my glider and was soon ready. Eager to get some more Dyke video footage, I attached my camera to my helmet and headed to the launch area. Nicos on his Aeros Target launched first and I quickly followed.

Probably due to the greater efficiency of the Sting (and not my piloting skills), I found myself at least 100 feet above Nicos as we both arrived on the north facing ridge, both headed towards Truleigh. Before I crossed the Pylons I topped up my height and while doing so, noticed Nicos had passed beneath me! It seemed to take forever to reach Truleigh Hill but I made it and arrived just above the top of the hill.

Truleigh Hill seemed to be working well and its bowl shape seemed to suck in all the little thermals that formed. For the first time during ridge soaring, I realised that the beeps coming from my vario signalled the presence of a thermal. As I had Truleigh Hill all to myself, I decided to practice some ridge thermalling and started a series of left hand 360s. I was able to keep the vario beeping throughout most of them but due to the wind drift had to leave the thermal to make it back to the front of the hill. Once back in ridge lift, I repeated the entire process. Soon I found myself over 1,000 feet above take-off and my continued 360s acted as beacon which attracted sail planes and hang gliders alike.

With the extra air traffic in the vicinity I headed East back towards the Dyke. I managed to lose all of my height gain in the process; however, just before I was back in the Dyke bowl, my vario squeaked and I connected with another thermal. Straight away I started a series of right hand 360s (Dyke rules) and this time something literally clicked in my head and I started to build a mental picture of where this thermal was. Getting carried away (pun intended) I drifted over the back with the thermal and reached an altitude of 1,220 feet above take-off. The thermal then seemed to fizzle out and when my vario beeped no more, I decided to glide back to the Dyke top landing. I pulled on my VG, pointed my toes and began an upwind glide back to the Paddock.

After what seemed like an eternity of gliding upwind, my height had been depleted and I realised there was a slim chance that I would have made it to the Paddock! The earthworks were just in front of me and it quickly dawned on me that if I continued on this track, I'd be landing in the ditch or just on top of the earthworks - both undesirable options! Unfortunately I had left alternatives too late and no longer had a safe get out! The only option that remained was to do a quick S turn to ensure I'd land behind but clear of the earthworks. Pulling on speed I set-up my landing then at around 10-15 feet above the ground I hit the inevitable rotor and crashed hard on the deck. After a quick self-diagnosis I realised I was okay, but when I looked at the left upright it had cleanly snapped in two. Damn! Oh well, that's what you get for being stupid! In hindsight I should have landed well back in the large field and dismissed the paddock landing option. I could have flown again if I'd done this, but having no spare upright with me concluded my flying for the day. 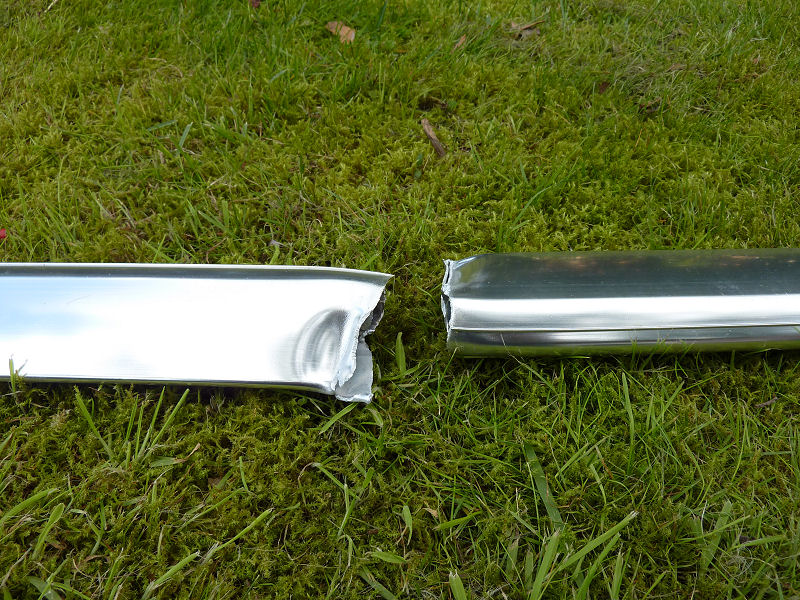 Clean Cut!
The upright cleanly snapped in two after my bad landing at the Devil's Dyke.
25 Sep 2010 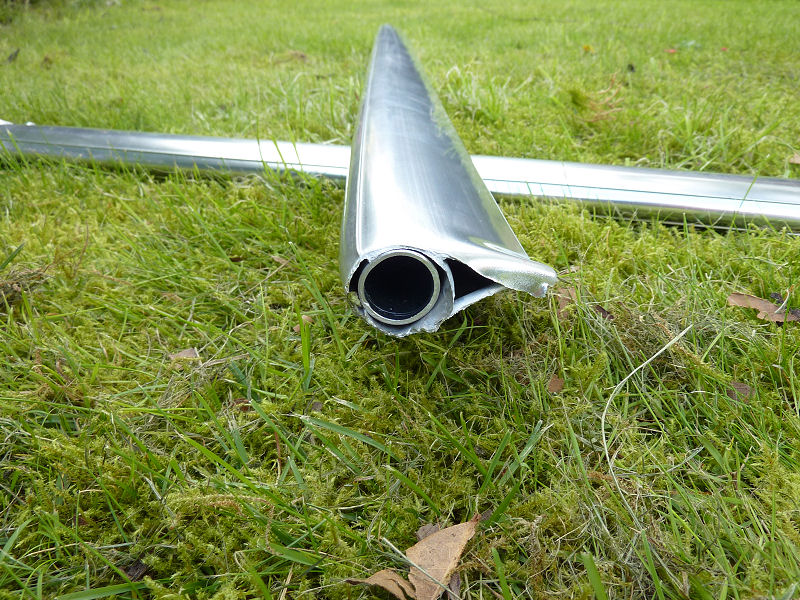 Snapped Upright
The snapped upright of the Sting 3:168. In this shot, the reinforced circular insert can be seen in place. Interestingly, the weak point is at the end of this insert!
25 Sep 2010

Devils Dyke
Video highlights of my marred flight at the Devil's Dyke that ended with a bit of a bump (and some snapped aluminium). Unfortunately, the battery on the Sanyo Xacti video camera let me down and didn't capture my landing/crash. Still, any landing that you can walk away from is said to be a good one - and I walked away without a scratch - I was just a little gutted for having made such a stupid mistake by landing downwind of the earthworks - of course there was going to be rotor there!!!