One of the advantages of working in Lewes is that I'm only a short hop from some of the best hang gliding sites on the South Downs. Today that site was Swanborough, so after a morning's work, I headed up there to fly. On arrival, the usual pilots were present. There was a haze in the sky that I hoped would later clear as the sun burnt it off. The wind was almost bang on from the east blowing at around 12-15 mph.

After rigging my glider, I was keen to get up into the air as it was getting busy. There were 3 rigid gliders in the air and all of them didn't appear to be that high. It wasn't long before I was airborne and I bumbled about the Swanborough bowl trying to eke out the best of the available lift. It was a battle to stay up. Back in the launch area, Paul was ready to fly Nicos' Aeros Target. I flew to the adjacent bowl to the north to give him room to launch. As soon as I entered the bowl, I knew this was a mistake and quickly hit sinking air. I struggled to gain height and eventually ended up creeping around the bowl to re-enter the main Swanborough Bowl. Both Paul and I were now flying in the same area with a very small window of lift. We were both very courteous to each other and each gave up the only lift. Subsequently this meant we both missed out and ended up bottom landing!

The day was still looked full of potential and with the haze burnt off and the sun shining, I returned to the top of the hill for another flight. The wind had also picked up, but I couldn't understand why no one else was flying - perhaps they were all flown out?

As I launched for the second time, the air certainly felt more buoyant and I was soon established high above those chatting on top of the hill. When my vario began to squeak at me, I realised that I had been rewarded with thermic conditions. Several times I climbed close to 1000ft above takeoff and explored the ridge northwards towards Kingston. After one more final climb and drifting over the back, I decided it was time to call it a day. After gently landing in the top landing field I packed up and returned home with a big smile on my face! 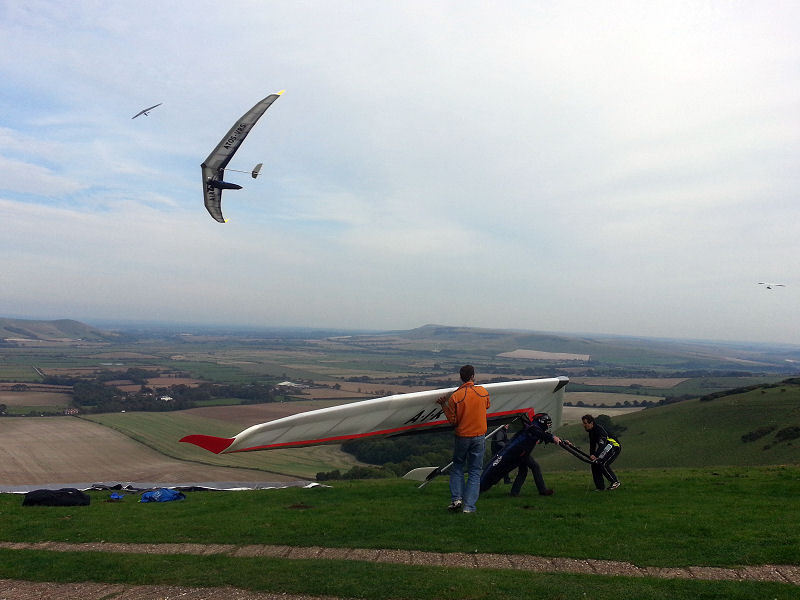 The Swanborough Launch Area
Preparing to launch a rigid glider as another buzzes overhead!
27 Sep 2013