2 months since my last flight and I'm back at the Devils Dyke hoping for a flight! The Devils Dyke web cam was consulted and it looked weak with a few floppies scratching around! I decided to head down anyway as the forecast looked like a repeat of yesterday.

On arrival all of the paragliders were grounded and the wind was perfect. I whipped the glider off the car, carried it to the paddock and rigged it. This time I had an extra device to add to the glider, my digital camera. Using a special hang glider mount that I purchased through Ebay I attached the camera to the base bar. I'd be hoping to get some aerial photographs for the first time! 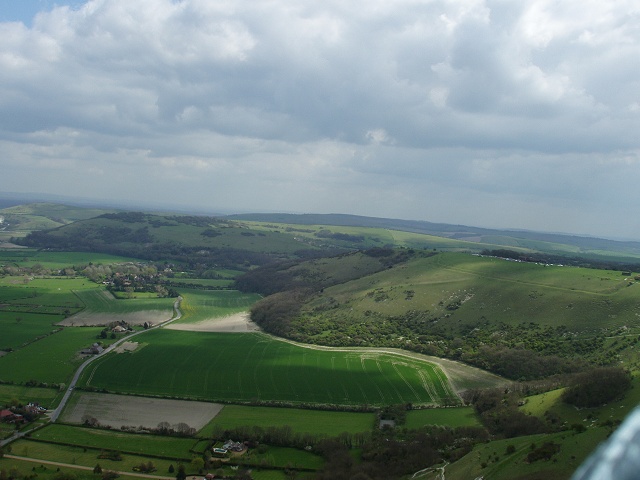 Hang Gliding at the Devil's Dyke
Part way along the ridge run to Truleigh looking back towards the Devils Dyke. You can see the cars parked along the top of the hill and the bottom landing field (in crop leaving a tiny space at the end for landing in). I'm probably just over 150 feet above the top of the hill when this photograph was taken.
29 Apr 2006

With the help of a fellow pilot I launched, turned left then cut across the bowl to the north-facing ridge as this was going to work best in the NNW wind. To my surprise the air was very buoyant but not too lifty. I scratched around between -50 and 265 feet above take-off. There was only one other pilot in the air with me giving me plenty of freedom to explore the lift band and the thermals that passed through. 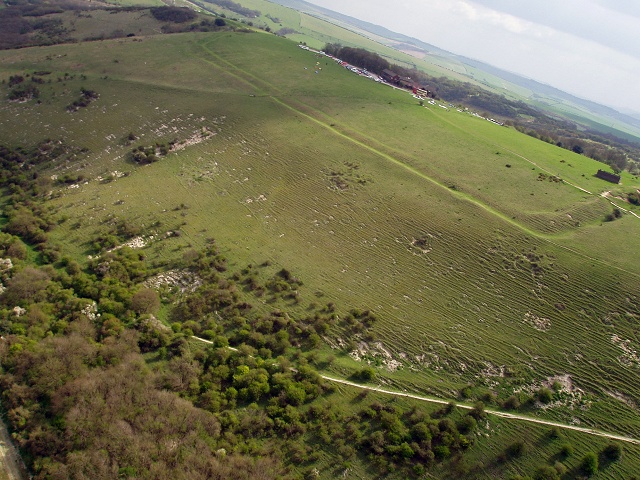 Hang Gliding at the Devil's Dyke
A bit closer and a bit lower to the Devils Dyke take off area! Here I'm banking the glider trying to get some height! You might just be able to make out other hang gliders rigged on the hill waiting to take-off. You can also see the chalk path that leads from the bottom landing field to the top of the hill (a path that I know well!).
29 Apr 2006

The whole flight was a mixture of in lift then out of lift. One or two times I thought I was destined for the bottom landing field but somehow, with plenty of concentration, I was able to find lift and recover. I was also able to relax enough to take some photographs. The best of which are below.

As usual, something never quite goes right and on this occasion it was my pod! I couldn't find the cord to zip my legs up so I spent most of the flight stretching out in the prone position. After 40 minutes of this my legs were numb so I opted to land. This time I was determined to top land. 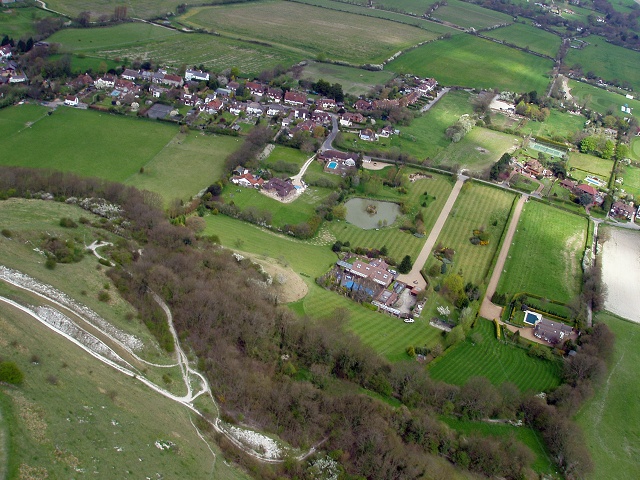 Hang Gliding at the Devil's Dyke
Here I am around 150 feet above the top of the hill or around 550 feet above the village of Fulking which can be clearly seen in this photograph!
29 Apr 2006

Crossing the bowl heading back to the take-off I was able to maintain height with thanks to a passing thermal. From the air the paddock always looks really small so I decided not to push my luck and headed for the huge landing field at the back. I was also aware that my glider doesn't penetrate very well against a strong headwind so wanted to maximise my chance for a successful top landing.

On a previous top landing attempt in this area I'd become victim of the rota generated by the fort, so I was adamant not to enter this danger zone and stayed well clear of it. This time I gently touched down. Perfect! 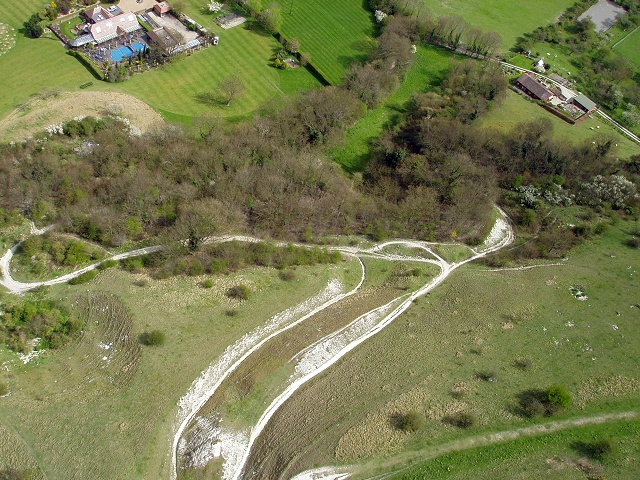 Hang Gliding at the Devil's Dyke
Last photograph, almost looking straight beneath me around 250 feet down (I was getting low again!).
29 Apr 2006