Between the Rain - It's Wales of Course!

Due to some luck and TomTom directing me in roughly the right direction, I arrived at the entrance to Bryncaws Farm at 10:30 am. Not bad considering I was in Sussex 4 hours earlier! Whilst waiting for the rest of the team from Suffolk to arrive, I met Norris, a local pilot who'd just returned from the top of the hill bringing the bad news that launch was blown out and that he was heading off.

A short while later Andy arrived shortly followed by Paul, Will, Said, Keith and John. Norris then returned thinking that if other hang glider pilots were on the hill he'd have a better chance of flying his Target. It was just as well Norris returned as his directions up to launch proved very useful - if only a bit of a challenge for my new car (I bottomed out a few times - perhaps I should have gone for a 4x4!). 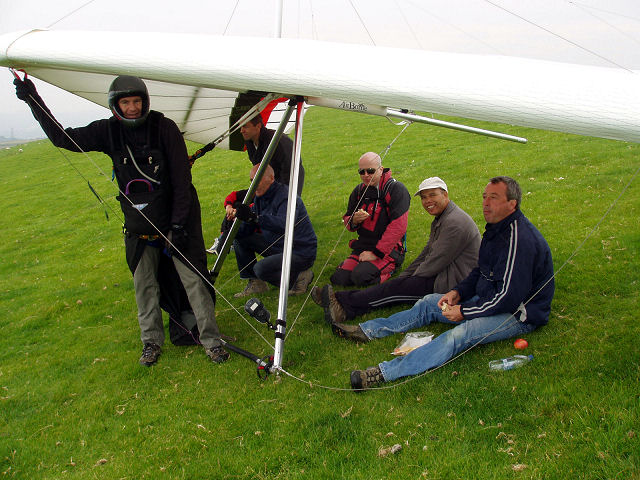 Rain Shelter
An expensive rain shelter at Bryncaws - the Welsh weather descends as Dan was considering launching and everyone gathers under his glider to shelter from the rain.
4 Sep 2010

At launch we were all disappointed with the weak conditions. After rigging a few paragliders arrived and launched. We watched them fly for a while and were surprised that they were barely able to maintain launch height. Slope landings being a clear advantage of the paraglider today!

Paul and I both rigged and clipped in ready to launch, patiently waiting for another 5 mph of additional wind speed. Eventually, things took a turn for the worse; visibility dropped and rain began to fall. As I was still rigged and clipped in, it didn't take long before everyone sheltered from the increasing rain intensity under my wing (see photo). 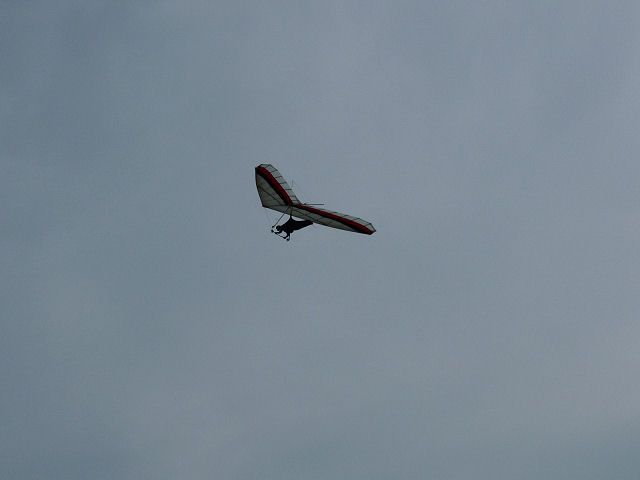 Dan Flying Bryncaws
Dan finally gets off the ground and fly's Bryncaws on his AirBorne Sting 3.
4 Sep 2010

Later, as the rain began to weaken, one of the paraglider pilots wandered up to us, pointed to the windsock and said, "It's now sea breezed and that's the end of the day for this site". The windsock was clearly showing a southerly wind blowing 90 degrees from launch direction. With that the remaining paraglider pilots packed up and departed. 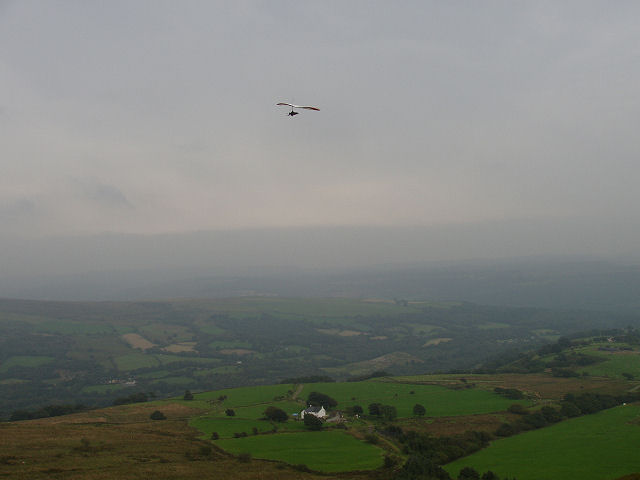 Dan Flying Bryncaws
Dan finally gets off the ground and fly's Bryncaws on his AirBorne Sting 3.
4 Sep 2010

I personally wasn't so sure about the sea breeze theory - there had been no sun and it was totally overcast, hardly the right conditions for a sea breeze to develop. Speaking to Paul I suggested that perhaps the heavy shower that was passing overhead was affecting the wind direction and perhaps we'd be better off sitting it out. Paul concurred.

About 30 minutes later as the rain stopped the wind indeed did come back onto launch and this time it felt a little stronger and consistent. Paul and I were now queuing at launch. Paul being in front was first to go. We all watched as he soared back and forth trying to gain height on each beat. It was very obvious that the lift band was narrow and with such a small section of the ridge working, there wasn't going to be much room either!

Being ready to launch I needed to time my launch when the wind felt good and when Paul could easily see me. As I waited Cara relayed me useful instructions of Paul's whereabouts. When he was clear I launched and immediately turned to my left. Scratching in as close to the hill as I dared, I made little height gain on my first beat. As I turned 180 degrees to head back the other way I started scanning the sky for Paul. I couldn't see him anywhere; this I didn't like, especially on such a small site with a minimal lift band. 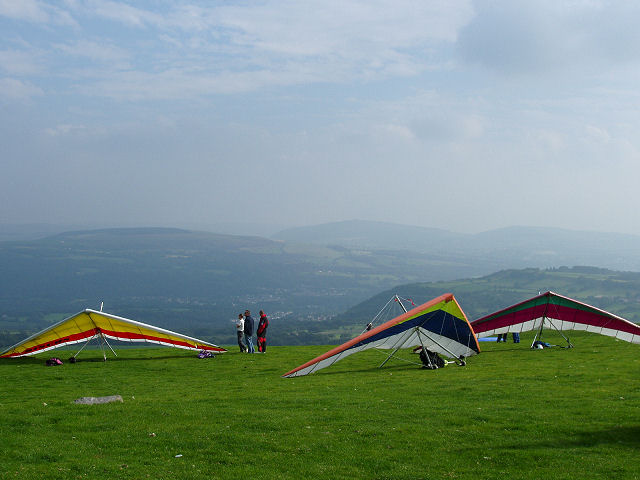 The Sun Emerges
After Dan's flight and top landing at Bryncaws, the sun finally breaks through and everyone gets a good flight in.
4 Sep 2010

As I reached the other end of the ridge and reversed my direction I noticed that Paul had top landed. With that knowledge I felt a little more confident concentrating on gaining height and continued to beat back and forth with that intention.

After some minutes of not particularly enjoyable ridge scratching I looked down at launch and spotted Keith W in launch position. The air was lumpy and murky and not particularly enjoyable, so I decided as soon as I was high enough I'd try to top land and clear the sky for Keith. As usual I checked my vario/altimeter as I use this to judge when I'm sufficiently high for a top landing approach. Unfortunately, after I switched it back on after the earlier rain shower I'd forgotten to zero it, it was reading 1,200 feet and I knew I wasn't that high! I guess it was for the best; I really need to rely on my own judgment rather than that of an instrument!

On my final turn at the northern and highest end of the ridge I connected with some lift and continued to do so as started my next southwards beat. As you head south the hill drops so I decided that a landing approach starting from the south heading northwards, would be the best option for top landing - the ground comes up to met you as you descend towards it, very much like Bo Peep in East Sussex. The top of the north end of the ridge also has the flattest bit of ground, so that was my preferred landing zone.

Doing my final beat, I extended my turn so I'd head across to my chosen top landing area. I pulled the bar in for additional airspeed, a contingency should I encounter an unexpected wind gradient. I then flew across the rigging area, towards the back of the field and to my target landing area. As I turned back into wind I slowly started sinking, spooking a few sheep as I descended. To my surprise I wasn't coming down as quickly as expected and the edge of the hill was rapidly approaching! Fearing an overshoot, I placed my left hand back on the base bar and pulled in as far as I could. The glider responded by dropping quicker and I was able to get my feet on the ground. However, I was still carrying plenty of airspeed, but using the wet grass I was able to skid along slowing down until able to run the last few steps before the glider came to rest (well I skidded through something!!). 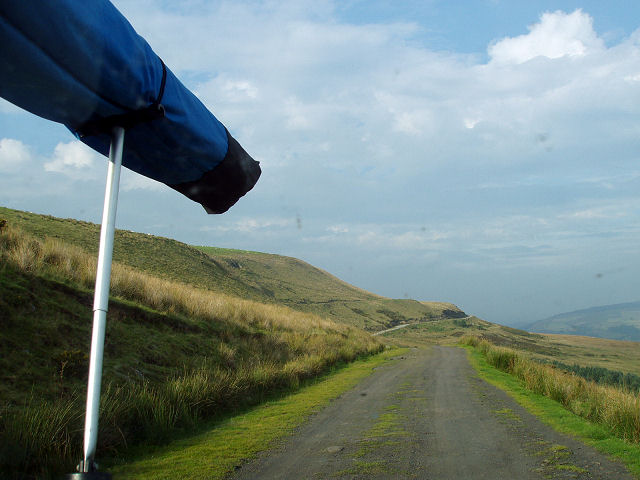 Driving Down Bryncaws
After a damp afternoon flying, Dan drives down the mountain to collect a pilot that has landed in the bottom landing field.
4 Sep 2010

That concluded my flying for the day. As the day progressed the sun broke through and conditions improved. Eventually, with a one pilot in the air at any one-time impromptu rule, everyone else had some short flights until local paraglider pilots joined us affectively closing the tight airspace down to hang gliders.

Finally, as I descend the hill very carefully in my car, I stopped off at the bottom landing field to say hi to Will (he'd landed there earlier) and to pay the £2 site fee to the local farmer. 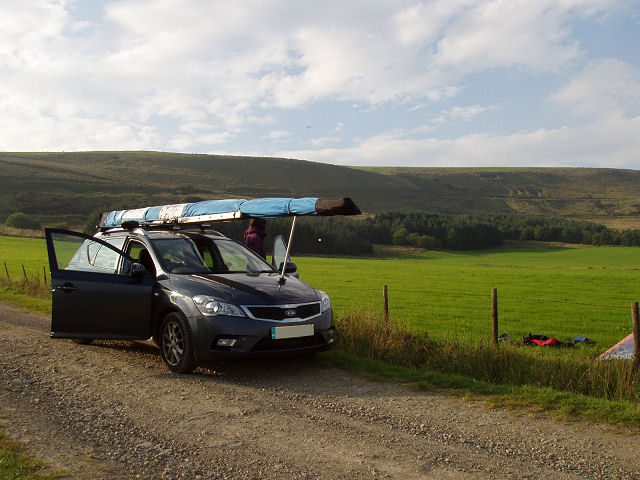 Bryncaws Bottom Landing
The Bryncaws bottom landing field; which strangely, is still on top of the valley!
4 Sep 2010

Bryncaws - SW Wales
Personal video log of my short soaring flight at Bryncaws, South West Wales - in between all the rain showers!