Mud and Flying at Bo Peep

Well this day turned out to be an unexpected surprise! Thanks to Kevin's earlier phone call letting me know that Bo Peep was on and that it was too windy for paragliders, I arrived early afternoon to see one lone hang glider flying and a few more rigging.

The Bo Peep, SHGC car park was another story. Winter had taken its toll and it was a mud bath. Driving my car in and parking up, I couldn't help to think that this may have been a mistake!

Sometime later I was rigged and ready to go. For the wind strength, the air didn't look particularly buoyant. Launch went well and I turned east and headed for the main bowl. There was definitely lift to be had, but it was quickly accompanied by sink so the entire flight required concentration to stay up.

The wind now appeared to be dropping off and the tell tail signs of paraglider canopies being laid out below me confirmed this. I concluded it was time to land. I headed towards the quarry, then turned away from the hill and crabbed my way across the top landing field until I eventually touched down at the summit.

After walking my glider back to launch, I caught up with some fellow pilots and watched as the sky filled with more and more paragliders. Perhaps that was it for today? No, the wind picked up again and with that I returned to my glider (see inset picture taken by Andrew) for a second flight. 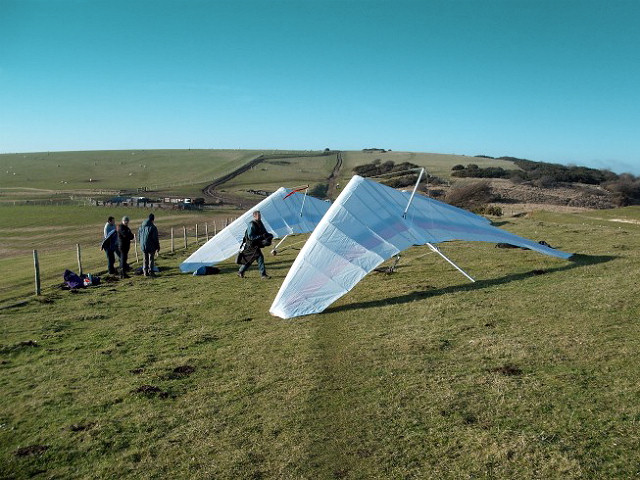 Readying for Launch
Dan returning to his AirBorne Sting 3:168 for his second launch. Photo by Andrew E. (pinched from the SHGC website).
6 Feb 2010

My second launch was uneventful and as before, I headed to the main bowl as this appeared to be working well. The sky was much busier this time with 4 hang gliders and upwards of 5 paragliders (one of which was a Tandem). After another 25 minutes it felt increasingly more and more like I was battling to stay aloft. The wind also felt like it had more of a northerly in it, so this time I started my top landing approach by crabbing across the bowl heading in a westerly direction. The approach was far better than my last and I softly touched down at the hill summit.

After packing up I returned to my car, loaded up and attempted to drive home! Fat chance! I was well and truly stuck, the front wheels simply had nothing to grip on! Fortunately, the paraglider pilots chilling out in their van took sympathy on me and pushed me free!