This weekend is Boot Camp weekend, the Suffolk Coastal Floaters training weekend, the aim of which is to train new winch operators and club coaches, the life-blood of the club! All they need now is some winch fodder, aka; pilots to be winched, so that's my role for this weekend sorted!

I arrived at Mendlesham airfield a little later than planned - the crash on the M25 being the cause, but arrived just in time to see everyone heading off to Metfield in Norfolk, the club's alternative but rarely used winching site. I had previously programmed all the site locations into my TomTom, so hopefully blindly following this would get me there. Wrong, my POI was in the correct place, but TomTom just didn't quite know how to get to it. Note to brain, revise Metfield POI!

After much debating about weather and wind direction, the winch was set-up and the lines pulled out. The wind was pretty blustery and at one point, one glider launched without pilot. Fortunately, it was grabbed and returned to safety before damaged was inflicted!

As the morning progressed my turn to winch came around. The club was holding two competitions, spot landing (the pilot who do a controlled landing nearest the designated spot), and duration (the pilot that could stay up the longest). I didn't really fancy my chances but I try my best! The spot was positioned several yards behind the launch area, an area I guessed would be subject to some rotor due to the large mound of soil upwind from it.

Soon it was time for my first tow. The wind was gusty, so timing the correct time to launch was pretty important. It may be all my hill launched experience but launching didn't appear to be too much of a problem. The tow up was bumpy but within my comfort zone. However, upon landing, I did get bumped around a little so pulling extra speed on gave me a little more margin for error. I concluded the bumps were due to rotor from the before mentioned mound of earth.

Launch number two was almost a replay of launch 1 however, my landing was a little closer to the spot - a grand total of 7 paces. This would put me in the lead for most of the day!

After two successful launches the gusty conditions were getting worse, so the decision was made to cease winching operations until it calmed down a little. Whilst we waited for conditions to calm I began to devise a way of attaching my little video camera to my helmet. This was achieved using generous lengths of insulation tape! Shortly later the conditions calmed and winching recommenced.

My remaining tows were all pretty similar, some slightly prolonger by turning in some rising bits of air, but nothing significant. The spot had been relocated upwind of the earth mound after a not so pretty landing by one pilot, ending his flying for the rest of the day. Needless to say, I wasn't able to improve upon my spot landing result and I was eventually reduced to second when Keith landed 2 paces from it! Nice!

The day concluded with a visit to the Duke pub in Metfield for a drink and bite to eat before we eventually returned to Mendlesham to set-up camp. 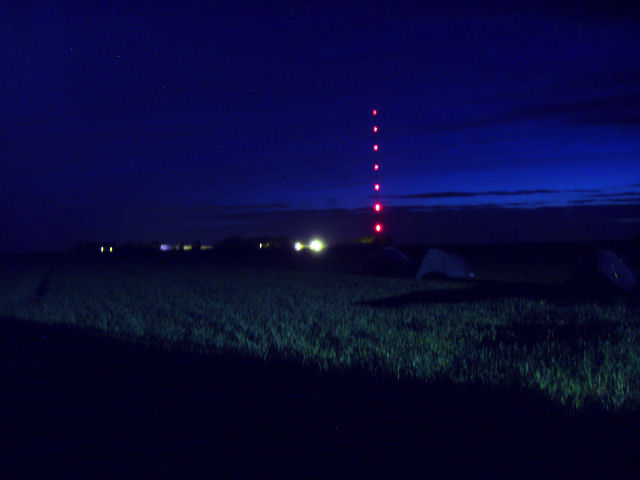 Camping at Mendlesham
After a day of flying at Mendlesham my tent gets rigged on the runway for a nights sleep before resuming flying the following day. The navigation lights of the Mendlesham transmitter can be seen in the background.
9 May 2009