Is Aerotowing a dying art of hang gliding? The Southern Aerotow Group has struggled over the last two years to gain momentum, in part due to an aging tug fraught with problems, a not so ideal flying site and diminishing numbers attending the infrequent flying days. Nationwide I learned of the demise of the Notts Aerotow Club and Flylight (where I had gained my Tow endorsement) ceasing aerotow training. When John Birchall published intent for Aerotowing for the 18 June and with myself becoming increasingly frustrated not being able to get out to fly, I signed up. I was rusty, having not aerotowed in over 2 years; not current and having not aerotowed my Wills Wing U2 and had never aerotowed with the Aeros Myth harness. There were lots of new variables for consideration that I would make known to the coach on the day.

I arrived at Plumpton nice and early although I hadn't realised the London to Brighton bike ride was in progress. My early set-off and arrival at the aerotow field meant the road closures didn't really hold me up.

I wasn't first to arrive; Steve Marnier had already begun to open up when everyone else began to arrive (John Birchall, Jody, Paul Leary, Nigel then later in the day Ozzy and Johnny Carr). To say it was hot was an understatement. By mid-morning conditions were light Southerly winds with wispy cumulus clouds forming and by mid-afternoon, the wind had developed into a gentle sea breeze.

Steve Marnier gave a full briefing followed by the commencement of towing operations. I was nervous and following advice from Paul Leary, decided to take one of the early tows to get it over and done with. I was assisted into the launch trolley and when all checks had been completed and with the VG setting on the glider set to one third, I started my tow. As my glider left the trolley it immediately began to turn off-line towards the right. I over corrected and a yaw oscillation developed. Once well clear of the ground, the amplitude and severity of the oscillation was reduced, but at 1,000 feet, after hitting some rough air, the oscillations began again and when I observed the tug dive and turn slightly to the right while I was headed off to the left, I released. The sound of rushing air then ceased and with the tug headed back to launch I became more relaxed and began to seek out rising air to prolong my flight after my premature release. 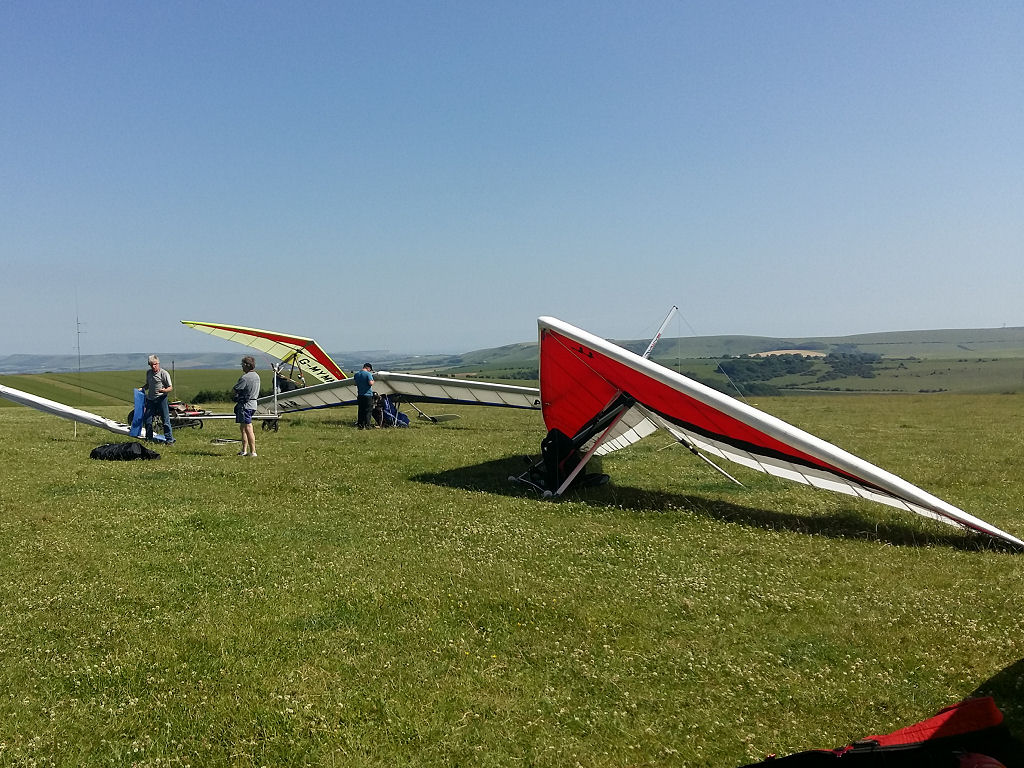 I found a weak climb over Ditchling Beacon and slowly 360'd and climbed a further 400ft. Below, the London to Brighton cycle event was well underway and the sound of the supporters propagated up to my position. I continued to explore lift, circling above the crowds below but slowly sank downward. When I was 600ft above the ground I decided to head back to the launch field. To the west of the launch field is a small dry valley which I flew over as I commenced my downwind leg. At 300ft above take-off a small thermal that must have rolled up this valley, popped off the ground into the air. I was able to exploit this for 5 to 6 360's and climbed 150-200ft in it before I lost it. Thereafter, I returned to the field and did an up-hill landing on the side of this valley which left me with a short but very hot walk back up the hill to launch.

After I had cooled down and re-hydrated (did I say it was hot?); I assisted a few others to launch then procrastinated if I would fly again. My earlier yaw oscillations had unnerved me! By 3pm the sea breeze was established and I decided this would be perfect conditions for a second tow. Thermal activity was now supressed by the sea air so a tow would be in smooth air, perfect for me to hone those rusty skills!

By 3:30pm I was once again positioned on the launch trolley. Earlier I had discussed VG settings with Paul Leary and Ozzie, so for this flight, I set the VG to two thirds; Paul's view was this would dampen my roll inputs and possibly help suppress those dreaded yaw oscillations from developing. 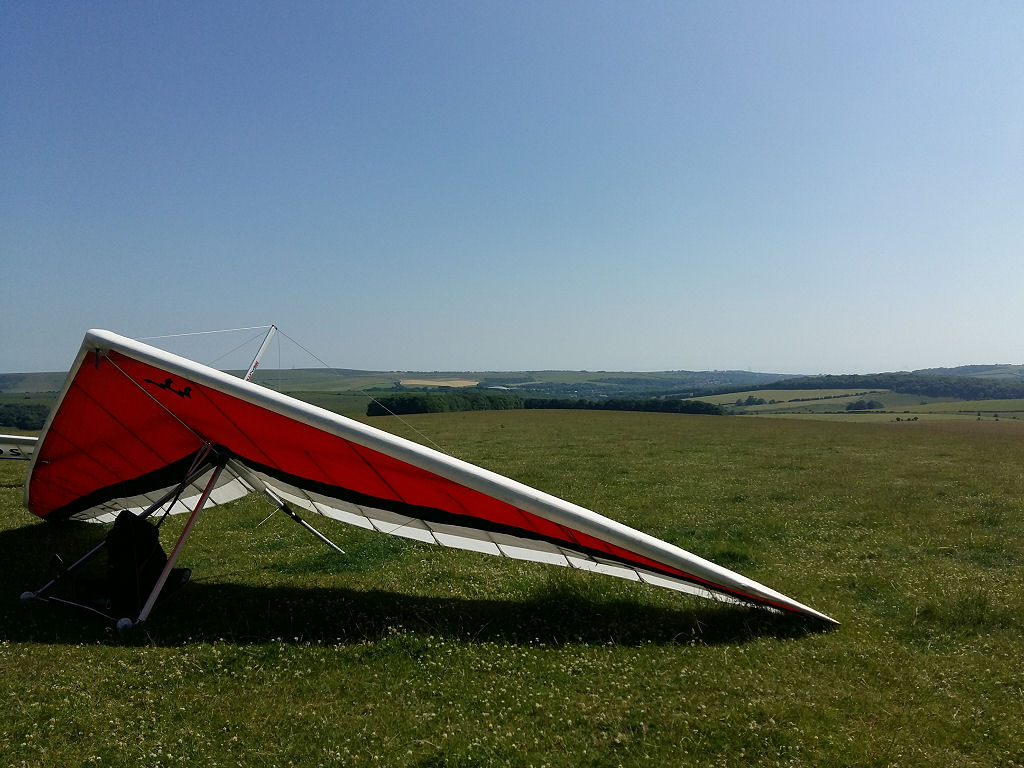 My Glider
My glider at the Plumpton Aerotow Field with the Amex Stadium and Brighton Uni in the background.
18 Jun 2017

The tow commenced well and I popped off the trolley with ease. I pulled the bar in and swooped down a little faster than I expected and positioned myself behind the tug while it built up enough airspeed to leave the ground. I was once again aware that a slight yaw oscillation had developed but with some more refined control inputs, a very understanding tug pilot and my knees forward, I was able to control the oscillation and the glider settled into a smooth tow.

The air was perfectly smooth and the tow up seemed to go on forever (Nigel later confirmed he was climbing at a reduced rate to give me the best chance of getting up). I welcomed the cooler air associated with the higher altitude and with my concentration completely on the tug, I became a little disorientated. The air had also become hazy so I had concluded I was getting pretty high. Nigel waved me off and I released safely. A quick glance at my vario confirmed I had reached 2,094ft above take-off.

I hadn't expected to find any rising air, but again over Ditchling Beacon, I found myself not climbing but able to maintain my height (the air rose at the same rate I sank). I gently 360'd in this air before I slowly lost this weak lift and returned to the airfield where I successfully landed. I was happy with that; I still need to practice the art of aerotowing, but that was a good place to leave it for the day.

Is aerotowing a dying art? Possibly - it does not appear to attract the number of pilots it probably needs to be sustained. In my opinion it would be a real shame if it were lost! A hang glider pilot on the South Downs has limited flying options for certain wind directions or is put-off from flying due to crowds flying the local sites. Aerotowing provides a viable alternative, but does need the support and commitment of many others to make it happen; perhaps this is why there are difficulties compared to the solitary nature of a hang glider pilot flying our local hills. Going forwards, I am committed to this discipline of this awesome sport!