The anticipation to flying Saturday had built up through the week. The Suffolk Club's fun competition had been cancelled due to high winds and myself; like everyone else, had assumed that Firle was going to be an epic day! Sadly, the reality didn't quite meet the expectations!

I had arrived mid-morning and expected to see the ridge full of hang gliders soaring the skies. Instead, one recently qualified CP student was about to launch (with assistance from Luke and other helpful pilots) and everyone else was going about their rigging rituals.

As the morning progressed various pilots were tempted into the air (mostly the rigids) and at some point, all struggled to stay up and had to scratch around efficiently on the ridge or dart in for a top landing when high enough. There were thermals about and if you could hook one and stay with it, you'd be rewarded. James C. and Taka proved this and eventually more of the flex wings were tempted to leave the ground.

The first shock of the day was Nicos going down on his rigid then a little later, Luke in a field below Firle Beacon. At this point I concluded that most of the other pilots had resigned the thought of flying. Myself, well, sod it, if I'd rigged my glider I was going to give it a go - even if a bottom landing was likely (and I was pretty sure it was), it would be good practice! 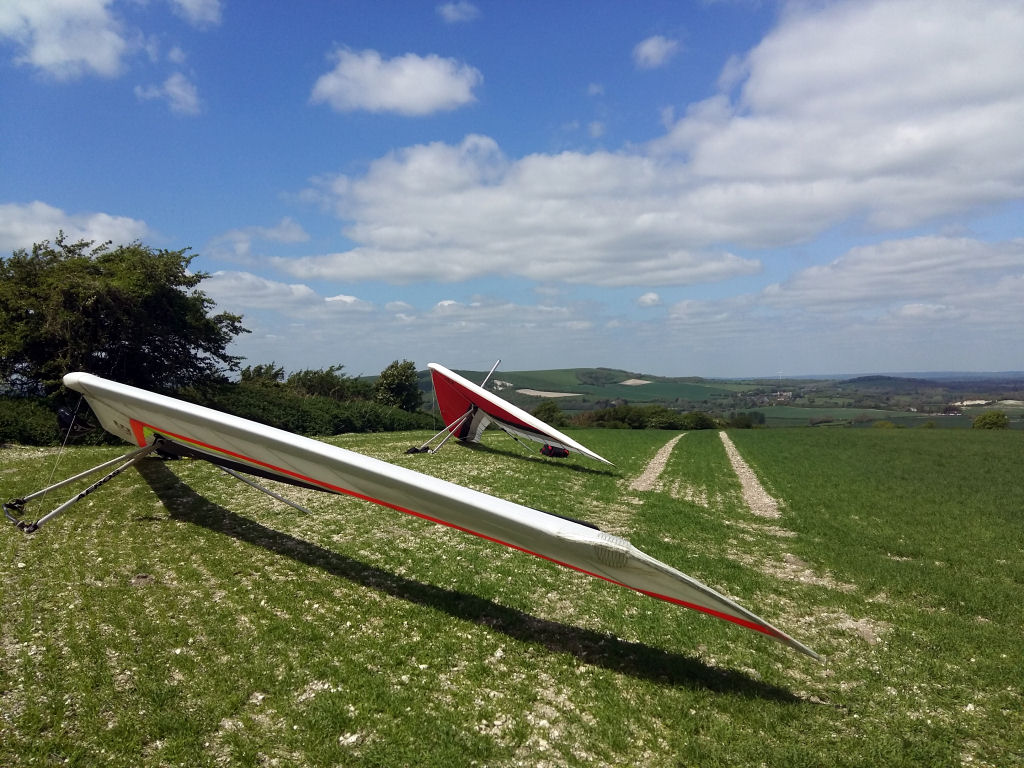 Bottom Landing at Firle
Dan and Nico's gliders at the bottom landing in Firle after succumbing to gravity and the difficult soaring conditions of the day.
14 May 2016

The wind appeared to be pretty brisk and I struggled for a short time to keep my glider on the ground as I made my way to a suitable launch spot. Flex wings already airborne in the next bowl west of launch, circled and appeared to be climbing. I watched them eagerly and noted the pilots that waited on launch, didn't look like they were going to launch in the immediate future. I decided I may as well give it a go and set off into the sky.

I probably flew a little too far out from the ridge initially and soon connected with some lift on the western edge of the bowl. When I reversed my turn I quickly sank back to ridge height. I normally like a few moments (read that as minutes) to settle into flying my glider, but today, for any chance of staying aloft, every moment and every decision was critical; especially when at ridge height or just below it which is where I had found myself!

I reversed my turn a second time and this time was rewarded with a high pitched squeak from my vario and my glider surged upwards. In hindsight I should have quickly executed a tight 360 to stay with this, but I was hardly above the ridge and didn't feel confident in doing this safely. I had also noticed that the far more competent and experienced hang glider pilots already airborne had spotted my thermal and descended on me like vultures on fallen prey. With traffic and geography to contend with, I relinquished my thermal which set me on a slow and gradual path to an inevitable bottom landing!

As I slowly fell below the ridge my glider's wing was tipped abruptly and I was turned towards the hill. It required a significant weight shift to bring the glider back around and as it did, I remember thinking to myself that there was some significant lift to be had and if you could get up, you'd probably stay up! I had failed in the initial part of that statement!

My trip to the bottom landing field was a prolonged one and I was surprised by how many beats back and forth I executed before I had to turn away from the ridge to set up my bottom landing - which today would be down the middle of the field (I had considered an uphill landing on the side of the field but dismissed this in favor of a lower risk landing). 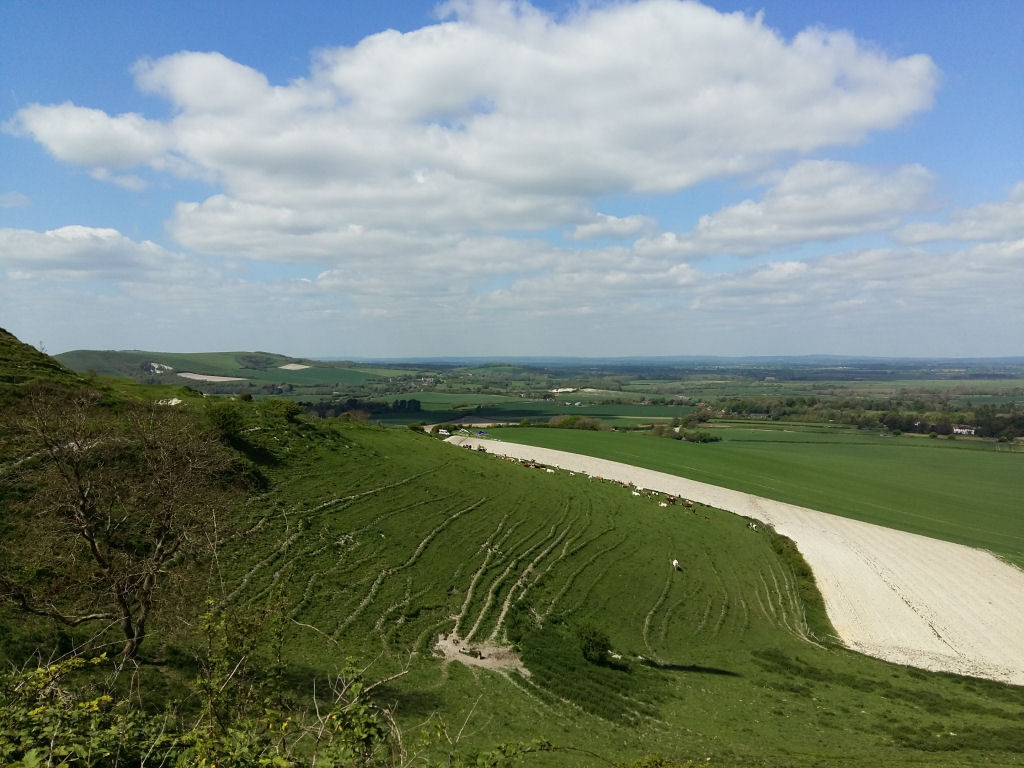 Bottom Landing at Firle
On the road back to the top of Firle to collect his car, Dan takes this photo looking back at the collection of gliders at Firle's bottom landing rigging area.
14 May 2016

In typical fashion, as I moved onto the uprights ready for landing, a booming thermal kicked off and again, I felt the glider surge upwards. For a very brief moment I considered doing something with it, but I must have been no more than 20 feet above the ground so erred on the side of caution and continued with my landing and simply pulled on more speed ready to encounter any sink that followed the thermal. There was, and I descended the last 10 feet rapidly and was kicked to the left in the process. Fortunately, I was able to nudge the glider back on course and gently touched down with a last minute flare! 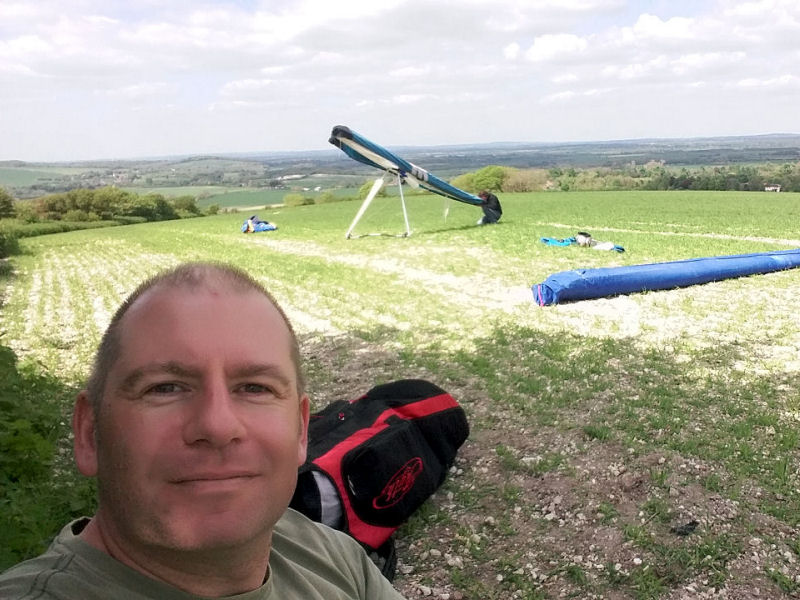 Selfie
Dan takes a selfie at the bottom landing at Firle.
14 May 2016

After carrying my glider up the hill and to the side of the field (where I found Nicos' glider); others began to join me. It was pretty productive in the bottom landing field as I derigged my U2 on the A-frame and managed to squeeze it into a recently repaired XC bag that I had previously purchased for my Sting 3.

After I packed up I had to leave Firle due to family commitments; this regrettably meant missing Nicos' BBQ on top of Firle at the end of the day. I did however have just enough time to stop off at the bottom of Caburn, park the car and climb to the Caburn launch with a view of one day carrying my glider up with the intention to fly it. It would certainly be hard work but doable! 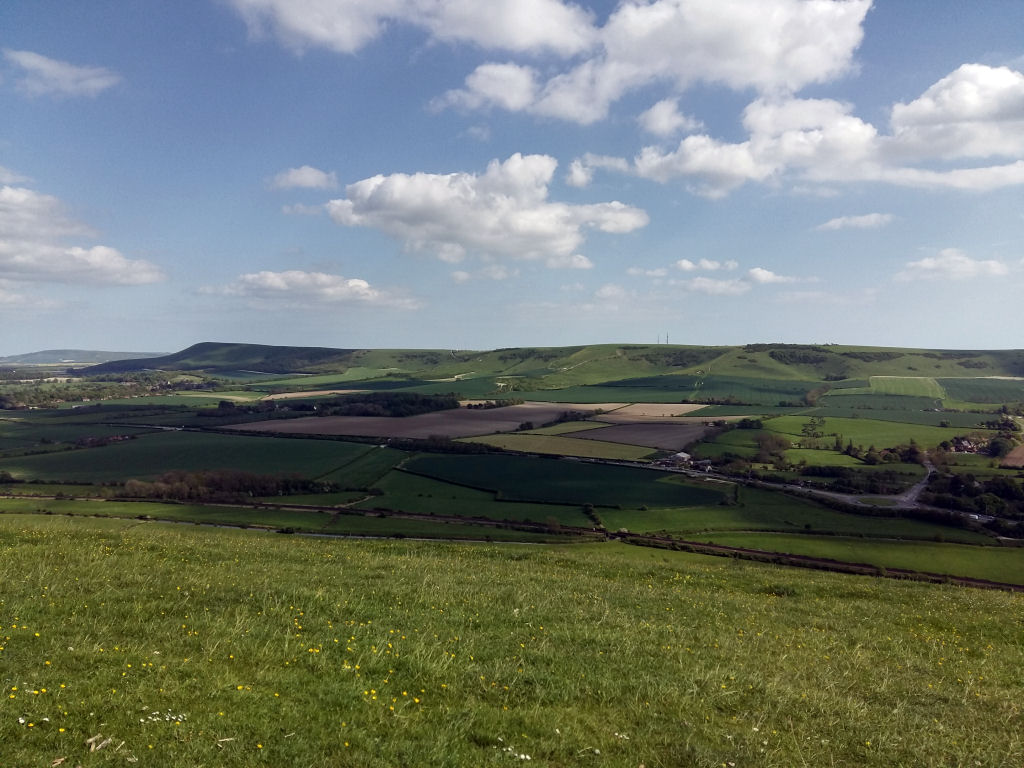 View from Mount Caburn
A view from the top of Mount Caburn looking towards Firle and Beddingham.
14 May 2016