Sunday's winds had been forecast to be slightly lighter than Saturday's but still at the top end! My thinking was at least there wouldn't be any paragliders present so I was happy to visit the Devil's Dyke with intent to fly. 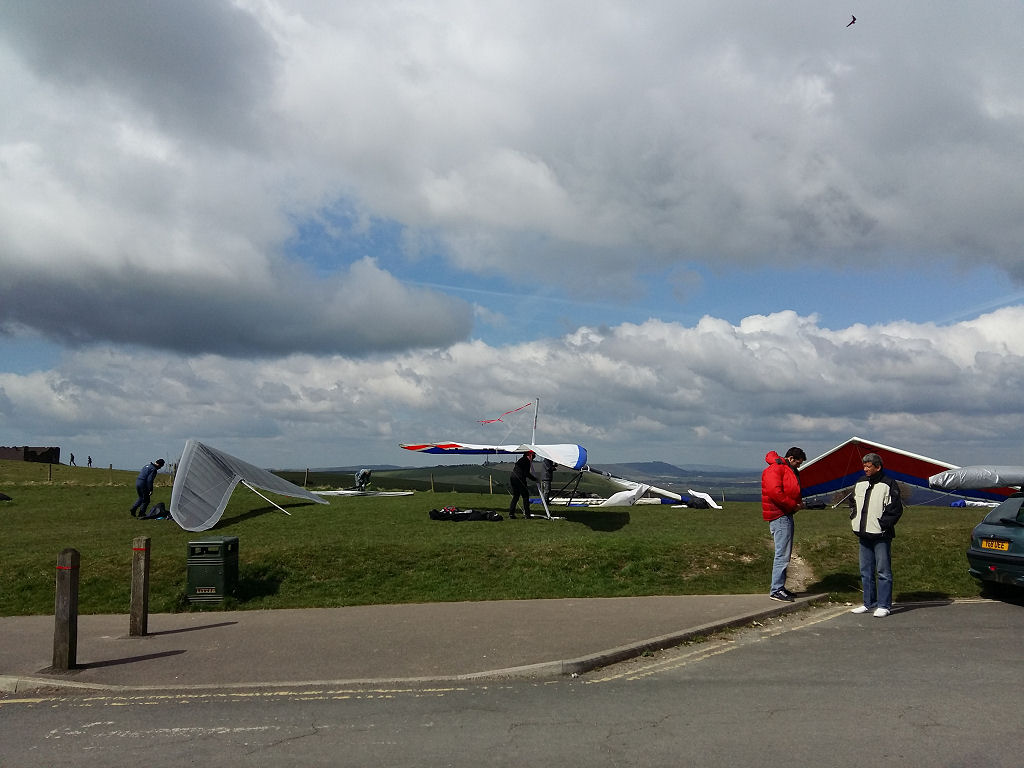 Devil's Dyke
Everyone arriving at the Devil's Dyke waiting for the 'first' person to launch.
24 Apr 2016

When I arrived Ian W. was already airborne, Johnny C. was rigging and others had just arrived. It wasn't long before my glider was rigged but having done so at the back of the field, and with other pilots now rigging their gliders in front of me, my route to take-off was blocked with gliders at various levels of assembly.

When I was ready, Johnny C. had taken off and although I didn't see it, those that did, said he hit some horrible air just as he left the ground. As I waited for a path to launch to clear, I was surprised that no one else had launched or was hinting at doing so. I asked a couple of pilots why, and they all replied; 'It's too cold!'. My suspicions were they were all waiting for someone else to launch first (a suitable wind dummy)! Turns out, that would be me!

With the assistance of other pilots, I wiggled and weaved my glider around all the other gliders until I was at the front of the hill. John B. assisted on the nose and when I felt the conditions settle a little, I launched with a strong committed run and pulled the bar in before I left the ground to maximise on airspeed - this was my contingency should I hit some horrible air like Johnny had earlier. Needless to say, it was uneventful and I was quickly in the air and headed for the bowl which I assumed would be focussing the northerly wind. 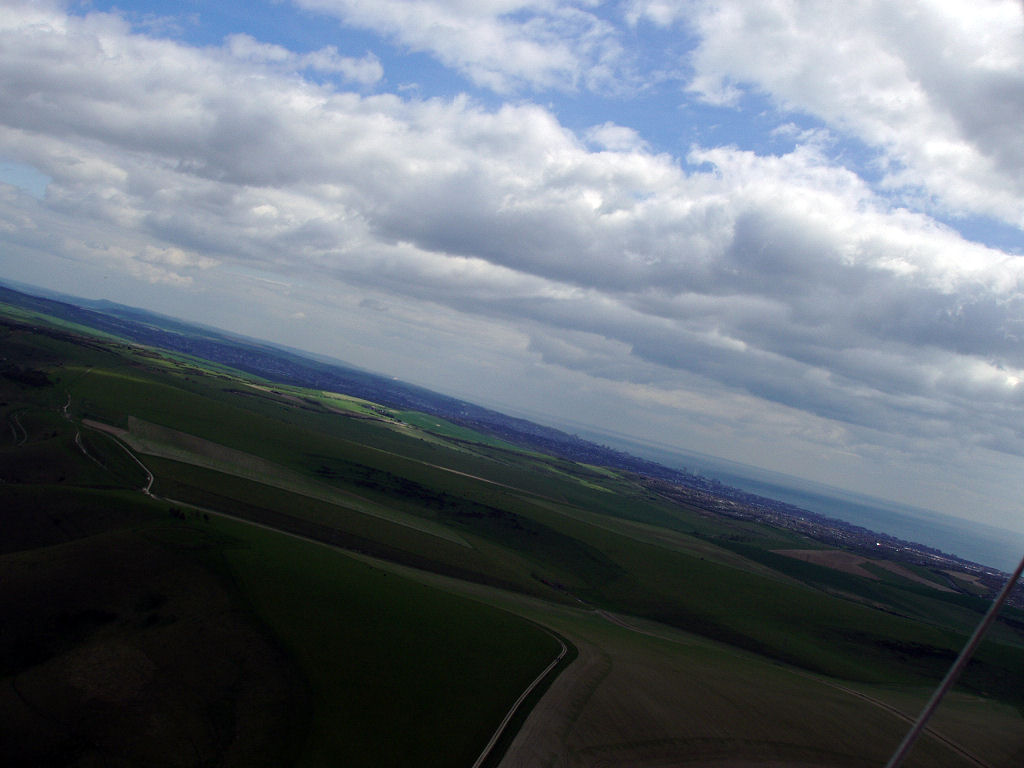 Truleigh Run
On the Truleigh Run and a view over the back towards Brighton.
24 Apr 2016

For the first 5 minutes I concentrated on flying in the main bowl as the wind was very much north of north-west. It wasn't until I ventured into the next bowl west before I was able to climb above ridge height. That was when I looked back towards take-off and saw other gliders lined up ready for launch! The wind dummy must have settled their nerves!

I think the best words to describe the conditions were 'windy' and 'lumpy'. For the wind strength, the ridge wasn't that lifty and it was only the broken spring thermals that popped off that made any reasonable height gains possible. After several attempts I made it all the way down to Truleigh Hill. I was surprised that only a few of the hang glider pilots in the air decided to come down this end of the ridge. At Truleigh Hill, after scratching around at ridge height, I connected with a thermal and climbed to almost 1000 feet above the ridge. Drift over the back was very pronounced, so I had to leave some thermals to prevent being blown over the back without possibility of making it back to the ridge. One particular pilot fell foul to this later on and landed on the ridge just west of the pylons. Luke N. was soon on the scene and landed to assist and re-launch said pilot.

Whilst at Truleigh Hill, after I finally worked out where Ian W's house was, I pushed out from the ridge as far as Small Dole. There was a strange lift line that worked well here but when I turned tail to return to the ridge, no further lift was encountered and I had lost most of my height.

After over an hour in the air I had become wary that the wind strength had increased so set off back to the Dyke for a top landing. As I progressed along the ridge I could see two groups of hang gliders; those scratching in the bowl; some below ridge height, and those 1000 feet+ above the Dyke. If you could get up, it was probably easy to stay up!

I had decided to land just behind the main bowl as this faced directly into wind. When I turned onto final, the glider's speed across the ground fell to almost nil - this confirmed the wind had increased. Even now, some years after my 'incident' at the Dyke, I still find myself a little nervous when it comes to top landings; however today, this was ill-founded and I gently touched down just at the edge of the bowl.

Over the next hour I sat with my glider and drank coffee in the large top field - I couldn't leave my glider for the boisterous calves that showed an interest in the very expensive gliding equipment laid out before them. One in fact, managed to steal a fellow pilot's glove which he later relinquished when the pilot gave chase! This of course, amused me!

By 3pm it felt like the wind had eased a little so I started to ready my glider for another flight. The moment I lifted it, the wind suddenly picked up and all I could do was hold on to the nose for fear of it being looped. As I looked over the top of my glider I saw a pilot on an Aeros Target that had started his landing approach. In the final 5 feet of his descent, the glider dropped from the sky and began to loop. I watched helplessly as the pilot fought to regain control. Fortunately the glider's keel dug into the ground which slowed the glider from being looped and allowed the pilot to get onto the basebar just in time! Unfortunately the keel gave out and snapped off. 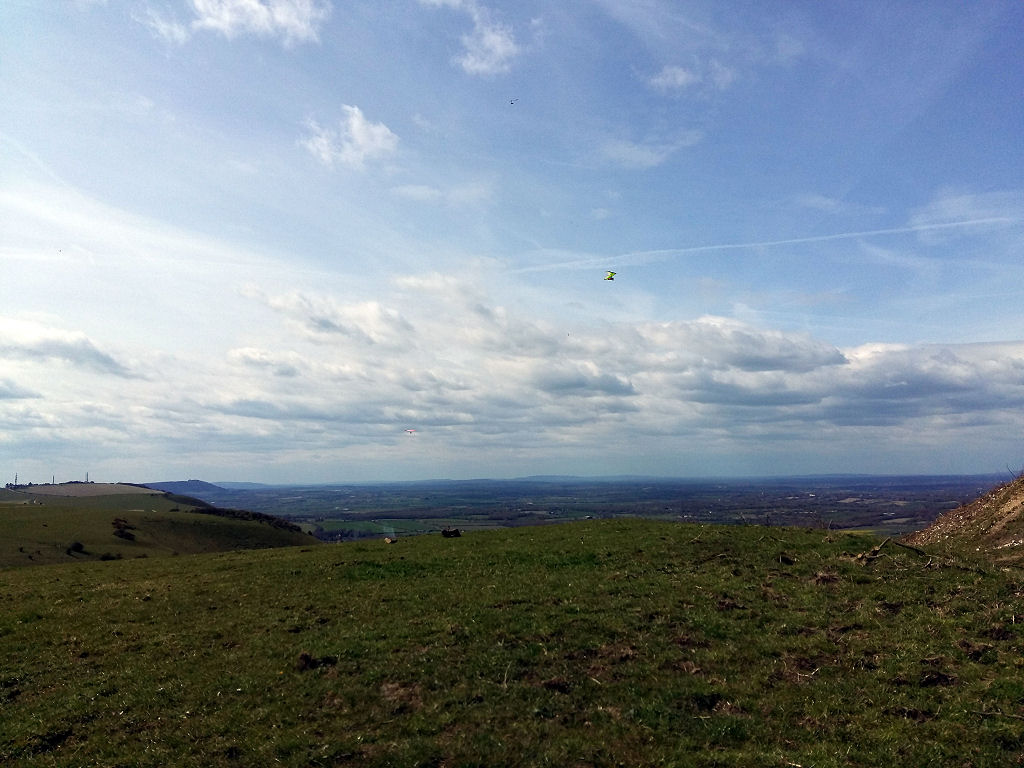 Devil's Dyke Top Landing Field
Looking back out into the main bowl at the Devil's Dyke on a windy day's flying.
24 Apr 2016

After I was able to collapse and secure my glider, I checked that the pilot was ok - he was, just a little gutted! It was then Johnny C's turn to come in. He bled off height over the back field with a series of S-turns before he too was unceremoniously dumped in the final few feet.

That was it for me; I had arrived at the Dyke with intent to practice some top landings, but the air was not the smooth 15mph from the north-west that I ideally wanted; that will be a task for another day! 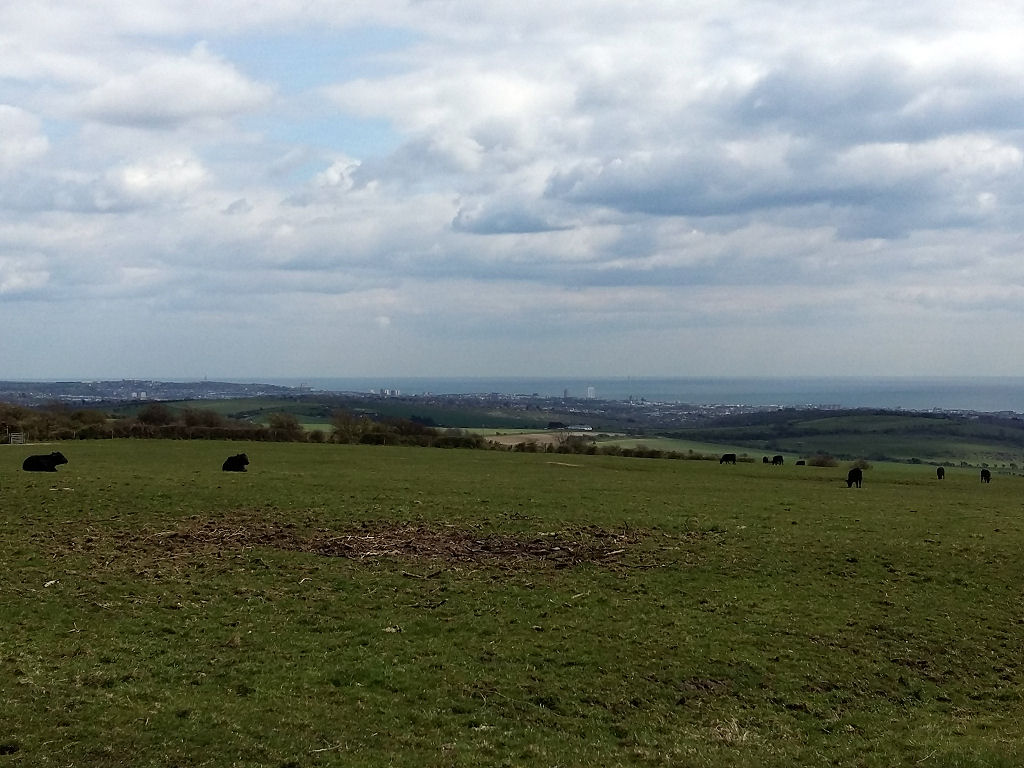 Devil's Dyke Top Landing Field
I didn't want to leave my glider unattended with these cows showing an interest in all the expensive flying kit.
24 Apr 2016